As more information comes out of St Petersburg, it seems that the special measures to police and control people in the city are more intensive than first thought. In the words of one correspondent "a waste of time and resources" (from embedded contacts). 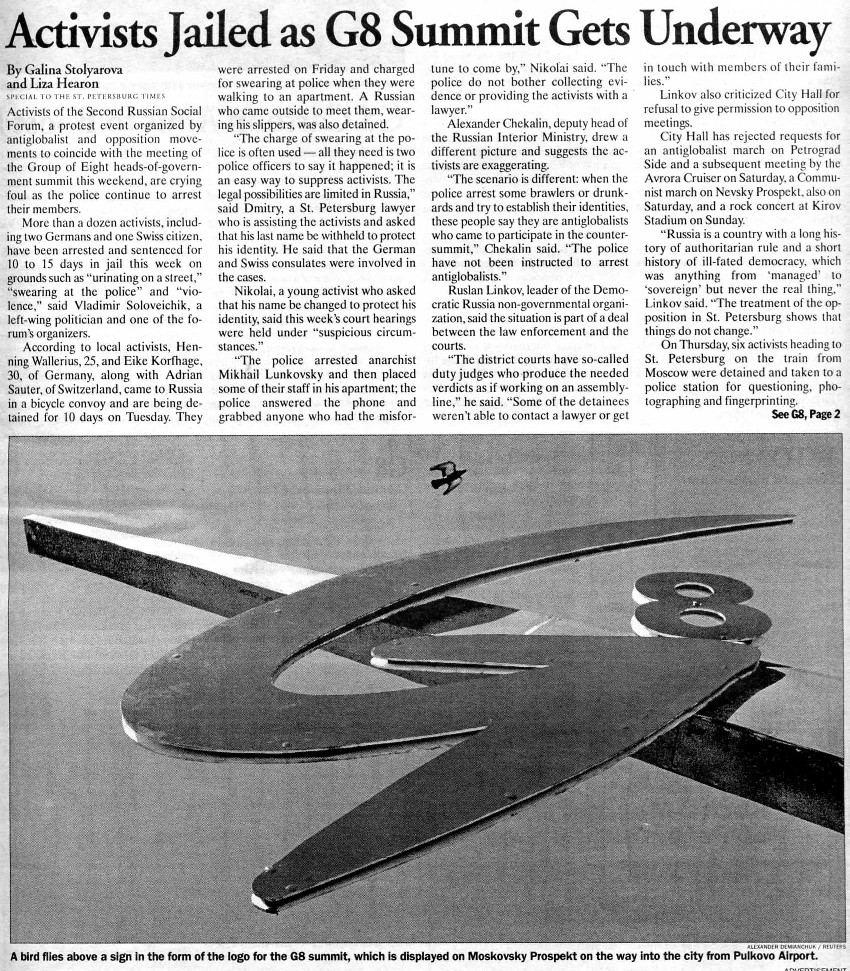 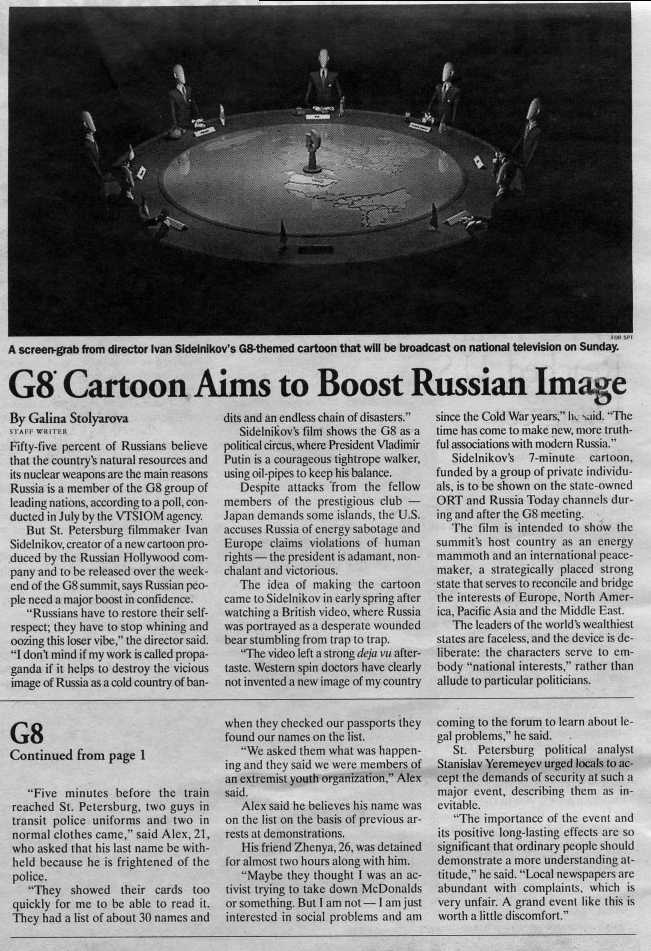 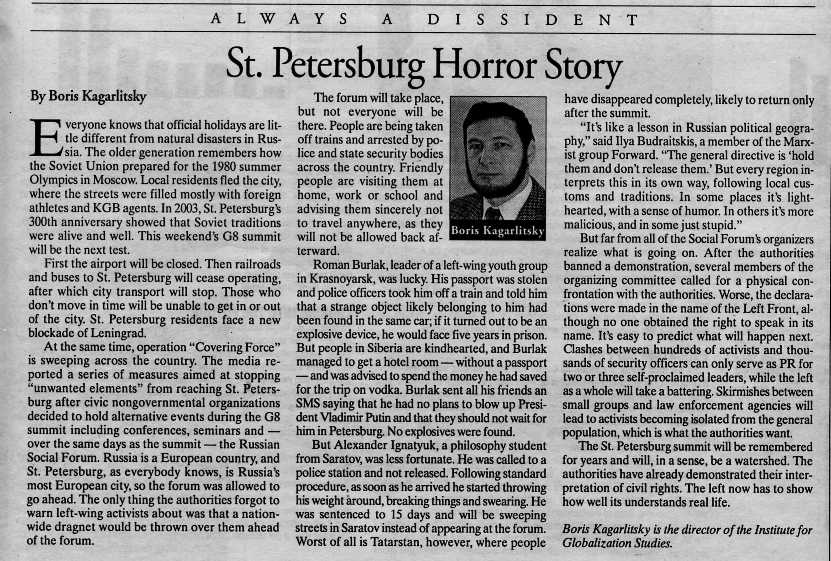 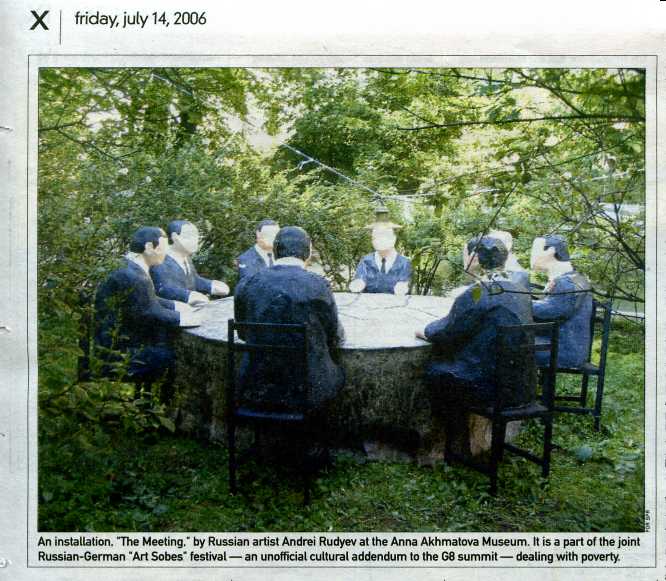 G8 Protesters Arrested in St Petersburg: the week before the summit.

According to independent news websites in St Petersburg, over 100 protesters have been detained as part of President Putin’s campaign to suppress 8 protests in St Petersburg. The omnipresent OMON Police, part of 20,000 extra troops patrolling the city began picking up activists as early as last Friday. If you are lucky enough to have obtained a Russian visa and circumnavigated the closure of both the airport and the Gulf of Finland to have coped with the cancellations of many transport services both in and out of St Petersburg, to actually arrive here, it is fast becoming clear that simply carrying anti-G8 leaflets will get you arrested and imprisoned, most likely for ten days.

Two German cyclists, Henning and Eike, photography students from the University of Bielefeld, were arrested on Sunday evening outside the apartment where they were staying. Travelling by bicycle from Berlin as part of the Bike Caravan 2006, the group hoped to actively protest the summit while demonstrating the examples of alternative energies through cycling and working together along their tour from Berlin to Russia. Despite providing valid identification and passports, they, along with their Russian friend who had come to assist, were taken to the police station for further questioning.

From the time of their arrest on Sunday until their brief release on Monday afternoon, the Germans reported that they were given no legal aid, no food or water and were not advised what they were being charged with. Although Russian law stipulates that suspects may not be held for longer than three hours without charge, the cyclists were held until the afternoon. It was reported that this was due to the lack of an available German translator, however due to current special provisions applicable over the summit period, the period of three hours has now been extended to twenty four.

Police searched the detainee’s accomodation and questioned their neighbours. Initially the detainees were advised that they were suspected of provocative actions against the Russian Federation.

On Monday evening Henning and Eike were redetained and given the specifics of their charge, that they had urinated in a garden. Following this advice they were then granted access to legal advice. They have now been sentenced to 10 days in prison under the charge of ‘hooliganism’. This charge is a favourite of the Russian authorities. It is an umbrella term which includes incitement of racial hatred, causing public unrest, causing danger to public security and order, and public urination. The penalty for this offence is usually either 5-15 days in prison or a fine of 500 rubles (15€). As restrictions in place for the period of the summit rule out the option of the fine, all those charged face imprisonment.

There was also a report that 7 eco-activists from Ekozashita (EcoDefence) and Groza (Storm) have also been detained while campaigning on Tuesday morning against nuclear power near the Bronze Horseman Monument in central St Petersburg. This tourist landmark is within the area where all demonstrations are prohibited. Numerous charges brought against these activists range from using foul language to resist the police to resistance to law enforcement officers. Ekozashita is the same group which managed to stand up during Putin’s speech last week to NGO during the Civil G-8 conference held in Moscow. Members of Ekozashita stood up during Putins speech wearing t-shirts that read “No To Nuclear Power Stations”. At the time Putin appeared not to be perturbed, "Let them be, they came here to express themselves," he told security guards. (BBC) The activists were scheduled to appear in court today and were expected to be sentenced to 15 days imprisonment. 6 activists from the Siberian Confederation of Labour were stopped at Ekaterinburg, searched and accused of carrying dangerous items in their luggage before being removed from the St Petersburg bound train.

These latest actions follow on from systematic police raids on the homes of activists known to the police in the previous fortnight. Police visited their homes, interrogating relatives and neighbours before cautioning activists to avoid participation in any protests. In one case highlighted by the St Petersburg Times, police arrived to find an activist, Vladimir Soloveichik, out, and so insisted on questioning his 67-year-old housebound mother instead. "They asked the old woman whether she ever belonged to any political party and whether she attends any political gatherings or owns a car," Soloveichik said. It was reported on the “Network Against the G8” website Wednesday that Soloveichik, after being previously detained under house arrest had been taken into police custody

The office of the legal team of the Network against the G8 in Moscow was raided on Monday and legal documents relating to activists travelling to St Petersburg and a computer were confiscated. It was reported on independent news website that the FSB (Russian Security Police) gained entry to the flat by posing as the downstairs neighbours and claiming that there had been a flood.

The Second Russian Social Forum which is setting up an anti-globalist camp at Kirov Stadium has now been refused permission to hold the planned protest march on July 15, on the grounds that it would cause discomfort to the general public and the amount of traffic that would be caused. The decision to disallow the march, which was due to leave from Kirov Stadium to the Avrora battleship, a route of approximately 8km, will be appealed. The Avrora battleship is the closest that any demonstration was allowed to approach the city centre which is closed to all demonstrations. A press release from the The ‘Network against the G8’ website suggests that stickers will be the safest way of ‘outreaching’ to the public given the extent of the arrests already reported.