two separate demos in the square grew out of all proportion to their police authorisations. police threatened organisers with arrest in order to disperse the crowds of hundreds 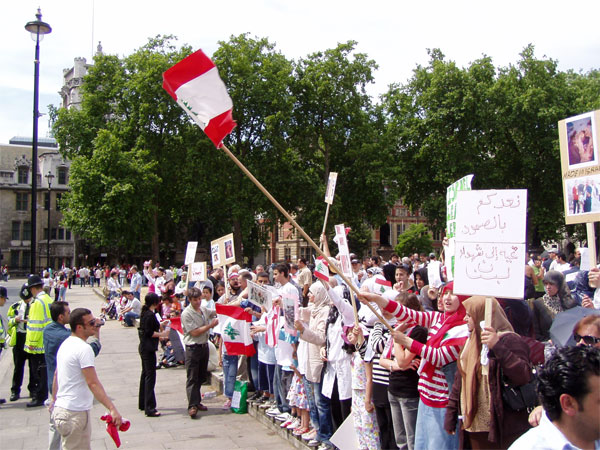 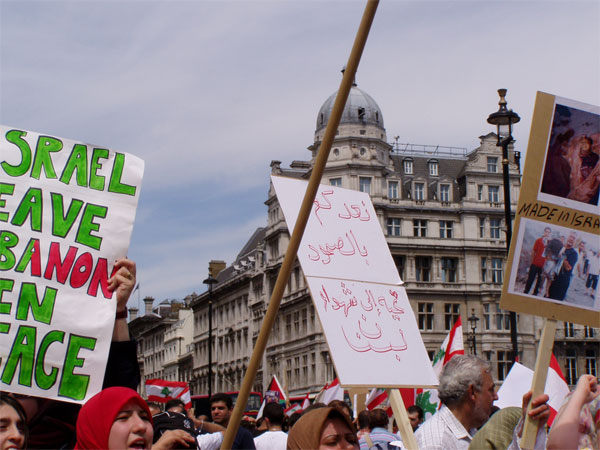 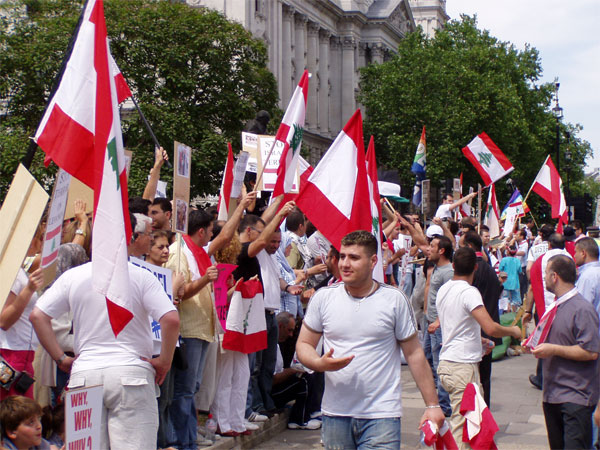 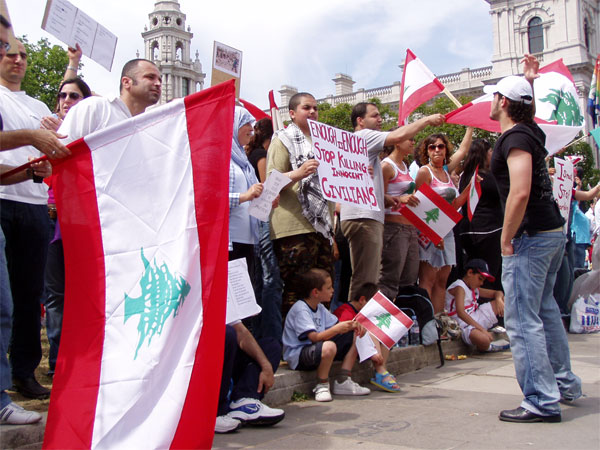 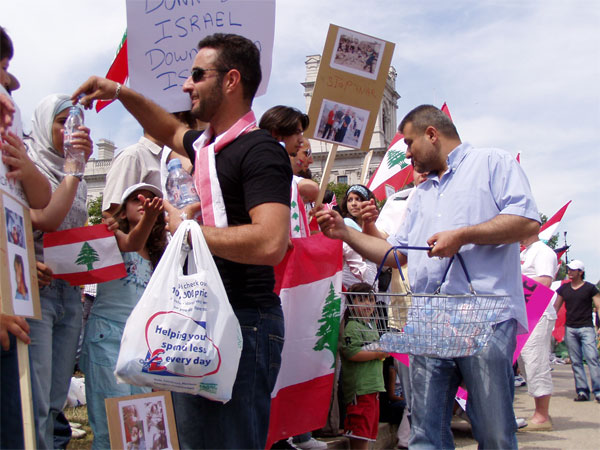 stewards hand out water in the blazing heat 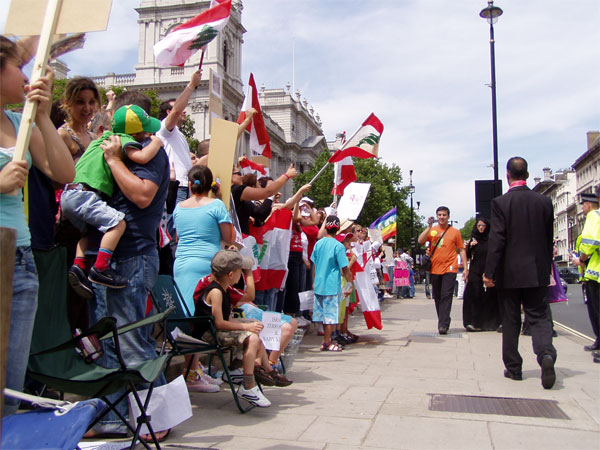 hundreds attend by about 2pm 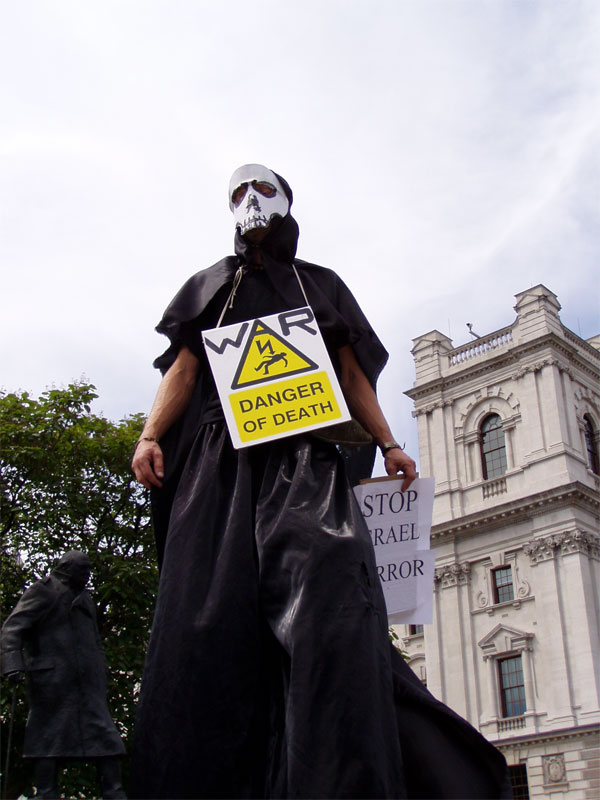 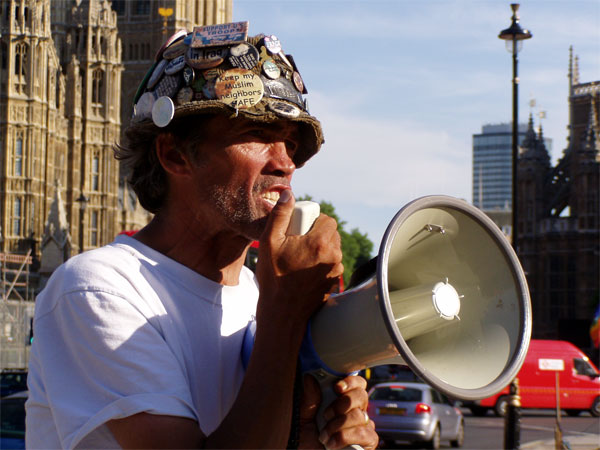 brian haw - the only megaphone allowed

the two demonstrations this afternoon were both on the same issue, against the recent and current devastating israeli attacks on gaza and lebanon. one group, school students against the war, were expecting up to twenty to take part, and received authorisation over the phone for the demo to go ahead with just over twenty-four hours notice. the second group, a lebanese welfare group, also expected small numbers of around 50.

but from one 'o' clock onwards, it was clear a much larger gathering was forming as more and more people arrived, and police reinforcements were quickly called in to contain the crowd and monitor the situation.

in charge of the police operation, inspector lewis said that the demonstration was now effectively illegal under socpa legislation and that the police had contingency plans to close it down with arrests "an option".

with hundreds of demonstrators now in the square, the situation could have been tense, but a combination of factors favoured the authorities. first, the police gave the organisers a long timeline of more than an hour before their ultimatum, and with the blazing heat, protestors may not have had the energy to continue much beyond this. second, organisers were aware that among the demonstrators were appreciable numbers of people who were applying for asylum, or had some limited refugee status, and so would not wish to have any sort of problems with the police.

so, at shortly before the deadline of 3pm, stewards scrambled around the crowd warning them to disperse and collecting banners and placards, swiftly carrying them away to nearby vehicles. and soon after 3, parliament square looked like nothing had happened, as small groups of people sat in the sunshine or picnicked, and most of the police left.

and in a way, it really was as though the demonstration itself hadn't happened. the mainstream media were absent. the politicians responsible for the deafening silence over war crimes were not at work. even passers-by were only aware of some shouting, some banners, and a colourful display. they couldn't hear the issues because under socpa legislation megaphones are illegal in the designated zone around parliament.

so this demo was a model of modern british protest - made impotent by socpa and media bias.

such a large congregation would not have been tolerated by police had it been a weekday, and anyone bold enough to try using a megaphone would have been instantly arrested. if today stewards had stood up to the police ultimatum and stood up for the free speech we fought for for hundreds of years and lost under bliar's watch, then a violent crackdown would have been likely.

socpa itself is in the process of being challenged at every level. i believe that every single conviction so far (nearly thirty of them) is going to appeal, and activists like maya evans (who was the first person charged under the new law) will take her fight to rid herself of a criminal record for caring, all the way up to the european court.

the sunday anti-socpa campaigning picnics still take place every sunday afternoon in the square from around 1pm or so (www.peopleincommon.org), and brian haw and his supporters welcome folk to join them (especially overnight) in their more than five-year peace vigil in the square (www.parliament-square.org.uk). brian's own legal challenges against the law are progressing, and he recently won the limited right to use a megaphone under permission from westminster council, despite the general ban proscribed by the socpa act.