Brighton Arms Dealers Blockaded Now - You Can Support the Blockaders

In the early hours of Monday morning protesters erected two roadblocks outside each gate of EDO MBM Technology Ltd preventing vehicle access to the factory. Activists locked themselves to barrels filled with cement in front of the gates.

Sarah Johnson, press spokeswoman for Smash EDO, said ‘In the last weeks Israel has engaged in an illegal assault on the civilian population of Gaza and has now invaded Lebanon killing hundreds of Lebanese civilians. These are war crimes under international and English Law. Israel could not carry out these acts without the support of foreign corporations. EDO MBM is involved in the manufacture, supply and development of lethal weapons for use by the Israeli military. They are ancillary to Israel’s war crimes and Paul Hills, the Managing Director of EDO MBM, should be arrested and prosecuted under the International Criminal Court Act 2001’.

Protesters hope to disrupt production of weapons which could be used in further war crimes.

EDO MBM manufactures components to be incorporated into the Hellfire missile, which the Israeli army recently used to attack the civilian population of Gaza. They have organised conferences on the development of UCAVs, unmanned aircraft which are widely used in aerial attacks on Gaza. EDO Corporation, of which EDO MBM Brighton is a wholly owned trading unit, has a direct contract with the Israeli Navy who murdered 10 civilians on a beach near Beit Lahiya, Gaza, earlier this month.

Andrew Beckett, press spokesman for the campaign, said ‘The current Israeli
onslaught on Gaza and Lebanon is being conducted with the help of weaponry made in Brighton. Today’s blockade is to show that we will not tolerate EDO MBM’s continued presence in Brighton and Hove, a UN Peace Messenger City.

EDO MBM Technologies Ltd are the sole UK subsidiary of huge U.S arms conglomerate EDO Corp, which was recently named No. 10 in the Forbes list of 100 fastest growing companies. They supply bomb release mechanisms to the US and UK armed forces amongst others. They supply crucial components for Raytheon's Paveway guided bomb system, widely used in the "Shock and Awe" campaign in Iraq.

People involved in the anti-EDO campaign include, but are not limited to: local
residents, the Brighton Quakers, peace activists, anti-capitalists, Palestine
Solidarity groups, human rights groups, trade unionists, academics and students. The campaign started in August 2004 with a peace camp. It's avowed aim is to expose EDO MBM and their complicity in war crimes and to remove them from Brighton. 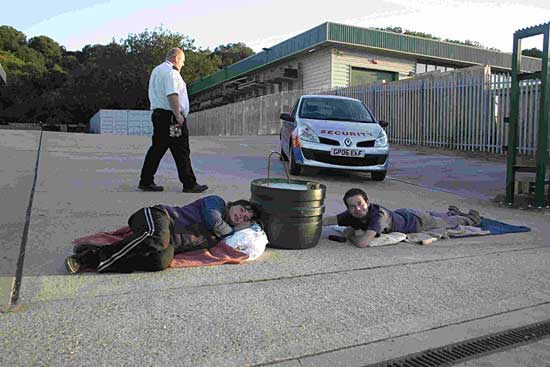 As of 1:39pm three protesters remain in the baking sun blocking all traffic at Brighton's death merchants.