arrested for trying to deliver a letter

activist steve jago was stopped and searched twice this morning and then arrested. he was trying to peaceably deliver an open letter to met commissioner sir ian blair. he has so far been prevented from doing so 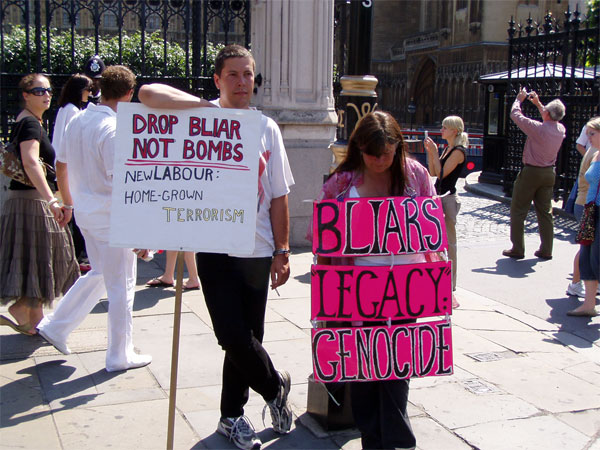 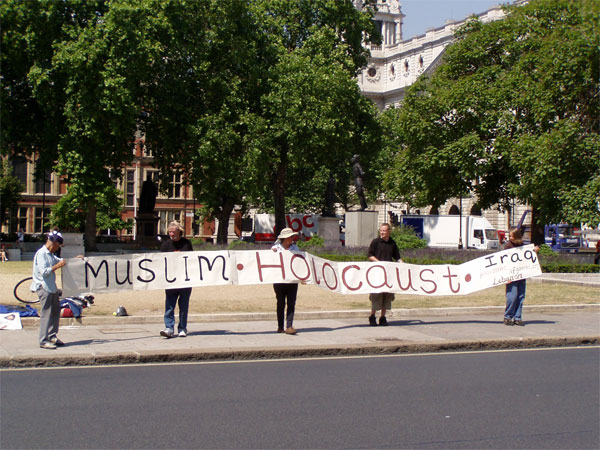 new banner at the square for blair today

just after 9am, barbara tucker and steve jago set off from parliament square to go and deliver an open letter to met chief sir ian blair at scotland yard.

they got no further than the first corner before they were stopped by police and asked where they were going.

after a grilling under the prevention of terrorism act, they were allowed to continue for a while, but as they arrived outside scotland yard, they came upon more police.

they explained that they had come to deliver the letter, and at first the police said that they could do so after they had been searched. steve was dressed in a t-shirt and trousers, and carried a banner in one hand and the letter in the other. he was thoroughly searched in the street, but once satisfied he was no threat, police continued to bar his way to the reception at scotland yard, thus reneging on their earlier commitment.

next thing, they encircled him, slammed in in overtight handcuffs, and called a van, which arrived shortly after with siren and lights in full emergency mode. they informed him they were arresting him for 'breach of the peace', and he was driven to belgravia station. barbara was not arrested.

at belgarvia nick however, there was a small voice of sanity in that the custody sergeant pointed out that for 'breach of the peace, the cops should have taken steve round the corner, and released him, not brought him into the station.

steve then insisted on being processed fully so that he would be able to make yet another complaint of unlawful detention and harrassment to add to others including assault, malicious arrest, unlawful arrest, and possibly even torture, arising from his habit of walking round the socpa zone with famous quotes on a white banner.

after being held in a cell for half an hour he made it back to parliament square in time to try to greet tony bliar arriving for his last prime minister's questions before the recess. barbara and steve tried to take up position in between the gates of parliament as they have done before, but they were pushed and shoved into the cordon. this was unnecessary, as the spineless bliar sneaked in the back way for this, his last face to face in the commons.

meanwhile, brian haw was exercising his right to use his megaphone in the square, and his supporters were holding a large newly made banner for all to see.

later, barbara was 'reported for summons for holding an unauthorised demonstration' which brings her total of summonses to more than forty now. she filed a notification with charing cross police earlier in the year, but they have failed to authorise her protest as required under socpa legislation, instead, continually harrassing her in the streets.


the letter steve was attempting to deliver is reproduced below. we know police read indymedia, so perhaps they could copy it and pass it on to their great leader since it now appears to be illegal to deliver it:

At approximately 7.15pm on the 17th July 2006, a gentleman by the name of Mr Sinha delivered to Charing Cross police station a notice of demonstration, same as attached but completed, as required by section 133 of the Serious Organised Crime and Police Act 2005 (C.15) (Socpa 2005). I witnessed this and was very concerned to see the officer on the desk, CX 695, actively seek to refuse to accept the notice.

Mr Sinha had properly delivered the notice ‘to a police station in the metropolitan police district’ in accordance with section 133, sub-section 5(a) of Socpa 2005 as witnessed by myself and several others. At around 7.15pm, Mr Sinha placed both sheets of the notice (printed on A4 paper) on the officer’s side of the desk window after the officer, CX 695, had walked off just after clarifying that he was refusing the notice, giving as his excuse for this appalling behaviour that it was not requested on an application form.

I hope that I don’t have to remind you, notice is not required to be on the metropolitan police’s own ‘application form’. I would like your assurance that this notice has not been ‘lost’ by your officers and that you will be fulfilling the duty placed on you by section 134, sub-section 6 of Socpa 2005 by giving ‘notice in writing’ of the authorisation to Mr Sinha in order that he does not suffer any further injustices.

I would also like an assurance from yourself that this notice has been received and written notice of authorisation given. I look forward to hearing from you, if you have any further queries regarding this matter please do not hesitate to let me know.