This Tuesday members of Oxford World Development Movement staged the "G8 Olympics" in Cornmarket Street to draw attention to the lack of aid and debt relief for countries of the developing world, and to highlight the unfair trade rules which make and keep them poor. Campaigners dressed as Bob Geldof and Bono cheered on as others dressed as Blair and Brown failed to deliver on aid, debt and trade, while corporate fat cats pocketed lucrative contracts. 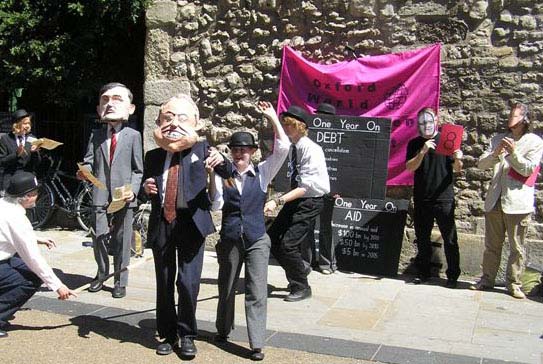 Corporate fat cats are overjoyed at the strings attached to aid 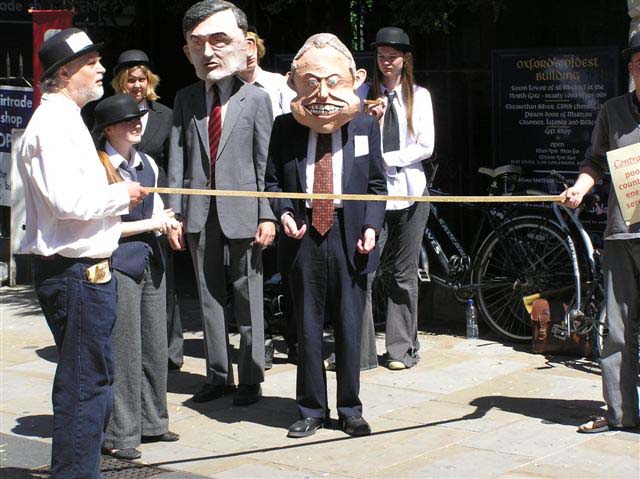 Tony and Gordon faced with the barrier of trade rules... 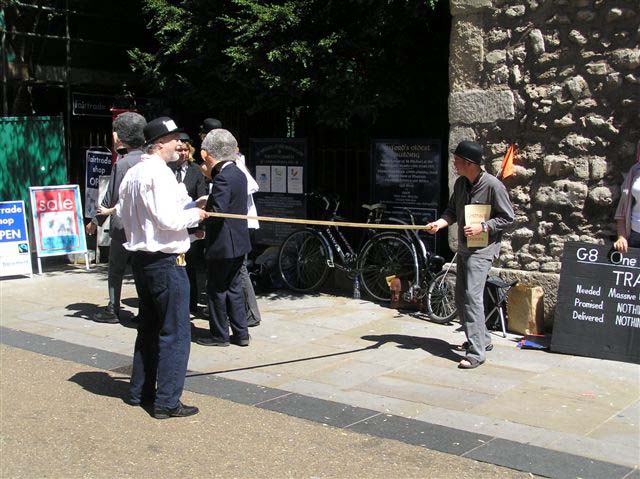 Oxford WDM Secretary Kevin Meaney said, "After all the effort that people from Oxford put into campaigning to Make Poverty History last year we feel it's important that they know the promises have not been kept. We hope this event will encourage people to demand more action from their elected representatives."

In the year since the last G8 Summit one child every three seconds has died from poverty, conflict and disease, while one woman every minute has died during pregnancy and childbirth. We now face a situation where most developing countries stand to lose more than they will gain from the agreements made by the G8 last year.

Kevin Meaney said, "The most important promise, that poor countries would be allowed to decide their own economic policies, has been broken. Poor countries are being forced to privatise their water services, cut public services and open up to free trade before they are given the debt cancellation they were promised last year. We need to keep up the pressure on the Government to deliver a fair deal."


1. The World Development Movement was founded in 1970. We campaign to tackle the underlying causes of poverty and lobby decision makers to change the policies that keep people poor. We research and promote positive alternatives, working closely with grassroots organisations in the developing world to stand up to injustice.