Taking advantage of a free pop festival in the Parkers Piece park, Cambridge Action Network braved the heat on Saturday the 15th of July, to hand out reading matter to the passing crowds as a public education action. 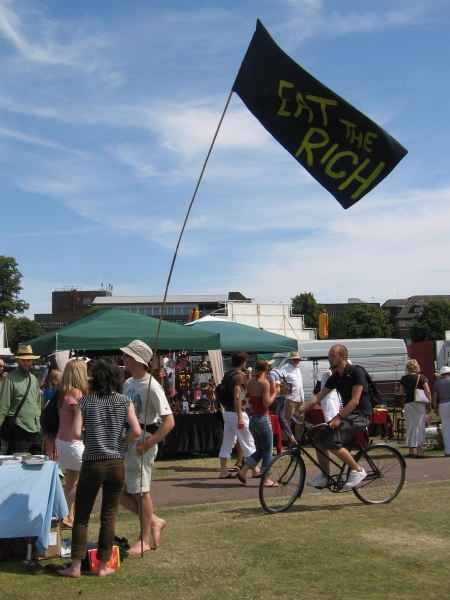 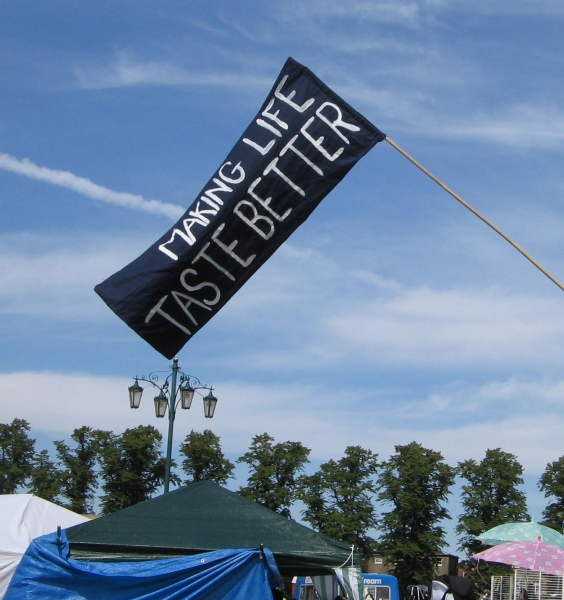 Along with paper copies of Chomksy's latest (

http://www.zmag.org/content/showarticle.cfm?SectionID=107&ItemID=10537 ), they gave away about a hundred leaflets on the suppression of anti-G8 protests in Russia. Sharing the stall were Faslane 365, the civil resistance project for the disarmament of Britain's Nuclear Weapons by a continuous year-long peaceful blockade of the Trident base at Faslane (see

This was also the first unfurling of CAN's rather lovely new flag.


Text of the G8 leaflet:

Today the Group of Eight (G8), the unofficial "world government" of Canada, France, Germany, Italy, Japan, Russia, the United Kingdom, and the United States, will attend the 32nd G8 Summit in some suburb of St. Petersburg, which is in Russia somewhere. These countries together represent approximately 65% of the world economy. They are equally responsible for global warming, unfair global trade, the extreme poverty in Africa, the extent of the AIDS problem due to a strict medicine patent policy... Not to mention the various wars and conflicts currently being waged across the world, including those on abstract nouns such as 'terror'.

Wherever and whenever the eight 'world leaders' meet, they are met with dissent. Some try hard to physically shut down the G8 Summit, others work on generating debate and discussion by holding counter-conferences. There's the independent media, fighting the bias of the corporate press, independent medics and legal teams, supporting the people in the streets.

Then there's the people, who come from every walk of life, united by their desire for a better world. This is the 'Movement of Movements' that believes another world is possible, that involves many skills, many tactics and a whole lot of people.

As expected the Russian state has met the dissent and opposition with violence and repression. Even before the summit started the number of violations against civil and human rights reached more than a hundred. While massive violations of basic freedoms were reported already weeks before the summit of the G8 in St. Petersburg, as the summit opened more protesters were arrested in Russia.

Participants of the Russian Social Forum, which was held in St. Petersburg on July 13-15, were not allowed to have a march, although they asked the city hall about it weeks before. Police has blocked them at the Kirov stadium, where the forum was held, and prevented from taking to the streets of the city.

Relatives of activists have been threatened – like the mother of journalist Vlad Tupikin from Moscow. She was met by two policemen on the streets who entered her apartment and threatened her with future visits and repercussions when she refused to tell them of her son's plans for the summit.

There's Vasilii Starostin, his son Jegor and another comrade from the Siberian Workers Union in Omsk, Elena Girde, who have been detained in Ekaterinburg, while they were traveling to St. Petersburg. After a long and heavy interrogation, where they have been threatened with a court case on being involved in “extremist’s” activities, the police and Federal Security Service 'advised' them to travel back to Omsk.

People have been beaten for holding banners in St. Petersburg Square. People, like Ilya Ponomarev one of the organisers of the Russian Social Forum, are being beaten in prison after being arrested for trying to voice their opposition.
Eight men meet to decide the fate of the world, and we have no right to oppose them, no right to disagree. When we do, the police meet us with violent repression, no matter how peacefully we dare to express our dissent. Will our Prime Minister stand up to the Russian state, boycott the summit in protest to the violent police repression?

Yesterday two people were arrested at Russian Chamber of Commerce in Southwark, London, for the crime of holding a banner – the crime of dissenting.