Norwich protesters are outraged at Tony Blair's lack of will in calling for an unconditional ceasefire to the deepening crisis in Lebanon, Palestine and Israel 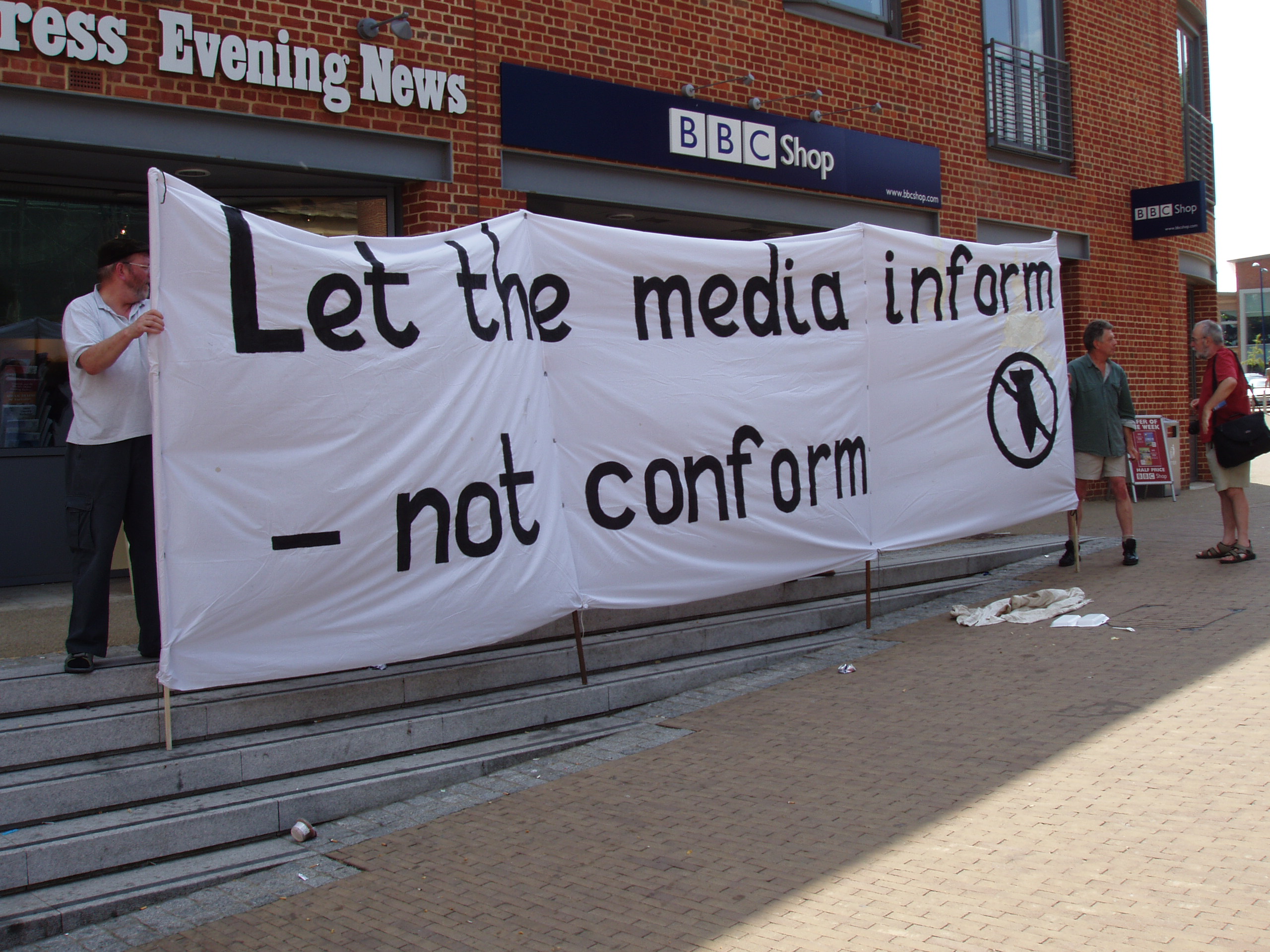 Let the media Inform not Conform

70 demonstrators gathered under a beating sun outside St Peter Mancroft Church, Norwich, on Saturday, facing the Forum and BBC East, with placards demanding ‘Unconditional Ceasefire Now’ and a 2m banner declaring ‘Let the Media Inform not Conform’. The protestors were outraged at the government’s failure to demand a ceasefire to the violence continuing in Lebanon and Israel, and were protesting at the plight of the Palestinian people, particularly those caught in the bombardment of the Gaza Strip. The protesters expressed their anger at the situation, particularly in Lebanon, which is sustaining the highest level of civilian casualties and damage to its civilian infrastructure. The loss of life was seen as unacceptable on both sides of the conflict.

As a public service broadcaster, the BBC has an obligation to inform the British public of current national and international events in a balanced way. In the context of the current conflict between Israel and Hizbollah, we note the BBC’s failure to interview Lebanese officials, including members of Hizbollah who serve in the Lebanese cabinet, with the same regularity as Israeli political and military leaders are interviewed.

This omission hinders people’s understanding of the conflict and their ability to hold the British government to account with regard to its failure to work towards an immediate and unconditional ceasefire. We note that this policy is causing hundreds of civilian casualties and provoking a humanitarian crisis in Lebanon.

The BBC is, was, and always will be (unreformed) solidly behind each and every Israeli war crime. However, they do need mechanisms to deal with complaints about their sickening racism.

Thus the BBC states that it obeys the dictates of the Israeli government, to protect its own journalists.

Of course JACK STRAW, as Blair's previous minister-for-murdering-muslims (foreign secretary before Beckett), worked tirelessly to prepare for the destruction of Lebanon by working to have all branches of Hezbollah and similar muslim resistance groups declared 'terrorist' within the EU. This would then give the BBC an excuse from excluding interviews with Lebanese and Palestinian politicians and leaders, as Israel began the genocide of these people.

Today, the Sunday papers are once again full of BLACK PROPAGANDA LIES suggesting that Straw is at odds with Blair. BLAIR WOULD HAVE BEEN UNABLE TO GIVE ISRAEL THE GREEN LIGHT TO DESTROY GAZA AND LEBANON IF STRAW HAD BEEN UNSUCCESSFUL IN DEMONISING MUSLIM RESISTANCE GROUPS.

However, during the time of the nazis, Goebbels and others often created phoney stories detailing disputes between top ranking nazi leaders. Sometimes these were for domestic consumption, and sometimes they were intended as mind-games aimed at foreign powers.

The only fact given by the reports in the Sunday papers is that Blair has given explicit permission for US bombs (paid for by US and German taxpayers) to be shipped to Israel as quickly as possible via UK airports. This bombs are explicitly designed to destroy the shelters that Israeli drones have identified as holding the civilians sheltering from Israeli attacks on their towns or cities. ETHNIC CLEANSING DOES NOT WORK IF PEOPLE REFUSE TO LEAVE THEIR HOMES.

Blair DOES NOT seek to rally the troops in the UK. Why? Because Blair fights his wars via his proxy army, the US armed forces. Blair can allow the sheep of the UK to believe any old crap.

QUOTE
PRIME MINISTER BLAIR: The message is very, very simple to them. It is that, you have a choice. Iran and Syria have a choice. And they may think that they can avoid this choice; in fact, they can't. And when things are set in train like what has happened in Lebanon over the past few weeks, it only, in my view, underscores the fact they have this choice. They can either come in and participate as proper and responsible members of the international community, or they will face the risk of increasing confrontation.
UNQUOTE

IF YOU NEEDED BLAIR TO PAINT YOU A PICTURE, THEN I THINK YOU WILL FIND THAT HE HAS DONE JUST THAT. Blair states clearly, and without ambiguity, that the destruction of Lebanon down to every single service that humans need to live and survive, is his model for what he intends to do to Syria and Iran. In the 30's, if you gave a damn (and most didn't), you would have noticed that Hitler like Blair laid out EXACTLY how he intended to proceed.

BLAIR IS MORE POWERFUL TODAY THAN AT ANY MOMENT IN THE PAST. He has no enemies of ANY significance, and every key organisation in the UK is in the hands of New Reich loyalists. The EU has been completely turned by Blair, and stands ready and prepared to back and participate in the next round of Blair's aggressive wars. All the sheep in the UK can do is dribble to themselves about how Blair's own mass media has promised them that the war will be over by xmas, whoops I mean Blair will be gone by xmas.

Without a shadow of a doubt, the majority of the UK population realises that Israel acts in ways no different from nazi Germany, and deserves the same fate. So why does Blair worry about this so very little. COULD IT BE PERHAPS THAT BLAIR ***KNOWS*** THAT AT THIS STAGE, HE NO LONGER HAS TO GIVE A DAMN ABOUT WHAT YOU AND I THINK, REGARDLESS OF HOW WIDESPREAD OUR OPINIONS. After all, the German people were against Hitler's plan to attack Poland (I think you can work out why), but by that stage Hitler didn't have to give a damn either.

You think you want a ceasefire, but Hitler arranged ceasefire after ceasefire during his military campaigns leading up to Poland. The Lebanon is nothing, in the scale of things, to Blair. A Hitler-style ceasefire is actually part of his plans. Even Syria is nothing. Iran is the goal.

If a ceasefire is arranged (and it will be so if Israel cannot be persuaded to engage Syria), it will only happen to allow Blair to arrange the circumstances that bring Syria and Iran into the conflict. How? Simple, by ensuring the ceasefire REWARDS Israeli atrocities, and that such a ceasefire is only maintained if Syria and Iran agree to an ever increasing series of humiliating and destructive terms. Blair will keep punching the muslims in the face until they strike back, at which point his media will inform us that he is entitled to attack Syria and Iran.

AT NO POINT DID BLAIR EXPECT TO ALLOW THE ISRAELIS TO KEEP STRIKING LEBANON, IF SUCH ACTION WAS NOT CLEARLY ESCALATING. The Gaza/Lebanon ploy is simple to raise the temperature yet again, and take advantage of opportunities as they arise. Remember that Blair and Israel had planned these atrocities for more than a year (with Straw's work being essential). For Blair's Israeli allies, at worst they get to push their opponents back ten years again. For Blair's Iranian allies, they get an apparent distraction against the US attack against them, and build the case for UN hypocrisy.

While the Iranians calculate the Blair is helping them more than he is hurting them, they couldn't be more mistaken. Blair knows that there is ZERO chance of arranging an Iran war through the UN, but follows this pretence NOT for effectiveness, but to keep certain people on board. Rather, Blair knows that the more fires he lights in the Middle East, the closer Iran comes to burning down. WORLD WAR IS A TIME WHEN ALL RULES ARE FORGOTTEN. Blair knows that his genocide of Iran will pretend adherence to no rule of law. Thus he is happy to hand straws to Iran for them to clutch at.

BLAIR IS GOING TO WAR WITH IRAN, AND EACH AND EVERY ONE OF YOU NOW KNOW THIS IN YOUR HEARTS. So what happens next? We choke on the same fears that kept the citizens of nazi Germany so passive? We keep our mouths shut, and pretend that there can be a future so horrifying that it could never arrive in our reality? We become self-deluding idiots that suck up every planted story about the downfall of Blair? We tell ourselves that being nazis ain't so bad, because at least we will be on the winning side (yeah, that really worked for the last lot of people to try that one)?

BLAIR HAS NO POWER SAVE THE POWER WE GIVE HIM. Do you know this has been true of every great mass murdering monster in history? Problem is that passive support is every bit as good as active support, once the monster has had enough time in power to make appropriate changes to the state. Blair simply had to isolate each of us as separate individuals. Then it doesn't matter if some of us scream daily at his evil, for the chances of our message spreading is near zero. Only Blair gets to speak to the entirety of us through his mass media newspapers and TV broadcasts. Rather, most of us are scared, and convinced that the majority of the others must be in some sense approving of Blair's growing atrocities, or else Blair would be gone by now.

Most of all we must fear punishment. When Blair ordered the 'underground tube murder', few were prepared to look at the psychological purpose of such an act. Blair orders his agents to say 'conspiracy' once every few lines, and few have the confidence to break their pavlovian conditioning to such tactics.

Hitler took a pride that 'his' people had been similarly limited by a ruthless education system (in place long before the nazis). He knew that the purpose of such conditioning was to give the people predictable buttons that those in power could push at will. Hitler's 'genius' was to understand the full potential that could be unlocked by a proper understanding of these 'buttons'.

At some point, the main 'button pressing' phase is largely over. For us it is (at the moment). For the population of the US, who are tasked with proving the main initial bulk of Blair's fighting forces, it is not. Blair's evil speeches given side by side with his puppet Bush are of a completely different nature from anything spoken here. Every citizen in the US gets to hear Blair, on every national TV station, and in every newspaper, give his absolute support to Israeli atrocities, and his absolute promise to help attack Syria and Iran. For Blair's neocon allies (for whom Blair is their president, not the drunken frat-boy idiot Bush), their Fuhrer could not have given a better performance.