AKBAYAN (Citizens' Action Party) today joined the various groups which trooped to the streets to express opposition to the State of the Nation Adress (SONA) of Philippine President Gloria Macapagal Arroyo (GMA), saying GMA's SONA promises will not make up for the fact that she is the center and crux of the country's crisis right now. 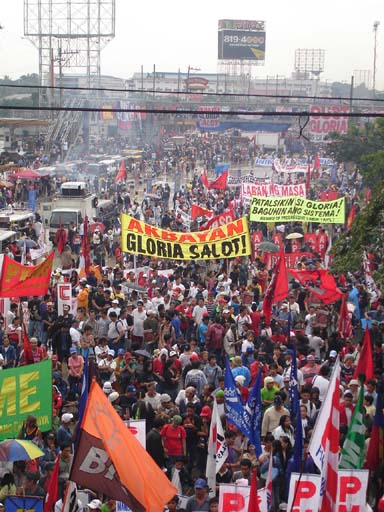 "It's a waste of time," said AKBAYAN President Ronald Llamas. "Whatever growth and projections she flaunts on her SONA will not amount to anything -- people everywhere are expressing anger at her, more and more families are rating themselves as poor, peasants are being killed for the lands they should own and media people are being killed for being critical and amid all these mess is a President bent on staying in power at all costs."

Llamas added, "it is the central issue of legitimacy and accountability that GMA should face if she could muster the guts for it."

"Instead," he added, "what she is doing is hiding behind redefined statistics and twisted logic to put up a front of strength and stability."

Llamas said GMA's SONA on jobs creation "begs the question of a real jobs deficit with government's decision to redefine the term 'unemployed' and tinkering with poverty threshold levels and income data to project the illusion that there is progress and it is being dispersed."

"She is also evading the very urgent question of military and police-perpetrated violence against activists, media people and farmers and instead blaming it on communist rebels," explained Llamas, "and yet the likes of Palparan are safely ensconced in power."

"The threat of destabilization is hyped to further justify crackdowns and arrogating more police powers unto her office through EO 464 and PP 1017 and yet we are no more safer nor secure with her still President," added the veteran street parliamentarian.

"What we want is still the same, which is her ouster from office," said Llamas. "GMA is limping her way through the days with only taxpayers' money propping her up and she should be hauled to jail for failing to account for the Marcos wealth, the alleged bribery of bishops to the jueteng payoffs which run the line all the way to Malacañang."

"Never has anyone misgoverned the country while putting up an illusion of a 'new society' on the rise since the 70s, and we all know where that dictator ended up," said Llamas. "it is time to do the same to this aspiring dictator."