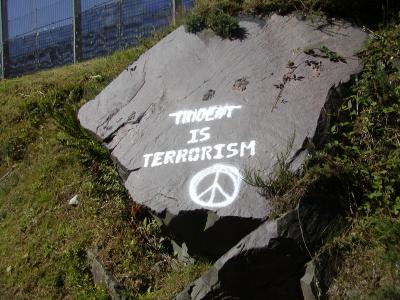 For years a rock slab at the perimeter of the fence has been an important additional notice board at the base, alerting unsuspecting passers-by to what is going on behind the razor wire. Last year the base authorities had the slogan painted over but last night Sylvia Boyes (62), from Keighley inYorkshire, and Jane Tallents (48), from Helensburgh, repainted it with the legend: TRIDENT IS TERROR. They had time to complete the task before being arrested and charged with malicious mischief. They were released after a few hours in custody.

Sylvia said: “Britain’s Trident is the ultimate terror weapon. We were determined that the true nature of Faslane is publicised.”

Anti-Trident protesters have gathered for a disarmament camp at Peaton Wood on Loch Long, just half a mile away from RNAD Coulport where nuclear warheads are stored and loaded onto Trident submarines.

The camp, organised by the non-violent direct action campaign Trident Ploughshares, has been an annual event since 1998 and in recent years has involved a wide range of protest and disarmament activity, including swimming into the Trident submarine berths, intrusions into the secure areas of the Faslane and Coulport bases, blockades at the gates of the bases, and “redecoration” with graffiti.

Photos of todays action are available at