Democracy is becoming a dirty word

How the concept of democracy is being used by neofascist leaders in order to justify a capitalist system that is falling apart at the seams. 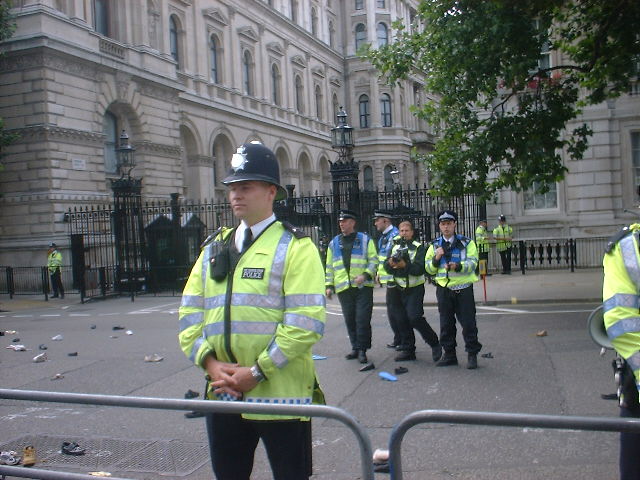 Smile nicely for the camera

The concept of democracy has in general, always relayed connotations of freedom and responsibility. Freedom of speech, movement and choice of representative with its concommitant of responsibility, responsibility to uphold freedoms and participate in the democratic process. Now the 'axis of evil' , namely US,UK and Israel has taken the concept of democracy and turned it into an exscuse to invade and kill in the name establishing democracy as a guise for their relntless pursuit of trade and oil, biased in their favour, we are all left with a bad taste in the mouth. I
In a democracy based on principles of justice and equality for all we all have a responsibility to take to the streets and protest when we see our governments joining in the murder of children. It is interesting that at the demonstration on 5th August 2006 as on other demonstrations we are faced with a police force that takes as a given that they should, and have the right to take photos of people exercising their right to protest. If we live in a democracy (which I no longer believe is the case as we ar under constant surveillance and monitoring mechanisms) why would he police need to take photos of us exercising our rights? The UK needs to wake up and smell the lies we are constantly being fed as the majority of the population sleepwalk further into a fascism that will in the very near future be all encompassing, truth lays wounded for now, don't let it die on us.