Around 30 local people held a protest in Lancaster on Sat 5th August. We were protesting against the Israeli agression in Lebanon and Gaza, and the role played by the British and American governments in promoting this state terrorism. 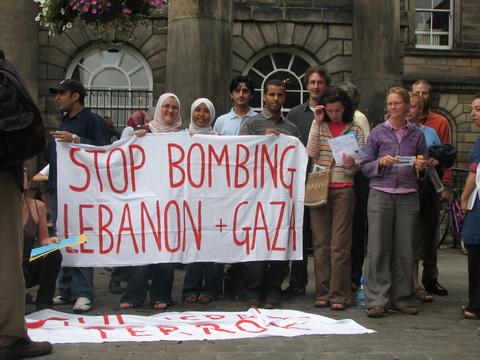 We held a dramatic 'die-in' in Lancasters market square, which attracted the attention of hundreds of shoppers and passers by on this busy Saturday. During this action we also handed out hundreds of leaflets and gathered many names on a petition. We held up banners saying 'Stop Israeli Terror' and 'Stop Bombing Lebanon and Gaza'.

Our action groups is diverse and unites Jews, inclusing Israeli citizens, along with Muslims, Christians, Atheists, Socialists, Pacifists, Feminists, Gay rights campaigners, Greens, anti-capitalists, pensioners, Students and others in protest against this bloody imperialist war. The protest was held at the same time as the amazing 100,000 strong protest in London, and helped amplify its impact locally. We are now uniting with Lancaster CND, Lancaster Stop the War Coalition and many others to get a large turn out for the protest outside the Labour Party Conference in Manchester on Sept 23. The local press turned up to cover our protest and carry our message further. We are determined to turn the tide against imperialism, racism and war. We worry that the attack on Hezbollah is the preparation to an attack on Iran or Syria and a wider war. Also, as the protest fell on the anniversary of the genocidal US atomic boming of hiroshima 61 years before, we became more determined to disarm our imperialist rulers of their weapons of mass destruction.