US spies in the UK – the vigil continues

The Menwith Hill spy base near Harrogate in North Yorkshire is the largest electronic monitoring station in the world. Run by the National Security Agency (NSA) of the United States, it is one of a global network of Signals Intelligence (SIGINT) bases, which monitors the world's communications and relays information to NSA HQ at Fort Meade in Maryland, USA. 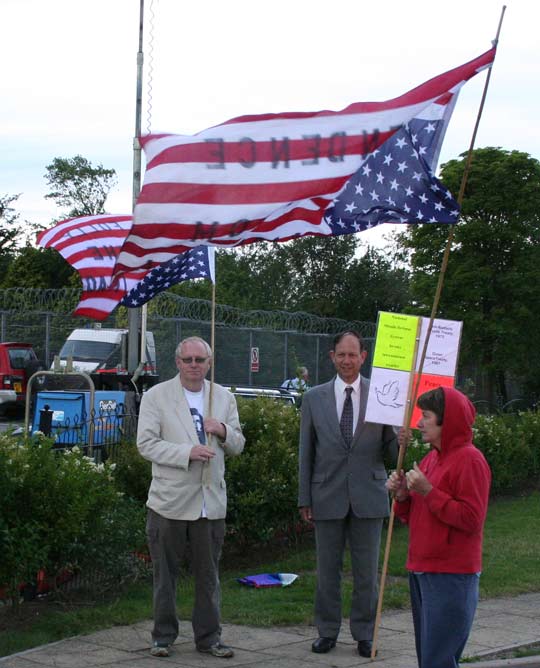 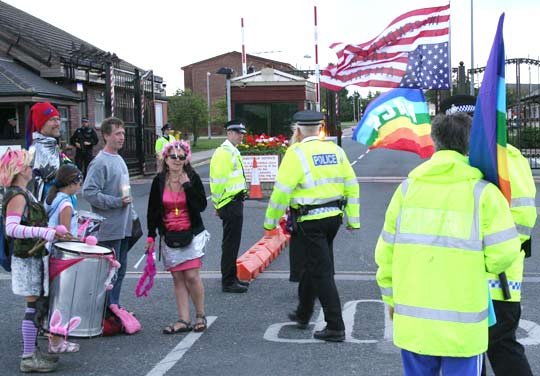 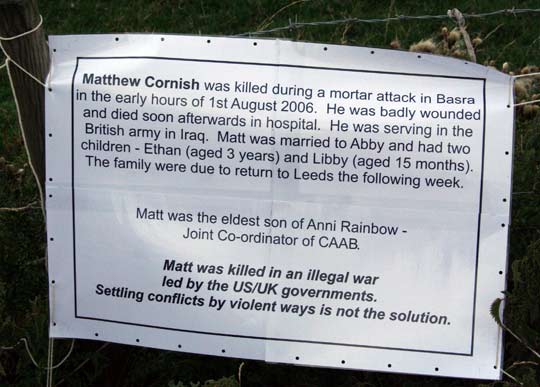 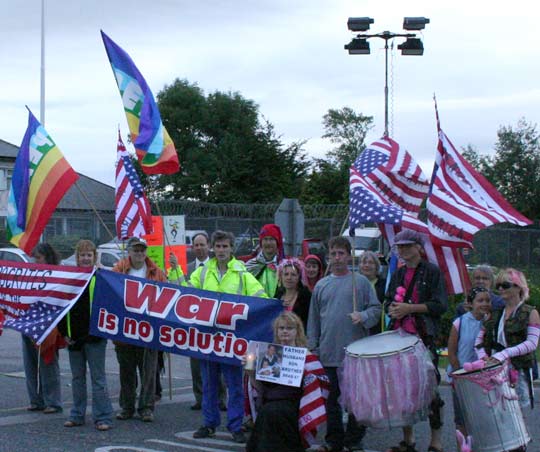 The information processed there is important to the war machine of the US and the countries it sponsors.

As part of maintaining a voice of protest at this foreign invasion of our countryside a vigil is held outside the base between 6 and 8 pm every Tuesday.

This week’s gathering was poignant as it marked one week since the death of Matthew Cornish, killed in Basra on August 1st. Matthew was the eldest son of Anni Rainbow, joint coordinator of the Campaign for the Accountability of American Bases (CAAB). Anni herself was unable to attend but more than seventeen others, including people from Rhythms of Resistance Sheffield, kept sad and angry watch. A time of silence was kept, during which traffic was halted, in commemoration of Matthew.

What about Saddams genocide of the Kurds?

What about Saddams' genocide of the Kurds when hundreds of thousands of Kurds were bombed and gassed to death. Hundreds of thousands more forced to flee their homes. The Kurds as a race would have been wiped out altogether if the anti-war brigade had their way. Saddam Hussein was the worlds worst and most dangerous dictator that is why the Iraq war had to be fought. The world is a lot better off with out him. No Kurds took part in any anti-Iraq war demonstrations.

What about Turkey and Iran?

Turkey, NATO member, supporter of the war against Lebanon (see:

http://www.indymedia.org.uk/en/regions/sheffield/2006/08/347113.html ) and US ally together with Iran have been killing Kurds, see this protest against it in Sheffield earlier in the year:

If you think that the US is going to deliver you a free and independent Kurdistan then take a look at Lebanon and Iraq and Afganistan -- this is what US freedom and democracy looks like.

The enemy of my enemy is NOT NECESSARILLY my friend!

no states - no nations

Kurds DID oppose the Iraq war

How wrong you are, alleged KurdSupporter.

I remember attending a demonstration in Manchester in March 2003, when not only were Kurds present, but one of the speakers was a Kurd. He opposed Saddam, sure, but did not think an aggressive invasion was the way to go.

What Indeed about the Kurdish Genocide

Sorry to say that 'Supporter of the Kurds' has fallen victim to the half truths (lies) told by the US/UK governments.
The worst of the offences against the Kurds were committed well before the current Gulf War (The Halabja poison gas attack for example was in 1988, before even Desert Storm) These attacks were not ended by the current gulf war, they were curtailed when the US government stopped surplying Iraq with weapons (often of 'mass destruction') infact the Halabja attack was used as evidence that Iraq had these 'weapons of mass destructions'. The worst attacks on the Kurds took place when Iraq was the US's proxy ally against Iran and as the US stopped supporting Iraq so the attacks against the Kurds were reduced. Being against the current war in no way implies any support for the Iraqi stance on the Kurds. In fact the anti-war protests are aimed at one of the main supporters of Iraq's aggression against the Kurds!

Kurds in the UK

Rhythms of Resistance Sheffield action samba band includes a person or Iraqi Kurdish origin who is seeking asylum in the UK who is very enthusiastic in participating in actions which oppose US/UK military action.

I am really sorry but I do not want to feel sorry for soldiers. At least soldiers get a choice. They choose to go out and kill or be killed. However, innocent people across the world are paying the price for the warmongers.

Some soldiers have refused to go to war on a point of conscience. I so wish US soldiers in Iraq would do the same - that way you can save the lives of innocent people, stop an illegal invasion, save yourself and your family.

If you do it for money, you are no different to the mercenary Sir Mark Thatcher, knighted by the Queen and those other despicable figures that stand for the values of Blair.

people join the army, navy and airforce through pride in their country and the willingness to protect its ideals and freedom with the greatest gift anyone has been blessed with LIFE.


They DO NOT get to choose what wars they fight to protect this, that is the goverments job.

your right that they defend is to protest the war, mine is to say you are disgracing YOUR troops and the memorys of all thoose that have fallen in the name of the country, union flag and all who it represents