Highlighting the meaning of “Lanterns on the Lake”, Swindon, 9th Aug 2006

Peace campaigners in Swindon were in attendance at the annual “Lanterns on the Lake” event at Coate Water, to highlight the reason for the event – the anniversary of the world’s first, and hopefully last, act of nuclear warfare, in Hiroshima and Nagasaki, and also to publicise the protest at Brize Norton this coming Saturday. Things got a bit heated when an Israeli man and his wife took exception to the leaflets being handed out, but fortunately it ended with handshakes and good wishes. 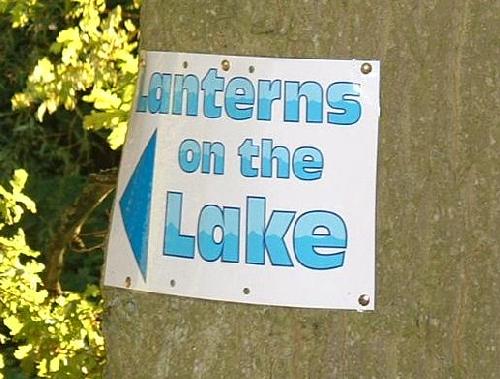 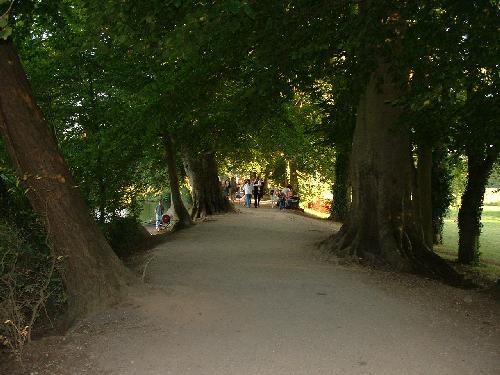 ...down the pleasant tree-lined avenue... 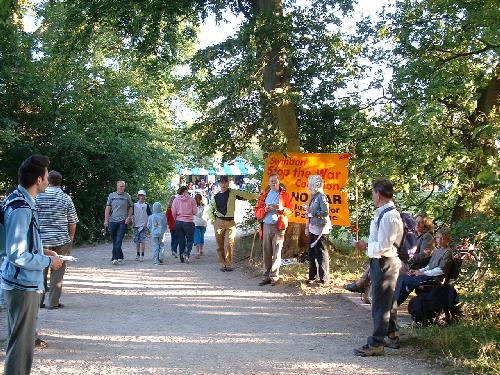 ...to be intercepted by leafleters... 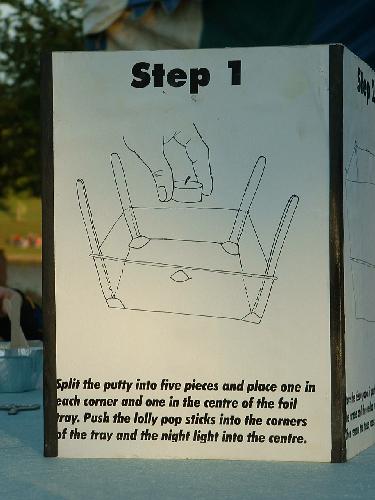 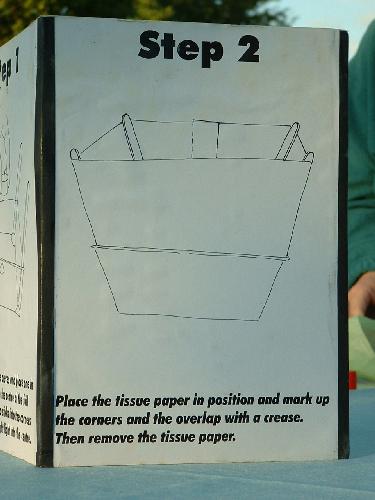 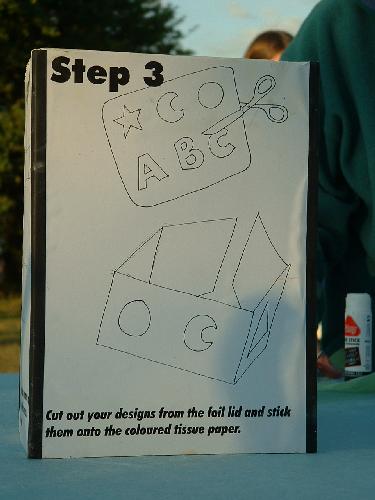 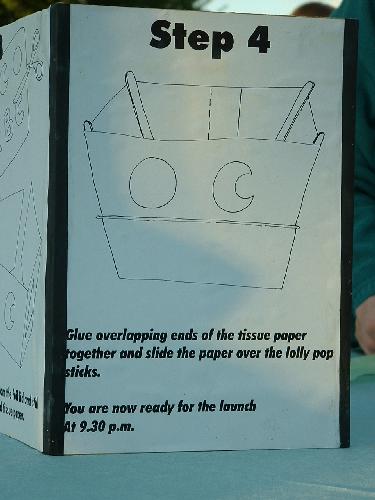 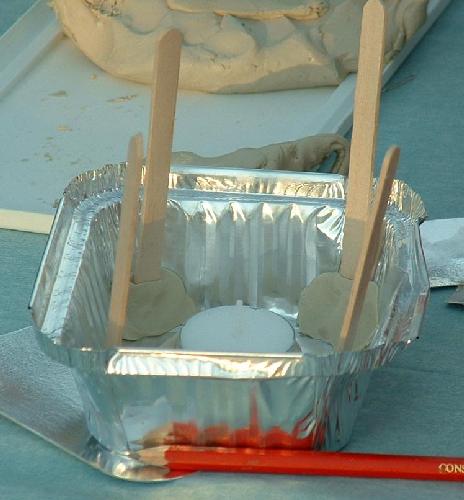 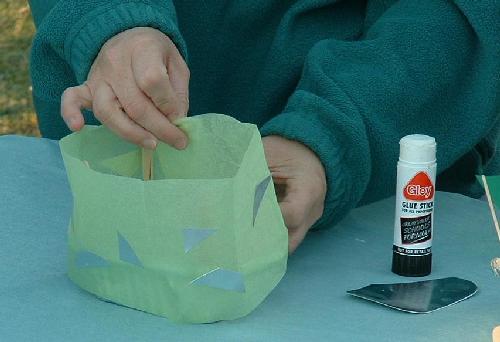 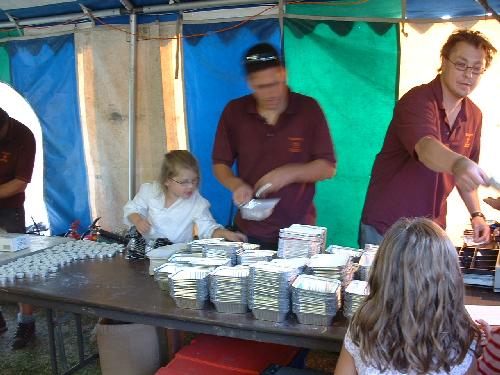 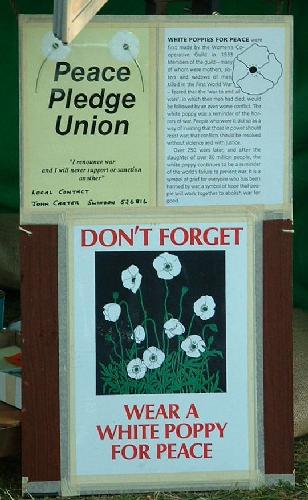 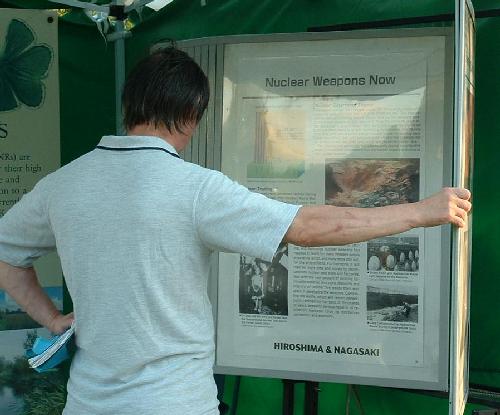 The event was well attended 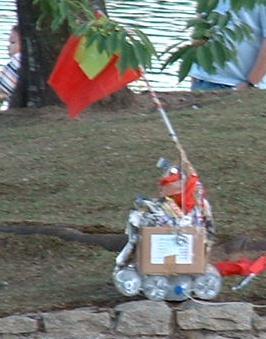 Some people made their own floating lanterns(!) 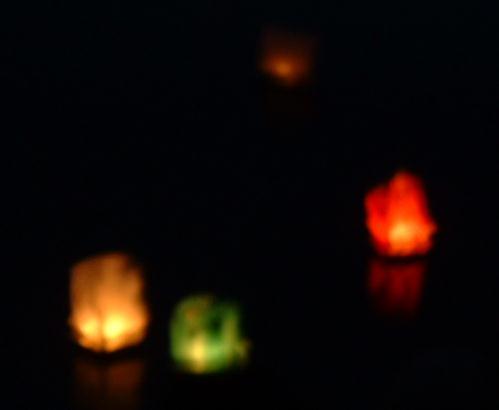 My camera really isn't up to this sort of thing...

...as you can probably tell

Every year in early August, the event known as “Lanterns on the Lake” occurs at Swindon’s favourite place, Coate Water, and is always very well attended. Originally intended to mark the anniversary of the nuclear destruction of the Japanese towns of Hiroshima and Nagasaki during World War 2 [1], in recent years the event seems to have become decoupled from this message, and has become a day when people make lanterns and float them on the lake purely for the sake of making lanterns and floating them on the lake. The only link to the nuclear weapons issue seems to be the dedicated bloke from the Peace Pledge Union with his white poppies for peace and his display about nuclear weapons.

The lantern-making itself follows a tried-and-tested formula. For the sum of £2.50, you can buy a tin-foil takeaway tray (with silvered paper lid), four lolly sticks, a tealight and a length of tissue paper. Taking these items to one of the tables, with scissors, pritt-stick and big lumps of putty provided, you use the putty to secure the tealight in the middle of the tray and the lolly sticks to the four corners so that they stand upright. You cut the lid of the tray into decorative shapes of your choice and stick them to the tissue paper. You wrap the tissue paper around the lolly sticks, and secure the ends together with more pritt-stick, and hey presto, one lantern!

Some more enterprising people had made their own miniature lake-faring vessels with integrated tealights and brought them to the event, but most opted to make their lanterns on the spot to the supplied recipe.

In order to restore the link in people’s minds between the lantern-making exercise and the act of nuclear warfare which must never be repeated, activists from Swindon Stop the War Coalition and CND were strategically placed on the path leading to the event area, handing out leaflets. On one side of the leaflet was a reminder of Hiroshima and Nagasaki, with an argument against developing a replacement for the UK’s ageing Trident submarine-based nuclear weapons system, and a reminder of Tony Blair’s war crime in Iraq. The other side was dedicated to the ongoing massacre in Lebanon, with a callout to join a protest this coming Saturday (12th August) outside the main gates of Brize Norton air base in Oxfordshire, which is believed to be one of the bases used for refuelling planes delivering munitions from the US to Israel [2].

The peace campaigners were mostly well-received, with leaflets being accepted by a much higher proportion of people than is usually experienced during the average town-centre leaflet distribution exercise. One man in military-style camouflage trousers, wearing two wristbands with the words “gulf war veterans” stopped to talk for a few minutes, and quite surprised me by saying that he thought our military shouldn’t be in Iraq or Afghanistan, and that the US were only interested in Iraq for its oil, and that the UK forces were doing the US’s dirty work in Afghanistan.

As the sun was setting and people were starting to light their lanterns and set them afloat on the lake, two passers-by became the first people I have seen in person to defend Israel’s behaviour in the current bombardment and invasion of Lebanon (in contrast to the run-up to the invasion of Iraq in 2003, when members of the public would frequently argue with peace campaigners’ objections to the idea of making war on Iraq). A man who claimed to be from Israel, but with Moroccan Arab parents, and his English wife, were fiercely supportive of Israel in all respects, and took the time out of their evening to argue heatedly with the peace campaigners. With each of them carrying on separate arguments with whichever of the peace campaigners who stepped forward to engage with them, I found myself trying to follow two separate debates, one in each ear, and as a result failed to follow either of them with any success, and thus I will not even attempt to report them in detail here. The arguments ranged widely, and included whether it was the Israelis or the Arabs wot started it (this one jumped backwards and forwards through history so quickly that I didn’t stand a chance even if I wasn’t trying to listen to another argument at the same time), whether or not Israel is a racist state, whether Hizbullah is an outpost of Iran and Syria or a genuine political organisation, and likewise whether Israel is an outpost of the US or a genuine nation.

Somehow, these arguments were concluded with an agreement that what we all wanted was peace for everyone, and with much shaking of hands. This was quickly followed by the Israeli man coming back to the peace campaigners to ask if he could borrow a lighter to light the lantern he’d made, a request which was quickly fulfilled. Sometimes I live in despair that Homo Sapiens will never learn to live peacefully with his or her fellow Homo Sapiens, but this incident gives me a small glimmer of hope.


Why lanterns on the lake?

Nuclear weapons indiscriminately kill everyone, soldiers and civilians, children, women and men, the elderly and infirm. They are not a weapon of war, but a way of committing genocide.

The lanterns on the late tonight are as a gesture of remembrance to the hundreds of thousands who died at Nagasaki and Hiroshima, and to commemorate all victims of war.

Around a hundred Iraqis per day are dying violent deaths under American occupation. Most of the time there is no electricity, and there is often no water. The health service has collapsed. The Iraqi people clearly do not want the British and American troops there. There are daily military arracks on the occupation forces, and 110 British soldiers have lost their lives.

We were told that Saddam Hussein had weapons of mass destruction. That was a lie.

We were told that Iraqis would welcome British soldiers as liberators. That was a lie.

Israel has killed more than 1,000 Lebanese, more than half of them children.

They have destroyed the country’s economy, blowing up bridges, Beirut airport, power stations, even attacking a convoy of ambulances, and unarmed United Nations observers. But their main target have been civilian residential areas.

This is active military support for the Israeli army by Tony Blair. Instead of working for a ceasefire, the Labour government is giving active aid to Israel.