Sick of constant wars being fought over greed, racism and control for the world's dwindling natural resources? Disgusted that the government in this country sits back while a murderous, oppressive state brutally attacks another country, just because the UK government wants to keep its ally in an area it's helping rip apart to guarantee the supply of the last few drops of oil? 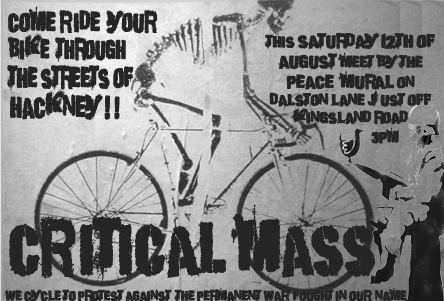 Sickened that the people creating the demand for the natural resources being fought for, are either unaware of the destruction they are causing, or don't care as long as they have their nice comfy life????

It's through the frustration of this that we want to WAKE people up and remind them of the damage being caused in other parts of the world, so we can keep the lifestyle most of us have in this country; a lifestyle of high consuming and seemingly little consequence.

So... this Saturday 12th August we will have a critical mass through Hackney, with a bicycle sound system playing the sounds of war, to ring clear a message of what is currently happening in other parts of the world, such as Lebanon, with our complicity.

Come join us with ye bike at the Peace Mural on Dalston Lane, just off Kingsland Road @ 3pm