"In passing the most deplorable Migration Amendment Bill through the House of Representatives at 11am this morning, The Howard government has added another dark victory to its deplorable tally of "achievements" since the Tampa legislation set Australia on course for serious human rights breaches and the undermining of International Conventions," WA Rights group Project SafeCom said this morning. 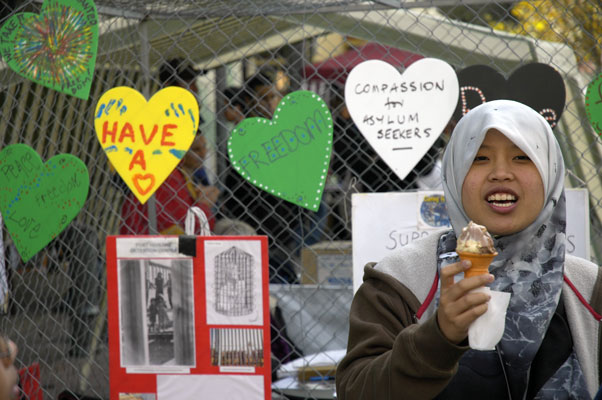 AUSTRALIA: "In presenting the current Bill, the government has made it appear as if this policy restores the notion of equity between those who make landfall on the mainland and those who only make it to any of the 4600 excised islands, and this is a blatant example of its spin, smoke and mirrors; because the only just reference to the notion of equity is the fact that the Bill creates indeed an equally unjust treatment - you'll get deported to Nauru - to both groups."

The Howard government's manipulation of the rightful status also of 'unannounced' refugees arriving by boat to Australian shores is one thing; the drafting of this Bill which places refugees on a birdpoo island that knows no fresh water or food, outside the scrutiny of Australian legal reviews and justice of our laws, as so clearly spelled out by the Hon Judi Moylan in her speech on the Second Reading yesterday, makes John Howard personally responsible for undermining the notion of Australia as a just country open to a "fair go for all", spokesman Jack H Smit said.

"Project SafeCom honours and congratulates the coalition members who crossed the floor, Mr Petro Georgiou, Hon Judi Moylan and Mr Russell Broadbent. As they confidently and succinctly showed in their speeches, their choice on this issue was not an anti-coalition rebellion, but a choice for open and accountable government also of people fleeing their countries and asking for justice from Australia under the UN Convention."

"This Bill destroys any notion of justice for those seeking protection from persecution. We pray and hope that Senators next week will realise, that nobody will ever be able to guarantee safety for men, women and children from mental damage as a result of what remains unlawful imprisonment, or any other abuse that may befall them while on Nauru in Australian detention."