Around two dozen peace activists from all over Oxfordshire, held a dignified protest outside the main gates of RAF Brize Norton on Wednesday 9 August. This was the first of two protests to be held at the base against its use by U.S. planes transporting armaments to Israel. The local group was joined by well-known peace campaigners Kate Hudson of CND and Pat Arrowsmith.We were all videoed to bits, to the disgust of some.The second protest will be held on Saturday 12 July, from 12.00. I have more, but similar, pics if required. 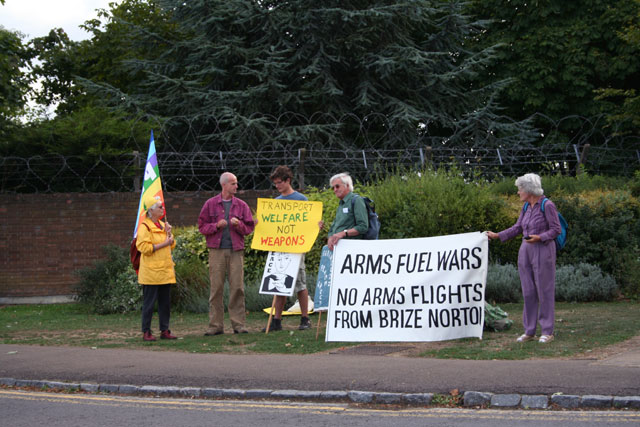 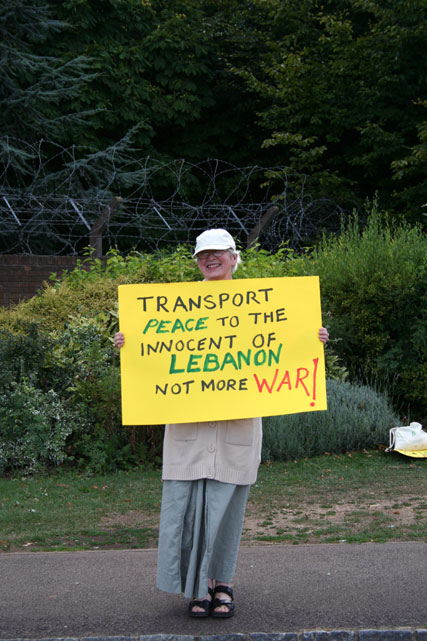 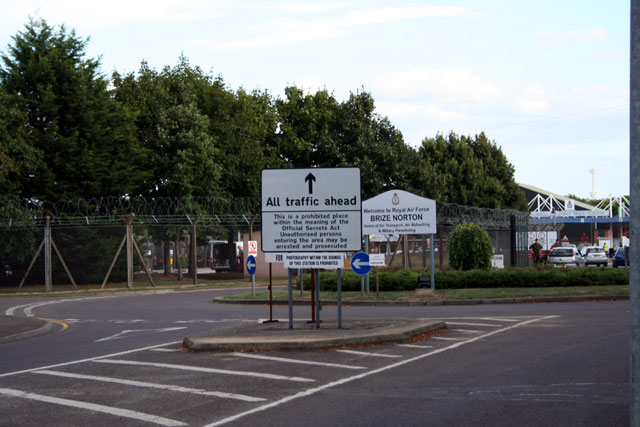 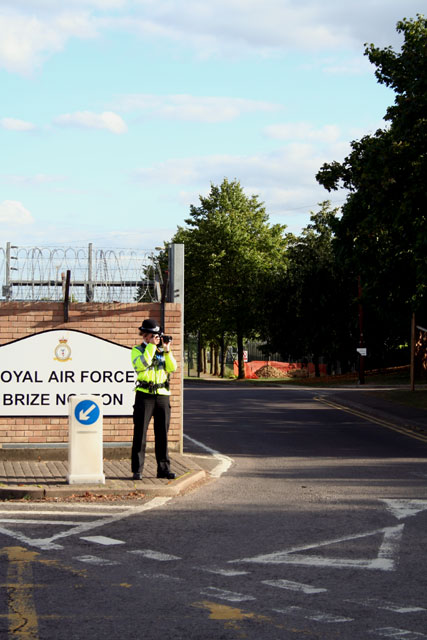 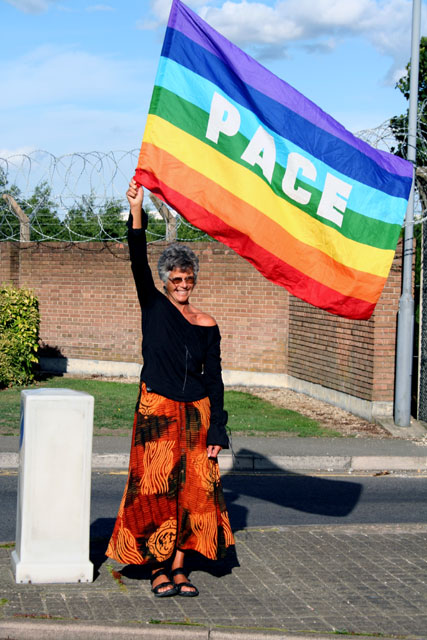 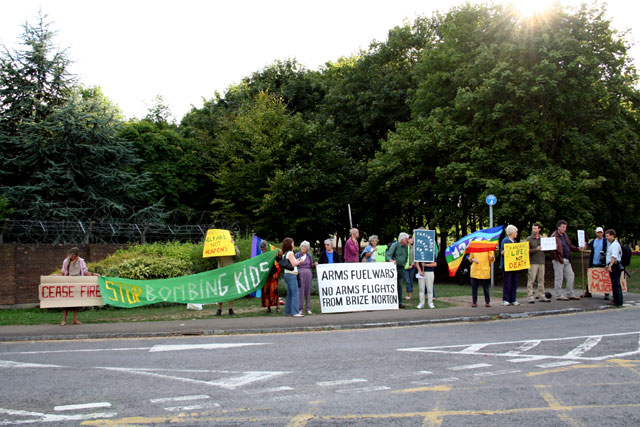 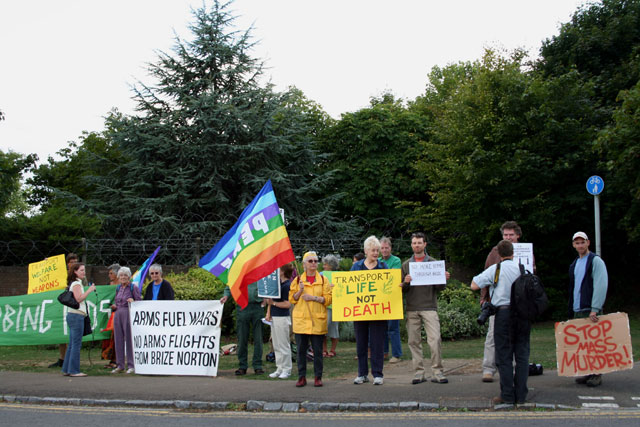 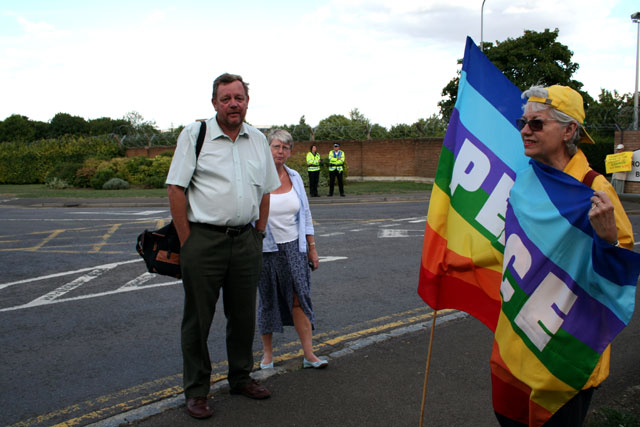 Mr and Mrs Readshaw with Peacenik 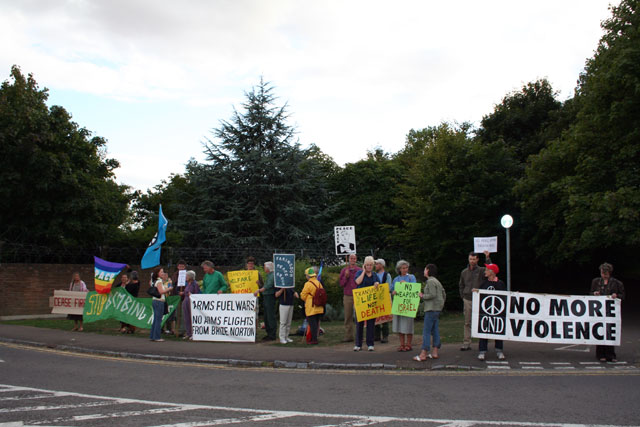 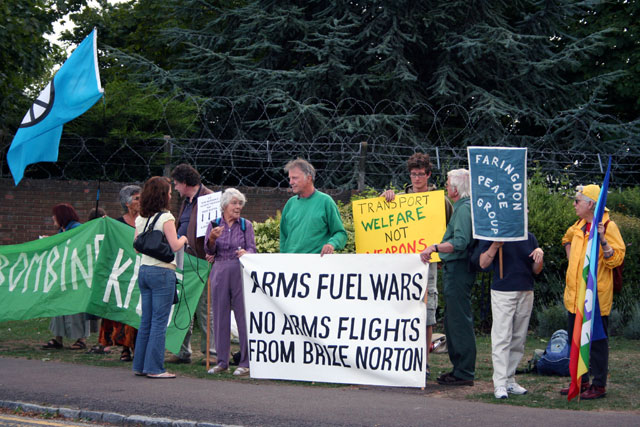 A small but highly effective Peace Vigil was held last night outside the main gates of RAF Brize Norton in West Oxfordshire. The colourful banners and placards proclaimed to passing commuters that this British air base is being used to refuel American transport aircraft taking weapons to Israel.

Thanks to peace activists at Prestwick the Americans no longer have the convenient option of refueling these weapons flights at civilian airports. Wednesday's peaceful protest at the base underlined the role of the British government in the Middle East conflict. Tony Blair is now giving active military support to Israel in their war against Lebanon by allowing these flights to refuel at RAF Brize Norton.

The many passing motorists who beeped and waved in support of the Peace campaigners were a welcome indication of the lack of support for this policy.

A further demonstration organised by Swindon Stop The War Coalition and CND will be held at RAF Brize Norton, Carterton, West Oxfordshire at 12 noon on Saturday 12 August.

In what way was this action "highly effective"? Nice to see people turn out for a day in the sun, but did you really achieve anything?

And so I am smitten by rare damsel.

Surely a rare occurrence on these sites!

I could not put it more poignantly!

Maybe it means that it was highly effective as a vigil, because it was next to a busy road?

Fraud at the last protest

http://www.indymedia.org.uk/images/2006/08/347542.jpg is the base photographer (male) and base press officier (Kate) and they are not married. I work on the base for the RAF and dont agree with misinforming people.

effective - but for what end?

The philosopher D Z Phillips - answering the point that praying is an irrational activity because there is no evidence for its effectiveness in bringing about that which is prayed for – argued that this was to misunderstand the real meaning of the ritual of praying: That what is was really about was asserting that there was a moral order to the universe; that there was something, both all powerful and a person, which cared for the person praying; that one was not alone.

Perhaps we could say the same about anti-nuclear and anti-war demonstrations. It is now nearly fifty years since the beginning of the nuclear pacifist movement and it has had no effect on the nuclear policies of nation-states. Whenever this point is made, we hear evasive answers of the kind that ‘oh, but the abolition of slavery took a long time’. That no better answer is given surely suggests that the real purpose of anti-nuke demos is not at all to affect the actions of the State. If someone goes on looking for something in the same place when it’s clear that the object is not there, then we don’t have to be a Freudian to suspect that this is some kind of displacement-activity. So if folks go on doing something which is said to be for some aim, but that aim is never got near, then surely summat else is going on.

A demonstration is a showing of concern; it is about promoting the illusion that we already live in a world where popular action is effective; it is about the fundamental benignity of the capitalist State. To see what I meant by the last: compare the actions of anti-nuclear activists with those of the Animal Righters. The latter have used physical terror against scientists and others involved in animal experiments. The harm done by experimentation on animals is insignificant compared to that which would result from the use of nukes (unless you are one of those imbeciles who value animals over humans !); yet there has been no proportionate use of terrorist methods to further nuclear pacifism. Such would involve quite unprecedented violence against the families of scientists and others involved in nuclear weapons. This has not happened because:
1) Anti-nuke activists have not the stomach for it (it would involve terror which would be literally stomach-churning).
2) It is hard to imagine that there would be enough prepared to risk death or life imprisonment to make it effective
3) It would lead to unprecedented reprisals as the Warfare State protected itself.
4) It would anger the mass of the population who tend to identify their own interests with that of their national Warfare States.
5) The only possible road to abolition of nukes is through a massive political transformation: the whole tradition of nuclear pacifism comes from bourgeois reformism. It is a displacement of politics onto moralism.

But given the nature of the Warfare State it is absurd to imagine that its policies will be changed by a group of good folk singing songs, waving placards and occasionally trashing a war-plane. Remember that demo against the imperialist attack on Iraq back in February ’03? Its effect? Fuck-all.

So, on this view, demonstrations actually are effective in what they are really about: rituals of the culture of the alternistas, affirmations of the caring nature of the demonstrators and the basic goodness of the world that they are in. To return to the comparison with the abolition of slavery. There were lots of good folk in the USA in the decades preceding the Civil War who agitated for the abolition of slavery. But it was the terrorism of John Brown which was effective in realising that aim.