The border with Syria is total chaos. Going into Lebanon is easy, coming out hundreds of cars and lorries are stacked up in a never-ending queue. Some are HGVs desperate to get their goods and vehicles out of the war zone. Others are packed with refugees; the lucky ones with the right documentation and enough money to escape. 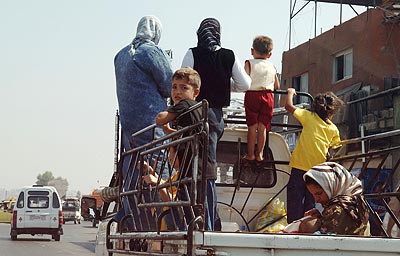 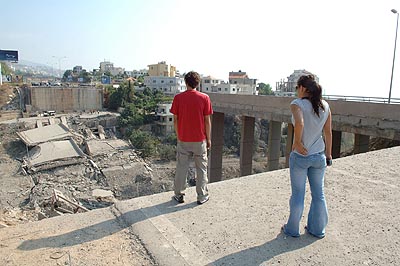 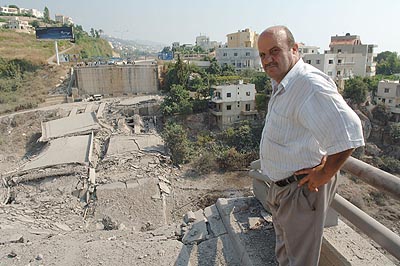 The road into Beirut is deserted. We have already been forced to take this route via the north because the main road from Damascus has been bombed. Now we hear that 3 bridges have been flattened this morning by Israeli strikes cutting the capital city from the north. Many people are scared to drive anywhere following the attack on two ambulances a few days ago. There is also a chronic fuel shortage as petrol stations have been attacked and the ones we pass on the road are nearly all closed. We take the one remaining road along the coast. All along the seafront, half-finished hotels and holiday apartments line the road. Our driver tells us that usually this area is teaming with activity as construction workers were trying to meet the demand of Lebanon’s growing tourist industry. Now the building sites are as deserted as the roads.

Before reaching the city we pass the Halat bridge. One of the routes destroyed this morning. The remains of the motorway bridge lie in the gorge below along with at least one civilian vehicle. There is a simple cordon of used car tires to divert motorists around it. No Police or army are present, we have not seen any staffing the checkpoints on the way here either. They clearly have more important priorities elsewhere. Israel has claimed that these strikes were necessary to stop weapons coming in from Syria. This is of course ludicrous. Hizbollah are easily resourceful enough to avoid the main routes and probably have had their artillery placed in and around the battle theatre for some time. This is about smashing the infrastructure of the country, creating mass unemployment and choking the supply line to the hundreds of thousands of refugees from the south who are massing here.

Beirut itself seems equally deserted. People are staying indoors and the few cars on the empty roads are just ignoring the traffic lights, which for the time being are still working.

Words and pictures copyright the author but free to progressive media, NGOs etc. Contact by email for details.