I’m at the Government University to talk to Bilal Masri, the assistant general director of the Government University Hospital. The Government has announced that the hospitals are in danger of running out of fuel for their generators. ‘So far we are doing OK. We think we have fuel for the generators for another week to ten days running at our present capacity. This is about 25% of what is usual. We are saving electricity wherever possible. We keep essential operations like ER and ICU running. Everywhere else electricity is a commodity. If the situation continues to escalate and the Israelis stop the fuel ship from docking in the port, then we could see an energy crisis in the whole country - not just the hospital.’ 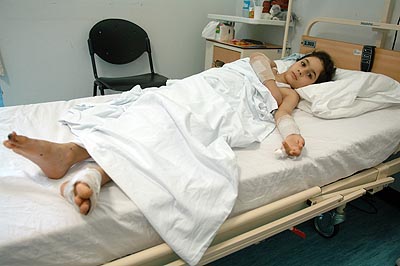 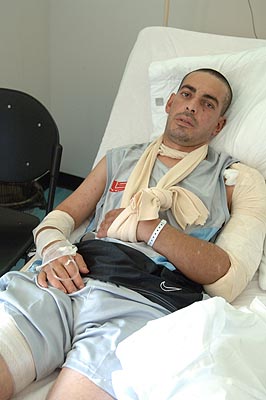 What about supplies getting to the rest of the hospital?

'At present supplies are still getting in from flights into the one remaining runway at the airport from countries like United Arab Emirates, Saudi Arabia and France. We do however have a problem with dialysis patients. Most of the supplies needed for them are based in warehouses in the north of the country and the bridges have been bombed.'

Before leaving, I am introduced to two of the patients.

Nine year-old Samah Shehab is unbelievably lucky (or unlucky depending on your point of view). She was playing near her house in a village in south Lebanon. An Israeli shell (the first of a sustained bombardment) landed just five feet from where she was standing. Every piece of shrapnel and casing managed to miss her so she suffered just burns on her arms, legs and body. Her doctor says she will be able to leave in about a month but her problems are far from over. Her hospital bed is desperately needed but she must go somewhere clean and sterile if her burns are not going to be infected. Her village is occupied and the refugee centres are anything but clean.

I am also introduced to Ahmad Saad, who is suffering from shrapnel and burns. He is part of Lebanon’s civil defence force. When the south Lebanese town where he was based was bombed, he went without hesitation into a burning building to try and rescue a trapped family. The building then took another direct hit and it was Ahmad who was dragged from the rubble by his colleagues barely alive. The family all died. ‘He is a hero’ I comment to my guide. ‘He is one of thousands of heroes across the country’ he replies.