Thousands rally for peace in Lebanon

"All those hypocrites who don't call for a cease-fire are accomplices. 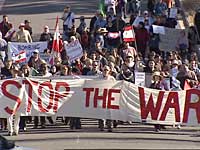 No excuse for its aggression!

AUSTRALIA: Thousands of protesters have gathered in Sydney and Canberra today to demonstrate against the conflict between Israel and Hezbollah in Lebanon.

In Sydney, people from Australia's Lebanese and Muslim communities gathered at Town Hall before marching through the city streets to Hyde Park.

Keysar Trad, from the Islamic Friendship Association, says despite the passing of a UN resolution on the conflict, Israel must immediately withdraw its troops from southern Lebanon.

"It's not enough to call for a cease-fire," he said.

"All those hypocrites who don't call for a cease-fire are accomplices.

"Every nation who has not called for a cease-fire is an accomplice to the Israeli aggression.

Mr Trad also says Israel should pay compensation to Lebanon for damage to its infrastructure and towns which is estimated at around $6 billion.

"We must also call for reparations," he said.

"Israel must pay for every bit of destruction it has caused on Lebanon."

The Canberra rally, which has attracted about 200 people, has been organised by the Campaign Against Israeli Agression.

Diana Abdul Rahman, of the Canberra Islamic Centre, told the crowd that Israel had no excuse for its aggression.

"It cannot hide behind the pretext that it is a poor and innocent country surrounded by countries that want to get rid of it," she said.

"We say to Israel, wake up and join the rest of the world and make genuine peace with your neighbours and then you will find everyone will leave you as you are."

Prior to the UN resolution, Israel had said its offensive in Lebanon would end when Hezbollah was destroyed and its security restored.