Today an Israeli activist got shot in the head by a rubber bullet during a non-violent protest against the Palestinian Occupation. He will suffer serious lasting brain injury from his wounds. At this moment he's in an hospital in Tel Aviv for brainsurgery. Here follows a report on the demonstration. 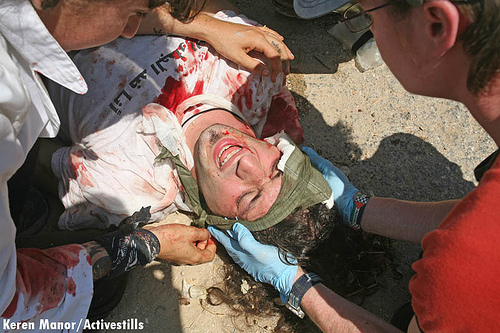 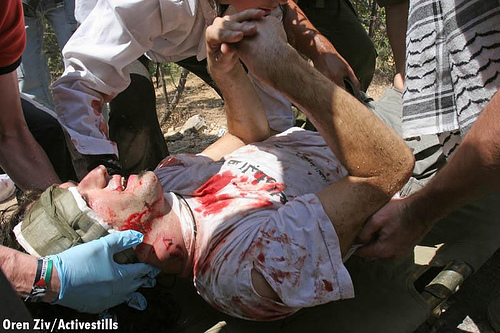 The demonstrators resisted to be pushed back and confronted the Israeli forces. They prevented the advance of the armored car. But most of the demonstrators were pushed back into the village with overwhelming police violence. Then one of the demonstrators was seriously injured by a rubber coated bullet shot by a border policeman (one shot at his head and one at his neck). The police refused to let acknowledge the grieve injury and only after a big hassle let through an ambulance.

The demonstration of today was bigger then the usual demonstrations in Bil'in, that take place weekly. In addition to the usual Palestinian and Israeli activists there were about a 100 internationals: ISM people and the participants of the Queeruption Tel-Aviv 2006. At noon the march towards the separation fence started. The march theme was against the war in Lebanon. Lebanese flags were carried. Also was carried a big banner in Hebrew that called for the soldiers to refuse service and thus refusing to become war criminals.

here you can find a short video explaining what happened:

and a newspaper article in englsih: