A protest called at very short notice outside the main gates of RAF Brize Norton had the unexpected effect of closing the main gates, and possibly the entire base, to all traffic for nearly two hours. Brize Norton is one of the RAF bases reportedly being used to refuel planes delivering bombs from the US to Israel for use in the ongoing massacre of Lebanon. Meanwhile a peace camp is being established nearby to watch for further such flights. Some photos of the day are attached, and with a bit of luck a movie of the more exciting bits should materialise here later. 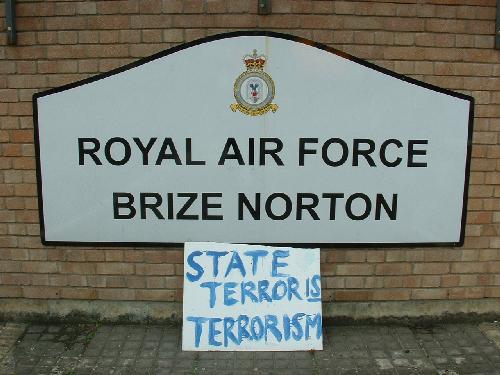 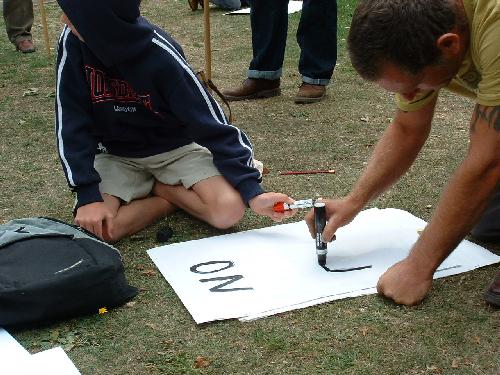 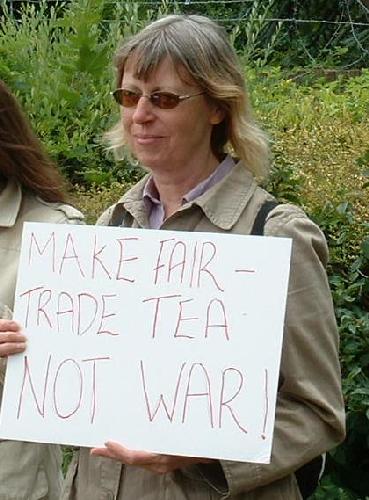 Israel out of Lebanon banner 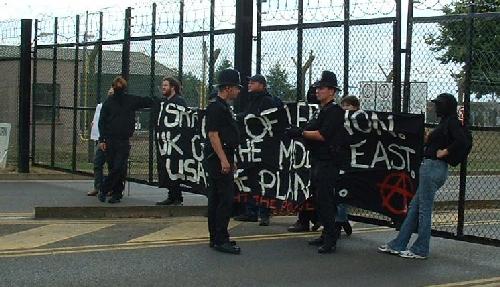 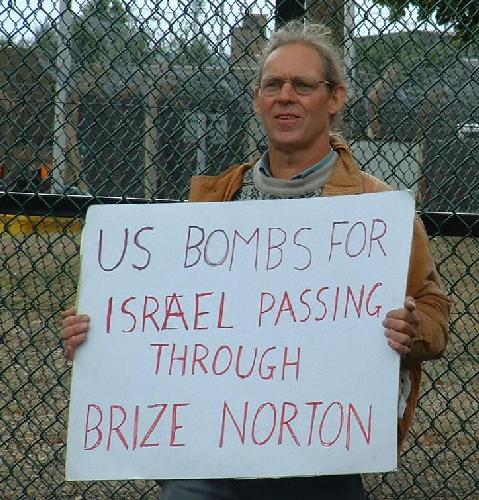 US bombs for Israel passing through Brize Norton

Some people outside the gate, some inside 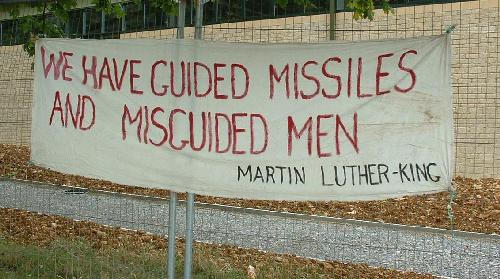 We have guided missiles and misguided men - Martin Luther King 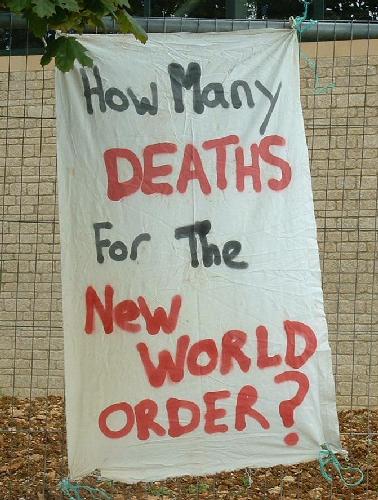 How many deaths for the new world order? 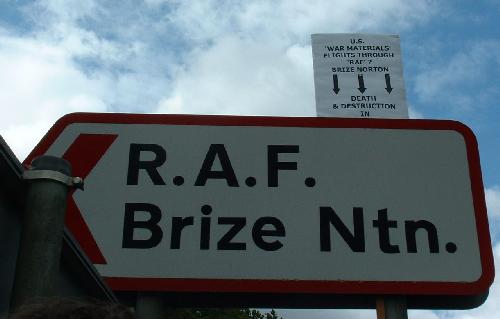 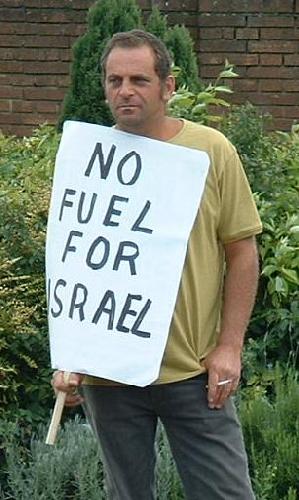 No fuel for Israel

Police assist with the blockade 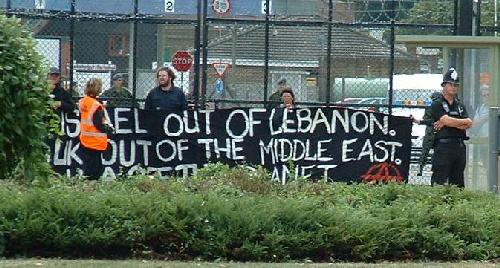 Samba outside the outer gate 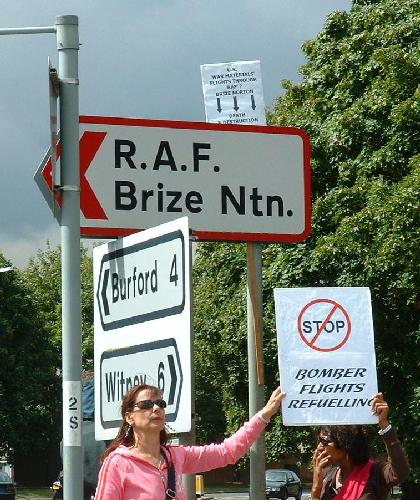 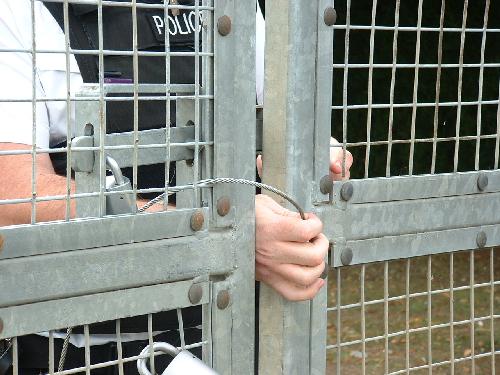 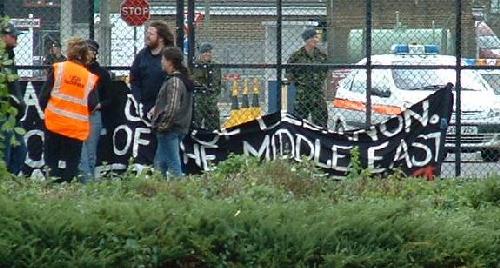 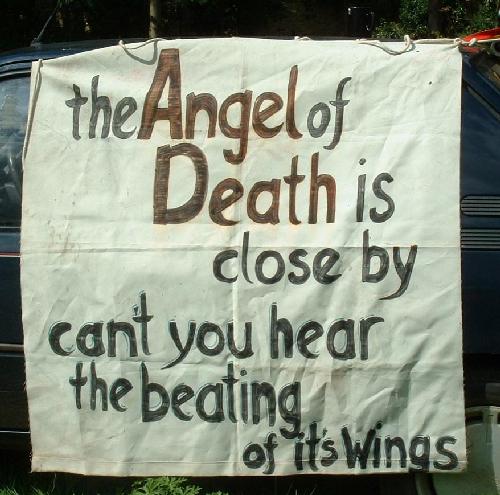 The angel of death is close by - can't you hear the beating of its wings?

Following on from last weekend’s huge (but state sanctioned) march and rally in London [1], Swindon Stop the War called a protest outside the main gates of RAF Brize Norton in Oxfordshire. Around fifty-five people attended, including a samba band which had come all the way from London, and a reporter and cameraman from ITV Central news.

Although the original intention was to make our presence felt outside the gates of the base, to highlight the role it plays in the wider “war on terror”, and specifically in the bombardment of Lebanon, a group of anarchists, believed to be from Cardiff, arrived and unfurled a huge banner with the words “Israel out of Lebanon, UK out of the Middle East, USA off the planet”. With hardly a word, they proceeded to march in through the outer gates of the base.

There are two sets of gates at this entrance to Brize Norton. The outer set of gates stood wide open, and the police were keeping a low profile, so there was nothing to stop anyone walking in other than the no-entry signs. Inside these gates is a big roundabout, and on the other side of the roundabout is another set of gates leading presumably into the base proper. Although there were a handful of police in the area between the two sets of gates, they made no attempt to stop these people approaching the inner gates. Instead they closed the inner gates, and the anarchists took up position directly in front of it, with their banner held up for all to see (although it wasn’t really visible from the road). Before most of us understood quite what was happening, the main gate of the air base through which all UK solders leave and enter the country, had been effectively and peacefully blockaded, and all incoming traffic was being sent back round the roundabout to the main road.

Emboldened by this act, more of the protestors drifted into the area between the two sets of gates. Some more police arrived, a few vague warnings were issued to the effect that people might be arrested if they didn’t leave the area, and officer 774 arrived to start the oft-seen intimidation tactic of filming and photographing everyone. Other than officer 774’s activities, the police were still making no real effort to move people out of the area. When a couple of elderly ladies objected to being filmed and demanded to know what the purpose was, she mumbled something about “evidence”, and then disappeared through the inner gates before anyone could make a note of her number. She was back again soon enough though, systematically filming and photographing everyone several times over.

The blockaders with their banner and a legal observer maintained their positions, but most of the protestors drifted back outside the outer gates, wanting to make a public display of their disapproval of the way the US Air Force is once again using our island as some kind of unsinkable aircraft carrier. Surprisingly for a town which is so dependent on the air base for employment and the like, the reception from passing cars was largely positive, with many hoots of support, but also a few inevitable shouts of “get a job” (I already have a full-time job, by the way) and other abuse.

Andy Newman of Swindon Stop the War concisely summed up the reason we had chosen to protest at Brize Norton.

As the protest outside the outer gates continued, with an open mike, poetry and samba, the police lent their assistance to the blockade, closing one of the outer gates and blocking the other one with a van and a line of yellow-jacketed officers, and even supplied another officer to explain to any incoming traffic that they couldn’t come in. Meanwhile the original blockade of the inner gates stood firm, with some of those outside regularly peering in to see if anything was happening to them.

Meanwhile, other reports and comments posted to the Indymedia newswire indicate that other gates to Brize Norton were also blockaded one way or another, and even that the entire base was effectively closed for business for the duration [2] [3].

Approximately an hour and a half after marching in through the outer gate, the blockaders decided to march back out again, still holding their banner proudly aloft, to cheers from those outside, and passed through the outer gates again unmolested by the police. They then turned right onto Brize Norton Road, and walked away from Carterton, destination unknown, but spread right across the road with their banner.

In a display of what would in any normal situation be described as dangerous driving, a car came up rather fast behind the marchers, before screeching to a halt a couple of feet away from them. Apparently the police up till this point hadn’t noticed that the main road was being blocked, but at the sound of sharp braking they suddenly started running towards the marchers and bundled them rather roughly first to the left-hand side of the road and then onto the pavement on the right hand side of the road.

Eyewitnesses who were closer to the action than me report that officer 774 (she of the systematic and intimidatory photography technique) was at the head of the chase, urging the other officers on, and that no warning was given before they piled into the marchers. Seeing as the policing up to this point had been low-key and unobtrusive (with the exception of officer 774’s activities), this incident was shockingly mismanaged. Surely, on a road with only one lane in each direction, it would have been possible for the police to temporarily stop the traffic in both directions (in the interest of public safety) and warn the marchers to get off the road or face arrest, BEFORE initiating a physical confrontation, and the road could be cleared again within minutes.

In the ensuing scuffles, the dangerous driver escaped without being stopped or identified, four marchers were arrested (including one for allegedly assaulting a police officer), and it was very difficult to see what was happening because the other police insisted on telling everyone to a) move away from the arresting officers, and b) stay on the pavement, where we couldn’t see anything though the line of police telling us to stay away from the arresting officers. Although I wasn’t in a very good position to observe the whole incident, it seems that it was quite well covered by a number of cameras (still and video), including the Central TV cameraman, so there should be very little chance of any trumped-up charges being brought.

Although the Central TV journalist told me that their report would be broadcast on the 5:30 news on both Central and south-west ITV news, it seems that the editors in the south-west region had other ideas, preferring to report that cancelled flights meant that lots of people were stuck in airports, with dubious graphics of airports with some kind of gun-sights superimposed over them.

As the protestors dispersed at around 2pm, Andy reminded us all of the over-policed peace camp, march and rally which had been held in the same place in April 2005 [4], and that there would be a national demonstration at Brize Norton on the 2nd December. Fed up with the routine of A to B marches followed by the great and the good preaching to the converted? Come to Brize Norton for a fun and unpredictable day out! 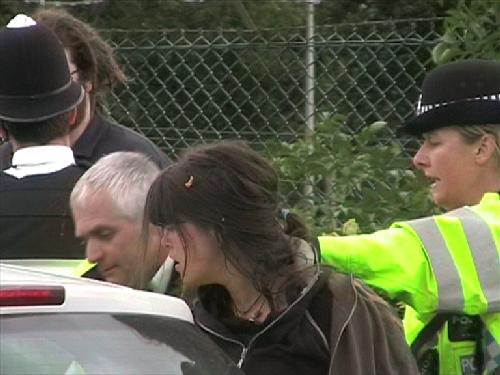 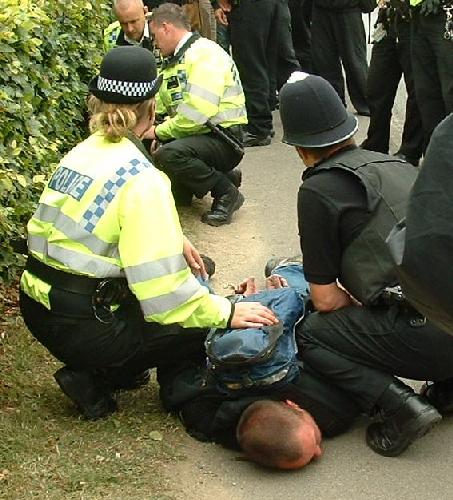 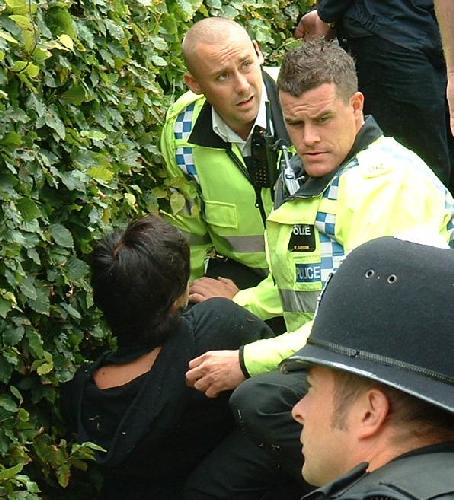 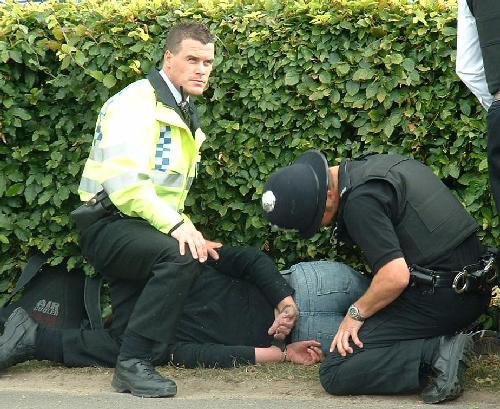 Arrest (I think this was #3 again) 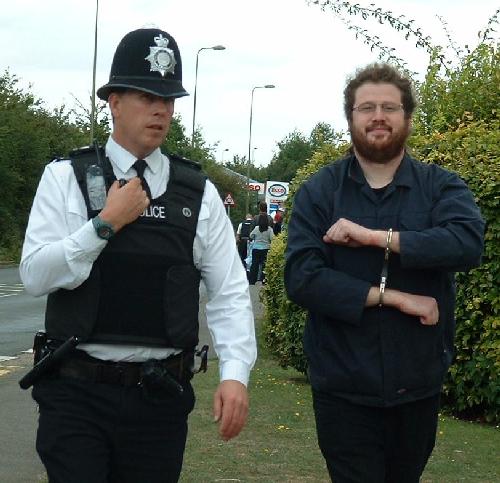 Arrest #4 coming quietly (he got a cheer)

As previously mentioned, I wasn't in a good position to observe the arrests, but here are a few photos anyway.

Officer 774, she of the systematic and intimidatory photography technique 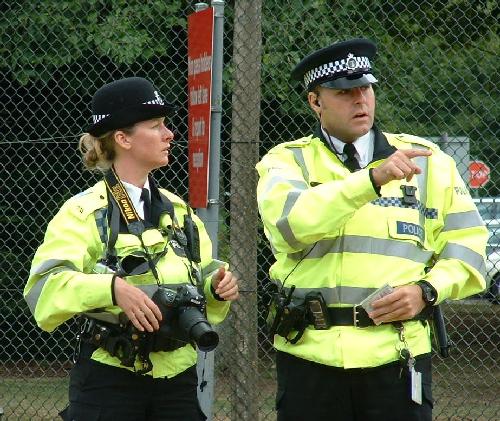 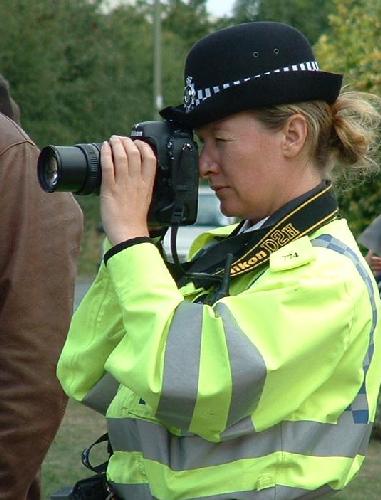 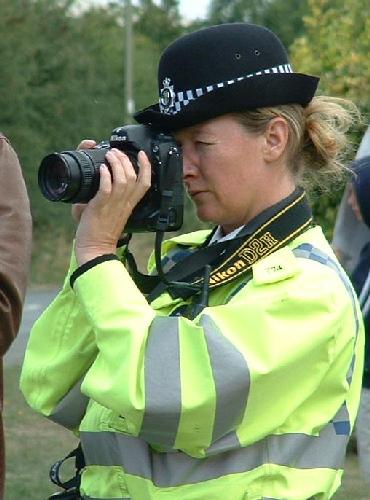 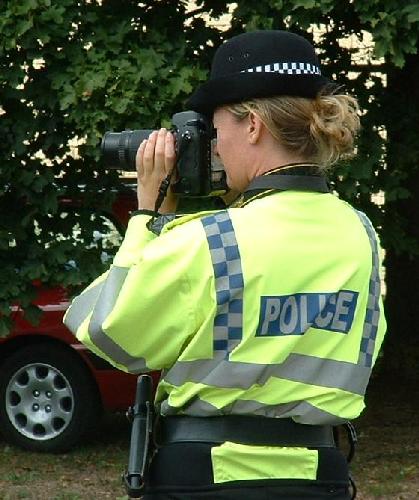 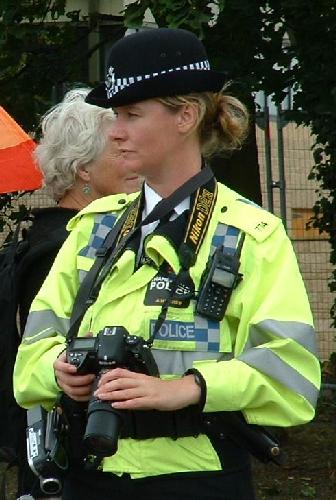 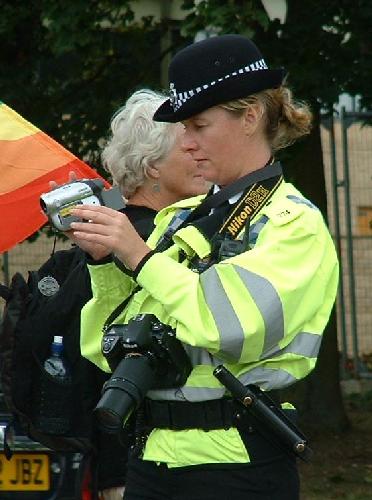 Maybe this is slightly gratuitous, but even the most law-abiding of citizens with nothing to hide gets a bit narked at being repeatedly filmed and photographed by the police under the pretext of "evidence". So here's some more "evidence", for what it's worth.

3 of the activists arrested today at Brize Norton have just been released (00:20) from custody at Banbury police station, all have been given cautions.

They are still awaitng the release of a fourth activist who was arrested for alleged assault of a police officer.

They are now having a beer.

Heaven is a half brick

All are now released

fourth person has been charged with assault police....but now in bed :-) 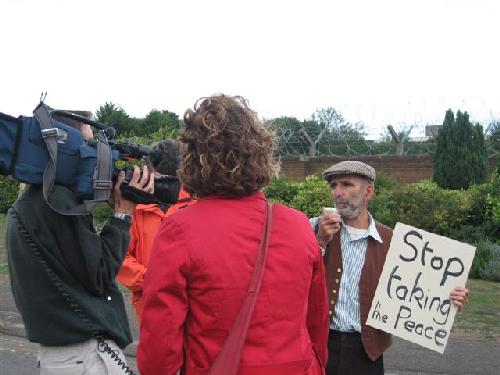 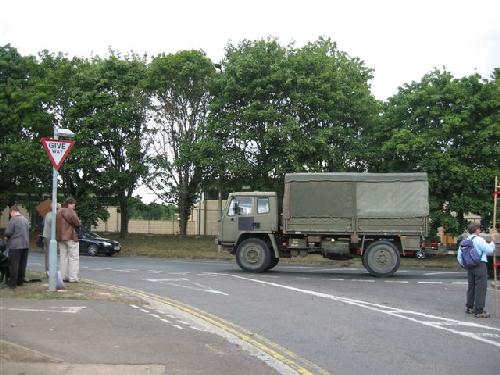 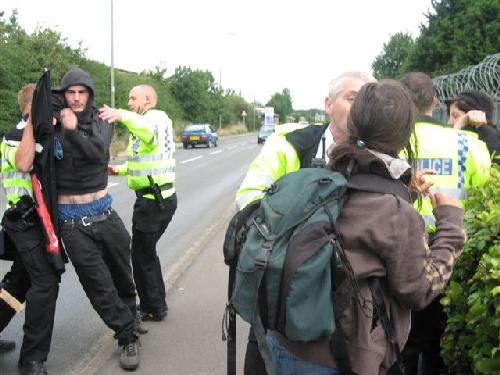 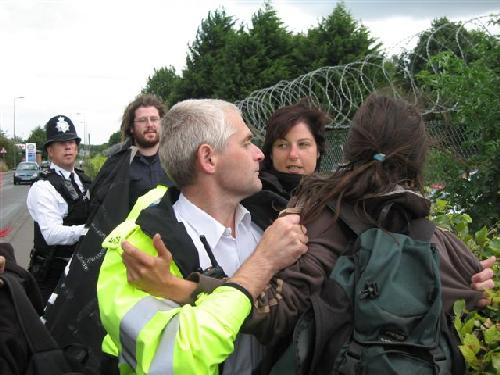 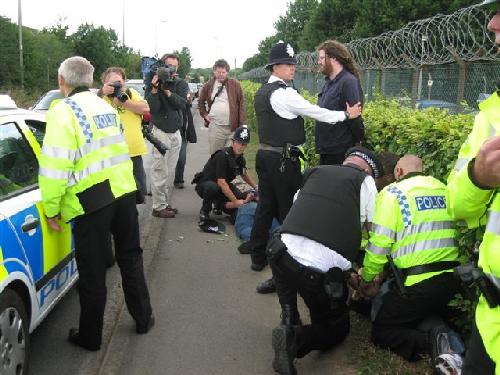 Thanks for the updates on the arrestees, and the poems.

Sorry about the misquote, Andy. I'm sure it sounded like "marathon", but now you mention it, "American" makes far more sense.

That movie is coming soon .... honest!

The movie, as promised

Here's a movie of the day. Includes a lorry being turned away from the base, the police closing the outer gates, some samba, some poetry, and what I could see of the arrests. 16MB, 6 minutes 13 seconds.