Newcastle residents held a deathly protest last week outside the Government Offices for the North East, Newcastle, at the Government's continuing failure to back calls for an immediate ceasefire in Lebanon. 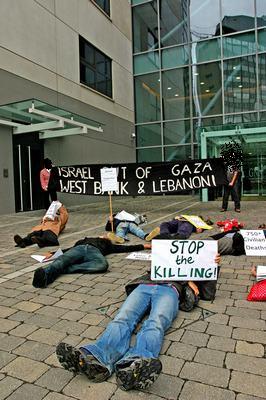 "Israel's attacks on Lebanon have already killed over 900 Lebanese civilians, wounded thousands, and displaced over 800,000 people. Thousands of civilians have lost their homes, and now face shortages of food, water and medical supplies. Under international law, this sort of collective punishment, which targets civilian populations, is illegal and constitutes a war crime. Britain has both a legal and moral responsibility to speak out. Our Government can and must demand an immediate ceasefire."

Other protests have included food not bombs and banner drops over city motorways.