Report of all Scotland demonstration for Lebanon Saturday 12th August 2006

This is a 1,770 word piece with 20 photographs about the large and successful demonstration for Lebanon on Saturday 12th August in Edinburgh. 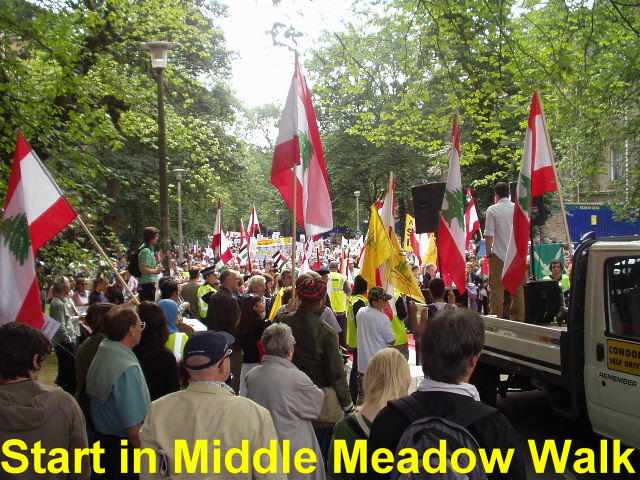 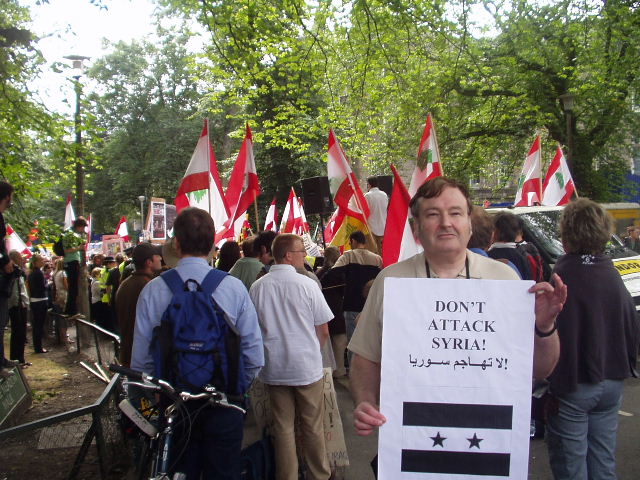 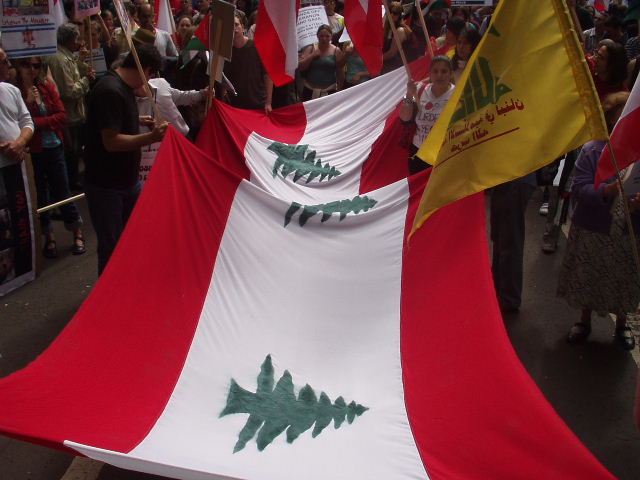 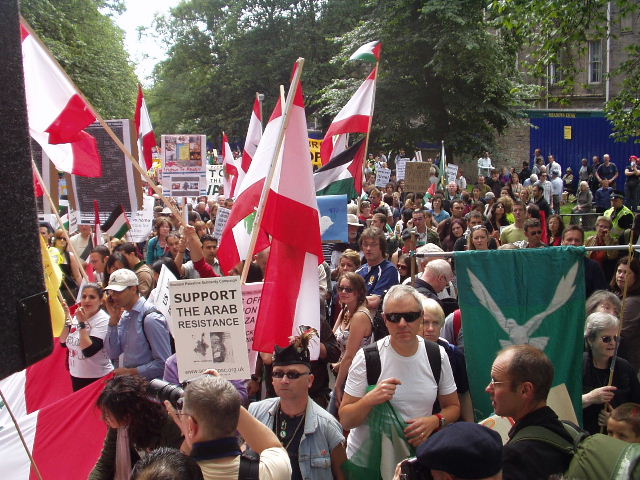 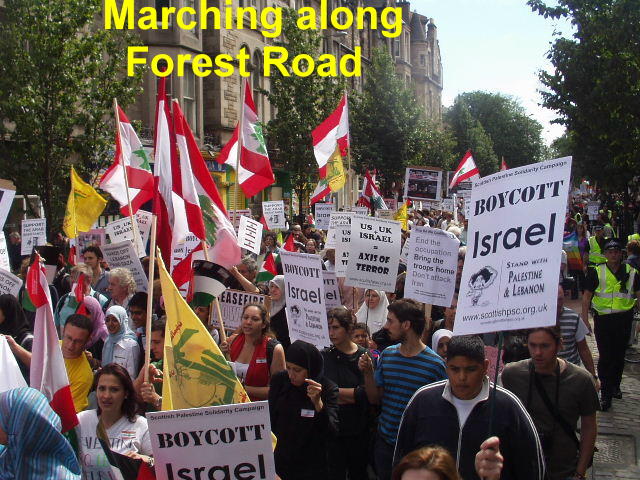 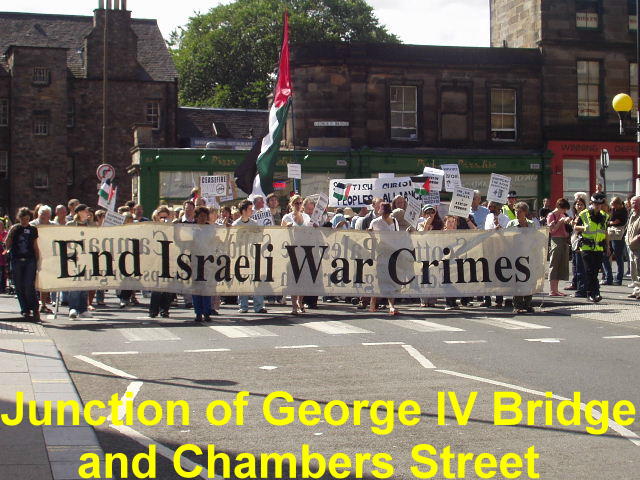 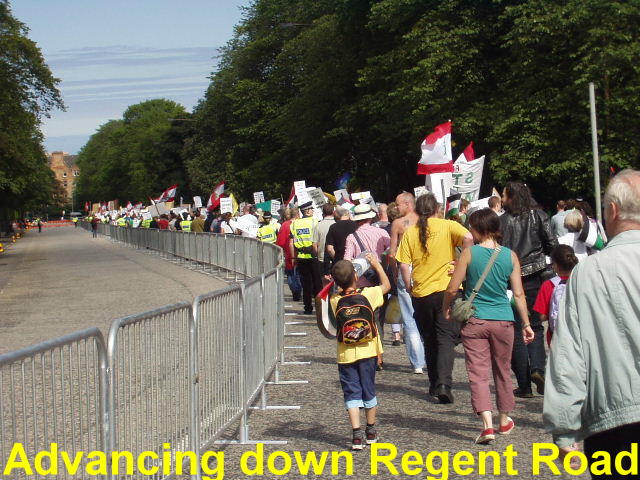 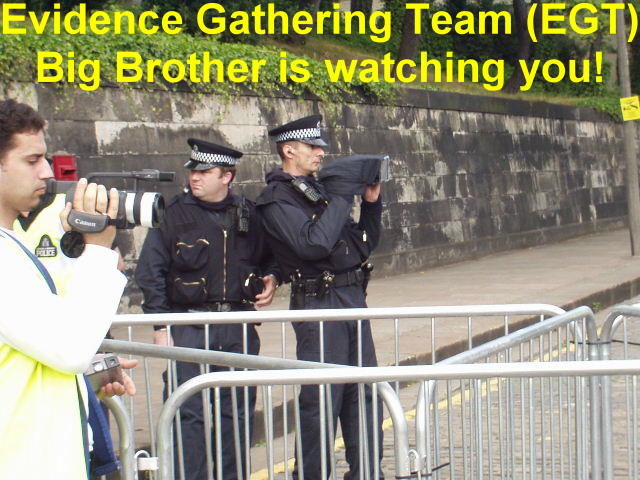 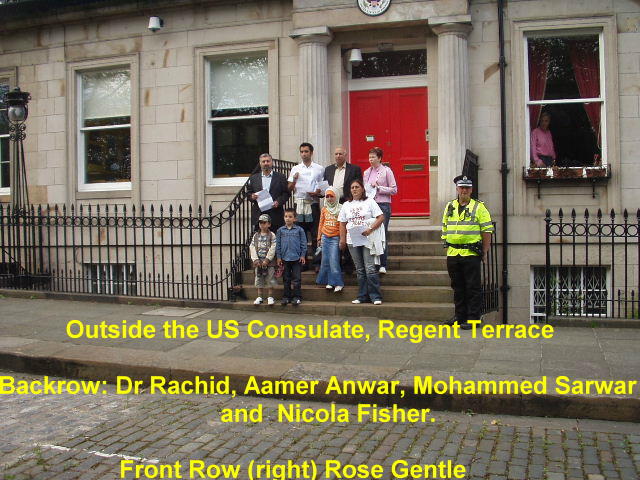 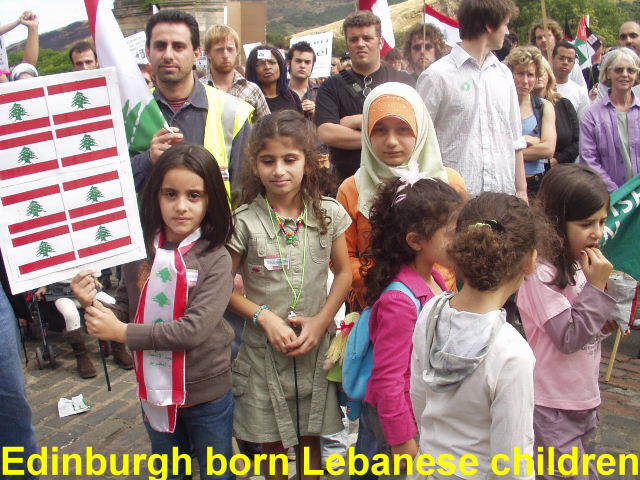 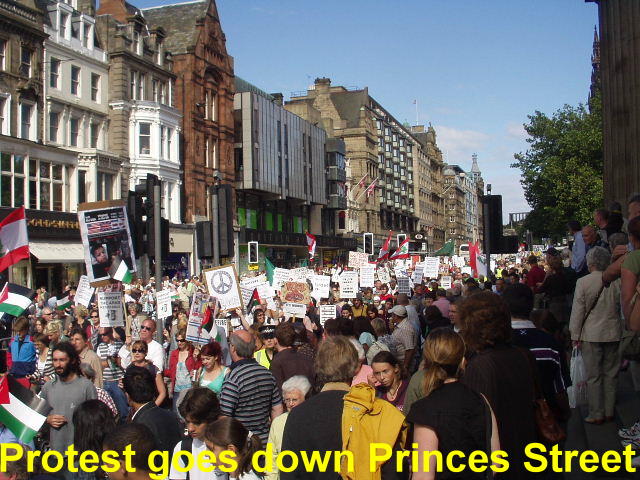 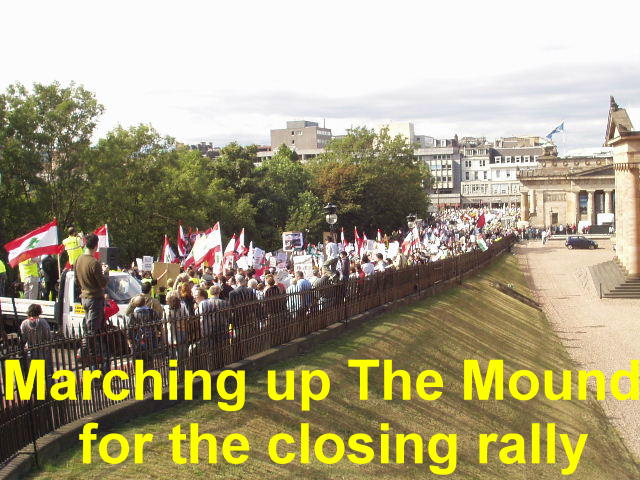 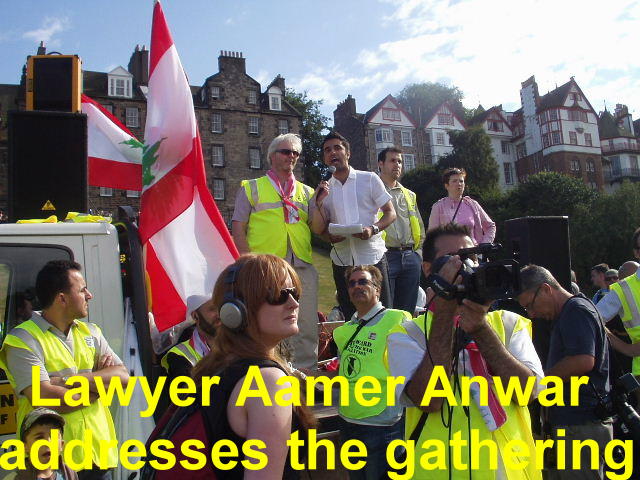 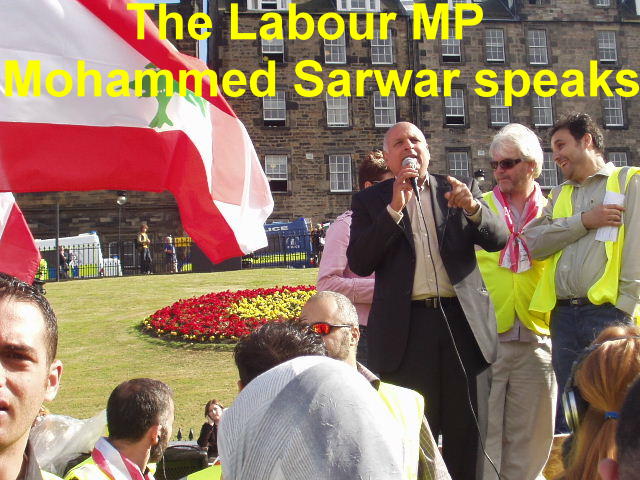 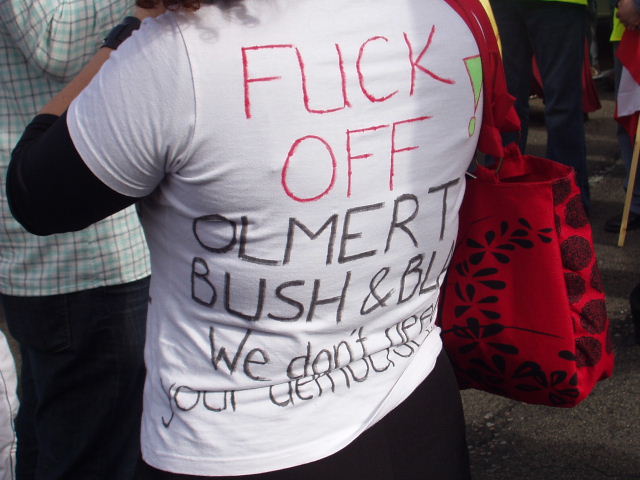 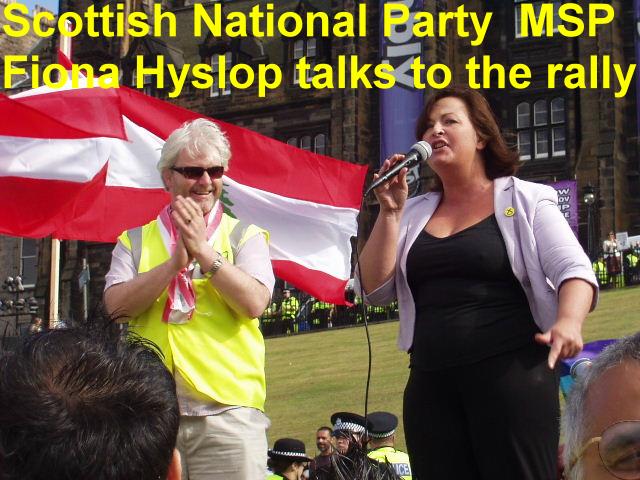 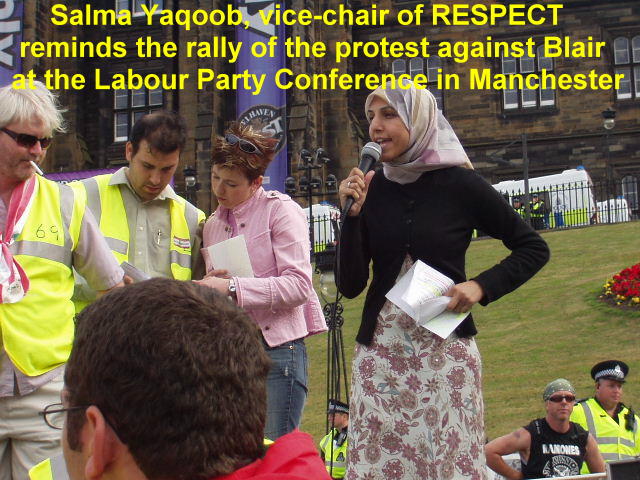 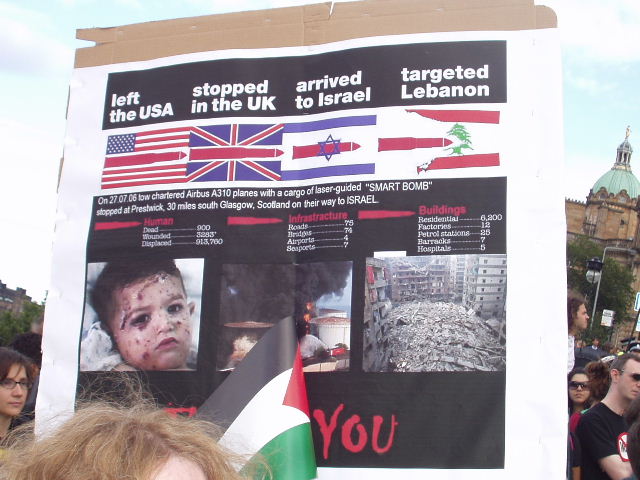 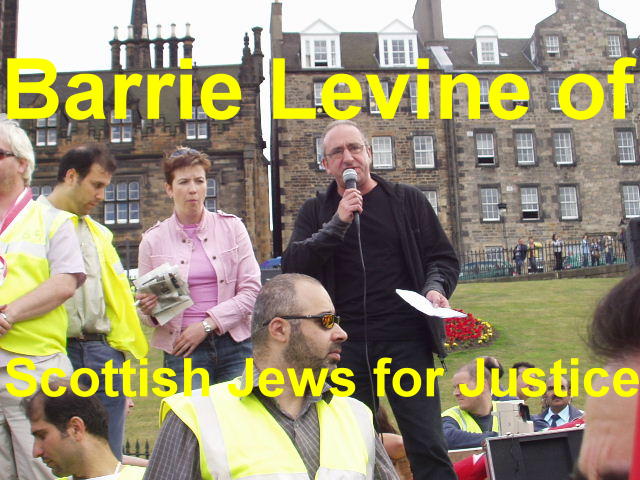 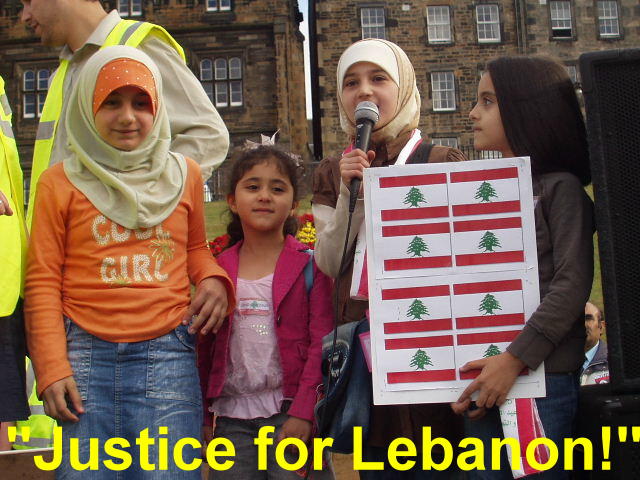 Report of all Scotland demonstration for Lebanon
Saturday 12th August 2006

Saturday 12th August saw a massive all-Scotland demonstration in Edinburgh to protest the Israeli attack on Lebanon and to say no to any assault on Syria or Iran. On the same day there were a large number of protests around the globe including Sydney, Australia; Toronto, Canada; Washington DC, USA and Paris, France.

The Edinburgh demonstration was called by called by Edinburgh Stop the War, Glasgow Stop the War and supported by Edinburgh Palestine Solidarity Campaign, CND, Peace and Justice Centre and many more. The march was due to start at 2.00pm but waited half an hour for the arrival of 3 coaches from Glasgow.

There was a multitude of large red and white Lebanese flags as well as numerous Palestinian colours and even the odd Syrian flag.

After numerous chants of: “George Bush, CIA, How many kids have you killed today? “ “Justice for Lebanon!” “Stop the War; Stop the bombs, Ceasefire now!” and “George Bush, terrorist!” the large and colourful gathering moved off at 2,30pm.

Placards read `Support the Arab resistance`, `Scottish Jews for a Just Peace` and `Boycott Israel` as the march moved along Forest Road and Chambers Street to the South Bridge. There were several giant banners including ` End Israeli War Crimes` and `End Israeli Terror`.

The protest march crossed the Royal Mile just before 3.00pm where many Festivalgoers looked on. On foot down the North Bridge the procession turned right in to Waterloo Place and along Regent Road passing the Nelson Monument on the left and St Andrew’s House on the right. There was a heavy police presence by the junction of Regent Terrace and Regent Road near the US consulate.

Proceeding past the Greek temple-like columns of the old Royal High School the march turned at the end of Regent Road near the bowling green and went back up towards the American Consulate. The entrance to Regent Terrace was closed and only a handful of people were let through to leave a protest letter and some children’s shoes outside the consulate building. There was nobody in the consulate office to speak to the small group, which included Rose Gentle of Justice for Gordon Gentle (her son), MP Mohammed Sarwar and human rights lawyer Aamer Anwar. The rest of the demo held a minute’s silence for the victims of the violence at 3.30pm, which was started and ended with short burst of an air raid warning siren.

The presence of an EGT (Evidence Gathering Team) team was observed though it was unclear what they were looking of evidence for. Here is a description of the usefulness of `evidence` gained by this furtive method:

EGT: `Evidence provided by video footage can be the most compelling and successful in convicting the perpetrators of criminal activity. In my force, the use of cameras teams, known as Evidence Gathering Teams (EGT), in public order situations has proved over the years to be extremely beneficial in capturing that vital evidence which obtains the guilty plea or verdict at court. ` (By Insp. Steve Baxter Portsmouth Police (UK))

Lebanese speakers read out poetry and made short, impassioned speeches calling for an end to the Israeli occupation of Lebanon. A speaker called Rabbe said that over 1,000 Lebanese people have been killed, over a third of them children. The infrastructure of the country has been destroyed including electricity, roads, hospitals and airports. The United Nations was taking too long to call for a full ceasefire.

The march recommenced around 3.45pm chanting “Ceasefire Now!” and “George Bush, terrorist!” as they walked down Waterloo Place towards the Wellington Statue. “1,2,3,4 stop the bombings, stop the war”, “5,6,7,8, Israel is a terror state!”

With one half of Princes Street closed to traffic the marchers made their way along to The Mound where there was left turn up the hill to just past the National Gallery. By now it was past 4.00pm, a little behind schedule due to the late start. There was an appeal for donations to the cost of the demonstration followed by the playing of the Lebanese National Anthem.

Then Glasgow based human rights lawyer Aamer Anwar announced that a letter of protest had been handed in to the US Consulate but there no official who could deal with it, then children’s shoes were left outside to represent the thousands of children who are left without mothers and fathers. He said that Bush and Blair had made the world a more dangerous place with their policies. He said there were a million refugees in Lebanon and he called Bush and Blair war criminals. He called for liberation for Lebanon and Palestine.
He read out a letter from Tommy Sheridan the Scottish Socialist Party MSP who expressed solidarity with the demonstration and had similar sentiments.

Mohammed Sarwar, Labour MP for Glasgow Central spoke next and condemned the transportation of US bombs to Israel through UK airports. He criticised Tony Blair for his slavish following of George Bush. He reminded the crowd of the lies the government told about Iraq’s supposed weapons of mass destruction. He denounced Tony Blair’s refusal to call for an immediate ceasefire.

Chairperson of Glasgow Stop the War coalition, Nicola Fisher, chaired the speakers and introduced Fiona Hyslop of the Scottish National Party. Fiona Hyslop MSP is currently the SNP Shadow Minister for Education and Lifelong Learning, and a Member of the Scottish Parliament for Lothians Region. She advocates a Scotland free of nuclear weapons. She said that people in Scotland feel the pain and sympathise with the people of Lebanon. She articulated that there would no peace without justice and there had to be justice for Palestine.

Another speaker pointed out that the bombs falling did not distinguish between Christian and Muslim, white or black. Lebanon is being bombed form the south to the north from the east to the west.


Dr Rachid Mohamad of the Glasgow Lebanese Community addressed the rally after that to lead a chant of “Down, down, Israel!” He said that the whole Middle East was suffering and the bombing of Lebanon was indiscriminate with Israel using prohibited weapons. It was impossible to reach the wounded buried under the rubble. After 32 days the world just watches. Resolution 1701, which was passed on Friday, allows Israel to continue its military occupation. Juts hours after the implementation of the resolution there were more massacres in Lebanon. (Here is the text of UN Resolution 1701:

RESPECT councillor Salma Yaqoob was next and spoke of the news headlines being dominated by the so-called terrorist plot to blow up people in the skies of Britain. She continued: “Let’s talk about a real terrorist plot, over the skies of Lebanon that is happening right now! We in the anti-war movement oppose terrorism but unlike Tony Blair and George Bush we oppose all terrorism! The state sponsored terrorism which is being conducted by the biggest terrorist group in the Middle East today is the Israeli government. It is state sponsored terrorism carried out by Israeli pilots sitting in US made planes who have killed over one thousand Lebanese civilians, almost half of them children. That’s the equivalent of 24 9/11s in a country of only four million people - and they tell us about terrorism! Let’s be very clear, it is George Bush and Tony Blair who are driving this war - they are not honest brokers. It is no coincidence that we had Israel, Britain and the US on one side and 150 countries on the other side calling for an immediate ceasefire!”

The plan was that Lebanon was a war map for Iran just as Afghanistan was a war map for Iraq. She spoke of the heroic resistance of the Lebanese people as well as the resistance of the Cuban and Venezuelan people. She saluted the people of Edinburgh for turning out in such large numbers. She urged the rally to turn out en masse to protest at the Labour Party Conference in Manchester in September.

Following Yaqoob was Barrie Levine of Scottish Jews for Justice, who gave an excellent speech. As a Jew he utterly condemned the actions of Israel in Lebanon and Palestine. He said that not all Jews supported the actions of Israel. He spoke of standing in solidarity with the people in Palestine and Lebanon. He said that unless there was just peace in Palestine there cannot be a solution to peace in the Middle East overall. He told the crowd of the 10,000 who had marched for peace in Tel Aviv the previous weekend. He called for an immediate ceasefire and felt that the UN resolution would not end the conflict. He finished by saying that the state of Israel did not act in his name.
People had joined the SJJP group from Edinburgh, Glasgow, Dundee, and the far North. One supporter, in her eighties, made a 17-hour round trip to join the group! She said, like many other people there, that sometimes you just have to act, and this war in Lebanon is such a time.
Scottish Jews for Justice:


Elaine Wishart of the Edinburgh City branch of UNISON spoke next and echoed previous speakers in calling for an unequivocal ceasefire. The bombing had to stop she said and the day’s demonstration would send a message to Tony Blair. She was proud that UNISON was part of the protest. She urged everyone to write to his or her MPs and finished by saying that an injury to one was an injury to all.
Then Kara Szifris from the Scottish Palestine Solidarity Campaign spoke. She had just returned from Palestine and told of the humiliation of the Palestinian people at the hands of the occupation. The goal of the occupation was to force Palestinians off their lands. The apartheid wall divided communities and made it difficult for people to reach their land. She advocated a boycott of Israeli goods.

The final speaker was Angela McCormick of Globalise Resistance who said that the day’s event had done the peace movement proud. The demonstration represented the many people around the world who stand with the Palestinian and Lebanese people. She said Bush and Blair were alone. She finished by telling Blair not to lecture her about Western values or democracy or civilisation.

The rally finished just after 5.10pm with some small Lebanese Scot children chanting “Stop bombing children” and “Say Hey, Ho, Condi Rice has got to go!”


The police estimate of the crowd was about 5,000 and the chair, Nicola Fisher said that could be safely doubled to 10,000.