It found overwhelming support for schemes that focus on crime prevention with more than half (54%) saying they were in favour of making offenders work in the community on projects in schools, old people's homes or parks to stop them re-offending. 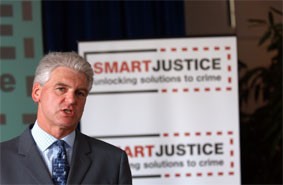 The majority of victims of crime believe non-violent offenders should be punished in the community rather than being sent to jail, according to a new report.

A survey of people who have suffered at the hands of criminals found almost two thirds (62%) do not think prison is an effective way of preventing re-offending.

It found overwhelming support for schemes that focus on crime prevention with more than half (54%) saying they were in favour of making offenders work in the community on projects in schools, old people's homes or parks to stop them re-offending.

Nearly 1,000 victims were asked for their views on appropriate punishments for crimes such as shoplifting, car theft and vandalism.

Eight out of 10 said they believed more constructive activities for young people in the community and better supervision by parents would be the best way to stop people repeatedly committing non-violent low-level crime.

And nearly half of respondents (49%) backed drug treatment programmes under supervision in the community for drug addicts who commit crime.

The survey was carried out by ICM on behalf of SmartJustice, a five-year campaign which promotes community-based solutions to crime.

Lucie Russell, director of SmartJustice, said she wanted the Government to start tackling the causes of crime not just to appear to be tough on crime itself.

She said: "Eighty days into his 100 day deadline and all John Reid has come up with are 8,000 new prison places. This Government is obsessed with being tough on crime and is not paying enough attention to why offenders commit crime in the first place. It's no good just building more prisons, when most offenders come out worse than when they went in."

We need POLICE in Australia, not COPS or PIGS.

This is a special effort by CURE in the US. We have pasted the first part and the section about the US on the bottom for those who can't download the 1.8mb book. It gives a sense of what we could do.