Over the past few days Lebanese activists from a broad range of political and social groups have been meticulously planning an aid convoy to villages in the south. The idea was both political and humanitarian. Many villages have been without aid for some time and their situation is desperate. Meanwhile those peace loving Israelis have consistently announced that all moving vehicles in certain areas are legitimate targets. This was to be an open and passive defiance of that ban. The convoy of over 50 cars loaded with everything from food to diapers was publicly announced to both the Israelis and Hizbollah. Hizbollah had agreed to clear the way so there was no excuse for any bombing in the vicinity. No response from the Israelis who are presently refusing to allow NGOs like MSF (Medecins sans Frontieres) and the Red Cross a safe passage. In the end Lebanese National Security guards on Mount Lebanon stopped the convoy on the grounds that it would be too dangerous to proceed. 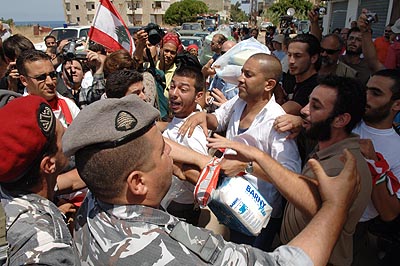 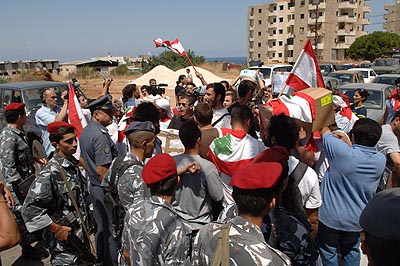 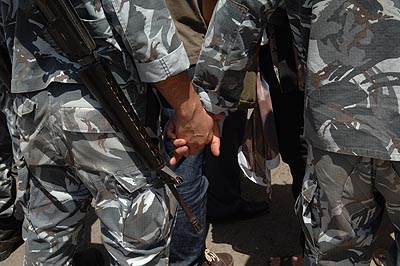 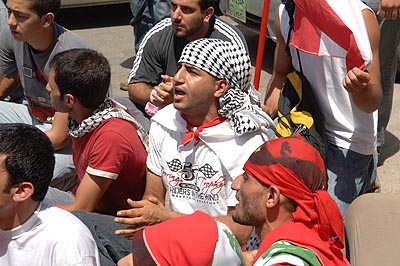 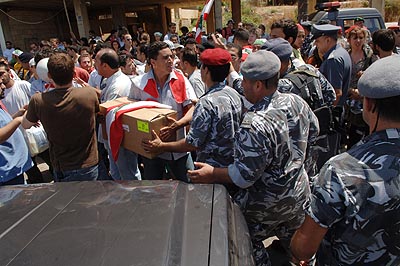 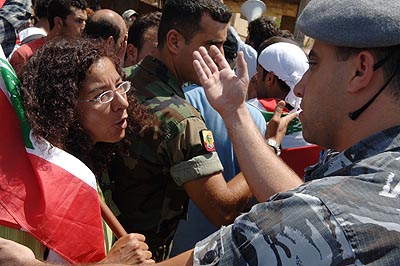 Initially the organisers of the convoy tried to negotiate a passage with the guards who refused to budge. The people made it quite clear that they were aware of the risk and were prepared to take it. Then activists tried to put pressure on the authorities by taking aid from the cars and trying to cross the checkpoint on foot. Many of the participants were from the affected areas and desperate to see what had become of their communities. It was an emotional standoff and tempers became frayed with much shouting and a small amount of pushing and shoving. There was no violence. The guards were on the whole sympathetic to the activists but had their orders.

Before long the decision was made to turn back. The traffic jam caused by the blocked road was in danger of inhibiting the progress of emergency vehicles and no-one wanted that to happen. The reason that the authorities had for stopping the convoy remains unclear. It is possible that the commander present took the decision himself. Last night Red Cross ambulances were attacked by the Israelis, so people are understandably nervous. It is also possible that the corporate media may have unwittingly sabotaged the project. They had been phoning various senior members of the Government about it. If it had ended in a bloodbath then various politicians would be asked why they had let it go ahead when they knew about it in advance.

On one hand a public act of defiance that includes the media and international activists can afford some protection. Such tactics have consistently worked in Palestine. On the other hand, it lays the ground for a stop to be put to the action. A Catch 22. The important thing, however, is that over 50 vehicles and 100 people were successfully organised for this project. The convoy will go ahead in due course once this obstacle has been overcome. If there is a ceasefire on Monday as many people are now expecting then the obstacle disappears completely. Well done to everyone involved.