In Novi Sad the Caravan was welcomed and looked after by people from two organisations. One is Kulturanova, which organised various visual arts festivals and has been campaigning for a cultural youth centre in the city. The other is the 'Volonterski Centar Vojvodine' a volunteer centre, which supports and runs a variety of projects. The week in Novi Sad was one of good workshops, good actions and the occasional party!

Most Caravan members were accomodated on an old Ukranian cruise ship in the Danube, where workshops took place too. The Mischief Makers build a giant bird as a symbolic way of opening up Serb borders and made an impressive mosaic on the same theme, possibly to be used in a new youth centre. Clowns trained and joked about at the final parade to end the week of workshops. An other impressive feature of the activities in Novi Sad was the quickly formed samba band, which did a couple of stunning performances in the centre of town. The video group made 3 videos and did several open air screenings.

At the end of the first week a demonstration was held for the cultural youth centre as well as for the opening up of Serbian borders. During the second week some Caravan members worked at a Roma settlement and prepared a film screening and demonstration, demanding an electricity supply, which the settlement in its 33 year existance has had no access to.

Audio: Milan from Kulturanova speaks on local radio about Caravan 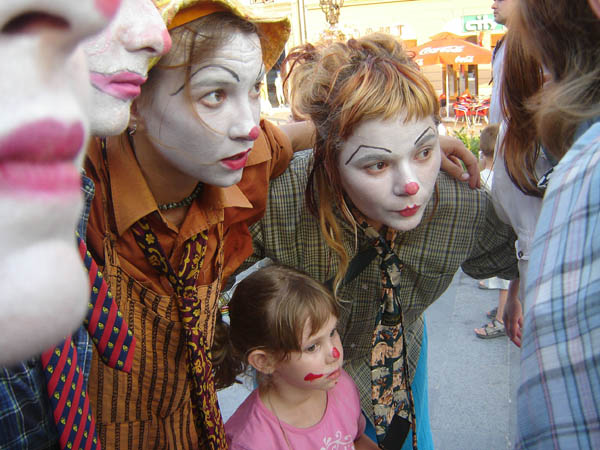