The World Health Organization warned earlier this week that the countries hit hardest by AIDS desperately need 4 million more health workers to cope with the crisis. Many of the locally-trained doctors and nurses in these countries have been lured away to the United States and Europe by higher salaries. We speak with Smita Baruah of Physicians for Human Rights. 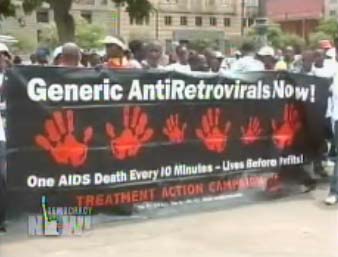 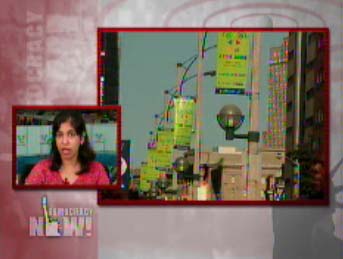 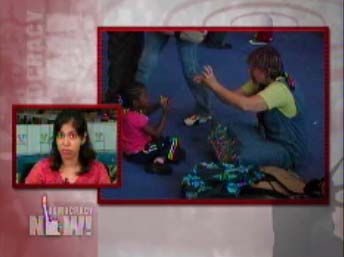 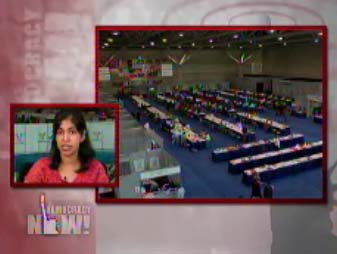 24,000 scientists, activists and officials are gathering in Toronto, Canada this week for the 16th International World Aids Conference - the largest conference on AIDS ever held. An estimated 25 million people have died of AIDS since the first cases of HIV were reported a quarter of a century ago.

Today we will spend the hour speaking with activists from around the world.

Earlier this week the World Health Organization warned that the countries hit hardest by AIDS desperately need 4 million more health workers to cope with the crisis.

These countries - especially in Sub-Saharan Africa - are suffering from what is known as a brain drain. Many of the locally-trained doctors and nurses have been lured away to the United States and Europe by higher salaries.

In South Africa, 37 percent of locally trained doctors are now working outside the country. In one section of Uganda, half of the doctors recently trained in handling HIV have left the country to work at NGOs in the region.

AMY GOODMAN: Smita Baruah joins us from Toronto, where she’s attending the 16th International World AIDS Conference. She is the Senior Government Affairs Manager for Physicians for Human Rights. We welcome you to Democracy Now!

AMY GOODMAN: It's very good to have you with us. Can you talk about this crisis of medical workers leaving the countries hardest hit by AIDS?

SMITA BARUAH: Yes. You know, one of the things that's been great about this conference is that the issue of the lack of health care workers has been really highlighted in many different ways, through sessions, through white coats and balloons, through press conferences. Two years ago in Bangkok this issue was rarely discussed, and now it has become a central focus at this conference.

Right now, Sub-Saharan Africa, that’s facing the highest AIDS epidemic, needs one million more health workers in order to combat this crisis. As you said, doctors are leaving countries like Uganda, Rwanda, Tanzania, Malawi. In the entire country of Malawi, Malawi can right now only treat 1% of those infected with HIV and AIDS, 1% of more than a million, many, many millions of Malawians who are affected by AIDS right now.

And there are many factors contributing to this. One is certainly doctors leaving the countries for better opportunities in the United States, Canada, the UK. And we are also part of that problem. We have not increased our own training capacity for nurses and doctors and have turned away over 150,000 nursing applicants, because we don't have the capacity to take them in in our own universities. And then we tried to solve that problem by bringing in more doctors and nurses and health care professionals from these countries who probably need them more than we do in some respects.

And other factors are also contributing. Many of these places, they have to work in unsafe working conditions. There is not -- you know, treatment is not available for health care workers themselves. They also leave because their training doesn't match. They’re trained in Western-style medical schools, and then they go to a rural community, and it's not -- you know, it's very different from what they've been trained to do and learned to do. And so, we must look at the way health professionals are trained in these countries. We must do some skill transfers. The World Health Organization talked about what they call “transfer of skills,” or using lower cadre of health workers, training community health workers so that they can do some of the jobs of doctors and nurses and do some of the treatment and the care.

AMY GOODMAN: Now, you also, Smita, have the issue of health workers themselves getting AIDS, is that right, and HIV?

SMITA BARUAH: That's correct. That's correct. And that’s part of the unsafe working conditions that they -- they're not protected right now. Sometimes they don't have access to the treatment and/or prevention. A lot of them are afraid to disclose that they are HIV-positive, and therefore don't seek treatment, because they are afraid of losing their jobs. And so one of the things that we and other organizations are trying to focus on is getting the treatment for health care workers themselves.

AMY GOODMAN: I’m looking at the World Health Organization report, “Treat, Train, Retain,” which looks at skilled medical workers in Africa who have been lured abroad, ironically most often by the United States and Europe. Explain exactly how that happens.

SMITA BARUAH: Well, you know, sometimes they’re lured by the financial opportunities. They're lured -- for instance, in our own country, we had a provision included in the immigration bill that’s being debated right now in U.S. Congress that lifts the cap, the number of immigrant nurses that can come to this country. And by doing that, you know, you're taking away nurses from the Caribbean, from African countries. We provide incentives for them to come here. And we're not advocating that they don't have the right to leave their countries for better opportunities, but we do recruit from abroad. We do change laws in our own immigration to allow more doctors and nurses to come in.

And part of that is that's how we try to solve our own problems of -- you know, many rural communities in the U.S. are also facing health care worker shortages. Many urban areas in Chicago, for example, like Chicago in the South Side, a hospital had to almost close, because they didn't have enough doctors and nurses. And the way we try to solve that problem is just by bringing doctors and nurses from countries like Africa, and rather than trying to come up with our own strategy, rather than investing more in our own nursing and medical schools, we lure, we, you know, provide incentives through immigration laws and through recruitment abroad, we try to bring in health professionals from elsewhere.

And what we think that industrialized nations should do -- we acknowledge that, yes, we are also facing a crisis of our own in our own countries, but the way to solve that is not by robbing doctors and nurses from other countries. We really need to empower our own doctors and nurses and admit more nurses and doctors into medical and nursing schools and really have own domestic strategies.

AMY GOODMAN: Finally, Smita, can you describe what role this conference plays in dealing with these issues? I mean, how effective is it? You’re now in Toronto. We’re spending the hour there at this, the largest international AIDS conference ever held in the world, the 16th annual one. How do these issues get dealt with in Toronto at the conference?

SMITA BARUAH: I think in several ways. I think that by raising this in plenary sessions and in breakout sessions with our international colleagues, we are able to come up with a joint -- it provides an opportunity for a joint movement towards addressing these issues. It puts pressure on donor governments and country governments to come up with plans. That is what we're trying to do at this conference, is trying to keep the pressure up. If they are committed to combating the AIDS crisis, they must, they must look at the lack of health professionals in these countries, and by raising it at international conferences such as this one, this is the place where we can put the maximum pressure.

And working with our colleagues, we have many delegates from Africa.