Over 200 people from across the UK gather in Hull with one single aim - to close down B&K Universal! 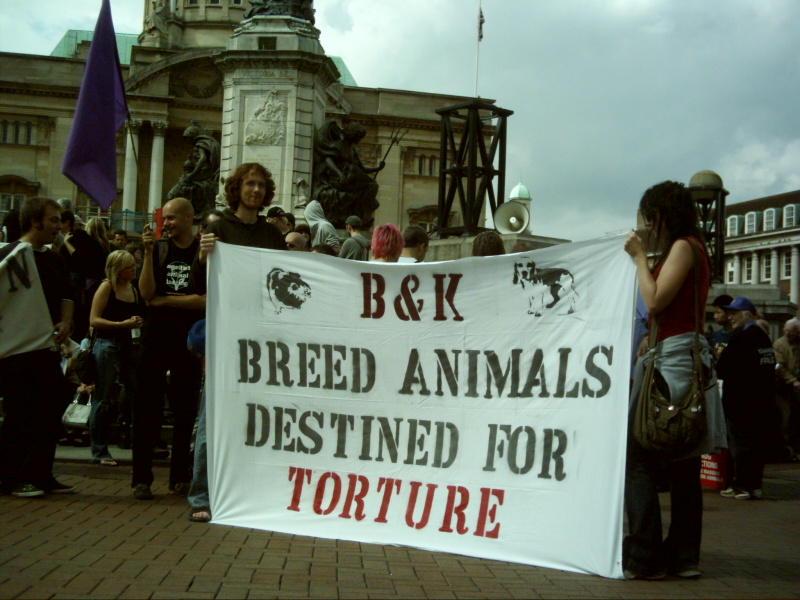 The first of many national demonstrations was a great success with over 200 people from across the UK gathering in Hull with one single aim - to close down B&K Universal!

Luke spoke about how animals from B&K are sent to labs across the UK to be killed in viscous experiments and the police corruption involved in the policing with B&K. Everyone was told about a senior Humberside Police officer having meals with Gerry Bantin [B&K MD] and about no-matter how hard the police try to stop us we will win.

Next Amanda told everyone about the SNGP campaign which successfully closed down Newchurch Guinea-Pig Farm and the current state of the vivisection industry. She spoke about how B&K Universal will close down and we all need to keep fighting at every opportunity to save the animals.

Keith Mann discussed how the police and government are scared of the AR movement and that is why they are trying to stop people holding placards and banners. He also spoke about the EDM that over 1/2 the UK MP's have signed and how thousands die each year as a result of animal tested drugs. The passionate activist also reminded everyone that the real terrorists are those in the labs, not those who fight for animal liberation.

Mel Broughton spoke about Oxford University and their injunctions trying to stop the truth in SPEAK’s campaign to stop the Oxford animal lab. He also said about Tony Blair's lies and that the Oxford lab will be stopped, and B&K, HLS and other centres of animal abuse will be closed.


Humberside Police thought it was fit, following advise from the present NETCU (National Extremism Tactical Co-Ordination Unit) officers, to arrest two people for holding a banner they deemed offensive. Why? Because it had a picture on of the truth, of an animal killed inside a UK lab! What kind of a country are we living in where you cannot even show the truth without the risk of arrest?

The 200-strong group then commenced to march round Hull and show our determination to stand up against the police injustice and fight for the animals imprisoned in hellholes like B&K, Oxford University and HLS. Humberside Police were using frightened horses, which were showing signs of distress and discomfort, but these poor creatures were soon taken away after liasing with the police.

Public support was very high and some people passing even joined in the march, and members of the public stopped and listened to the passionate speeches.

We must again thank every single person who attended the demonstration and made it a success. This is the first of many demonstrations on the road to closing down B&K Universal and in the fight to liberate those 400 beagles and thousands of rodents imprisoned and destined for a life of hell because of B&K Universal.