Starbucks are about to open in Egypt - they already have nearly 10,000 branches around the world and as they themselves put it every cup of coffee helps `the close alliance between the United States and Israel`. 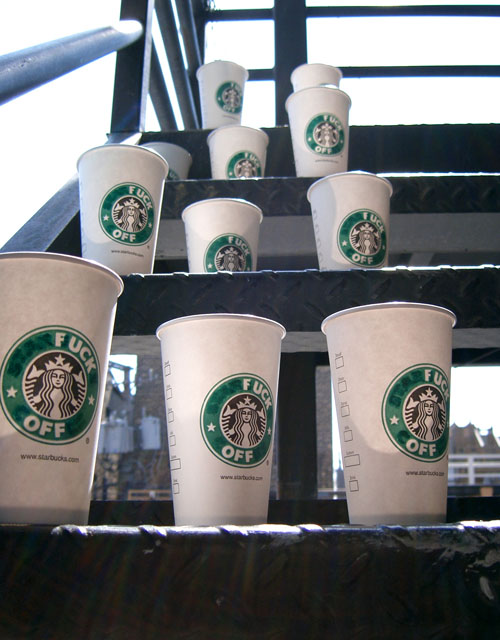 A Thankyou To All Starbucks Customers

Written by Howard Schultz
Tuesday, 11 July 2006
Dear Starbucks Customer,
First and foremost I want to thank you for making Starbucks the $6.4 billion global company it is today, with more than 90,000 employees, 9,700 stores, and 33 million weekly customers. Every latte and macchiato you drink at Starbucks is a contribution to the close alliance between the United States and Israel, in fact it is - as I was assured when being honoured with the "Israel 50th Anniversary Friend of Zion Tribute Award" - key to Israel's long-term PR success. Your daily chocolate chips frappucino helps paying for student projects in North America and Israel, presenting them with the badly needed Israeli perspective of the Intifada.

Starbucks, through the Jerusalem Fund of Aish HaTorah, an international network of Jewish education centres, sponsors Israeli military arms fairs in an effort to strengthen the special connection between the American, European and Israeli defense industries and to showcase the newest Israeli innovations in defense. As my contribution to the fight against the global rise of anti-Semitism, the reason behind the current conflict in the Middle-East, I help Aish HaTorah sponsoring the website "honestreporting.com" and produce material informing of Israel's side of the story.

Without you, my valued customer, I wouldn't be able to raise hundreds of millions of dollars each year to support Israeli citizens from terrorist attacks and keep reminding every Jew in America, to defend Israel at any cost. $5 billion per year from the US government are no way near enough to pay for all the weaponry, bulldozers and security fences needed to protect innocent Israeli citizens from anti-Semitic Muslim terrorism. Corporate sponsorships are essential.

Having the bigger picture in mind, Starbucks have donated a store to the US army to help in the "War on Terror". I cannot emphasise enough, how vital the "War on Terror" is for the continued viability and prospering of the Jewish State.

So next time you feel like chilling out at a Starbucks store, please remember that with every cup you drink at Starbucks you are helping with a noble cause.

The above copied article is available on this URL should you want
to check it out yourself.

Everytime time u visit Starbucks and drink a cup of chocolate chips frappucino ... think your drinking a cup of ARAB BLOOD

WE CAN MAKE THE DIFFERENCE ..... BOYCOTT STARBUCKS