Alarming rise of Children’s ID databases and biometrics in schools

On top of ID cards and the move to NHS electronic records, another major government plan with a potential for hideous invasion of privacy and loss of personal freedom comes out of the Children Act (2004). The new Act allows the setting up of incredibly invasive databases by the Secretary of State and/or children's services authorities in England. At the same time pupils and parents are getting more vocal and organised in their protests against the alarming rate of introduction of biometric systems in schools. These have included fingerprinting (and even iris scanning) of children for school dinners, attendance registers, and use of libraries or ‘learning resource centres’. 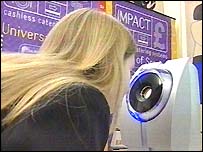 Iris-scanning - one example of biometrics used in schools

New Labour is getting ready to implement its child database plans. The powers to set these up were added to the Children's Bill following the Lord Laming report into the death of Victoria Climbié. All for the good of the child you might think? But the information they want on file is very wide-ranging - school achievements, health visits, social security and police records for all young people under 18. Margaret Hodge, in her Blair-created role of Children’s Minister admitted, in true New Labour style, that it could “also be used to support service planning and delivery”. So even before the Children Act was passed, the state was confusing its message about what databases would really be for (just as they have done for ID cards that were originally called Entitlement cards before ‘war on terror’ and ‘controlling immigration’ took over as a bogus justifications). State interference seems to be the order of the day for any part of life that touches the public sector.

On the other hand, the rush to biometrics seems to result, at least in part, from the heavy influence of security companies. Systems installed in Loughborough (Leicestershire) are being pushed in by ex-Loughborough grammar boy Mark McMorran, who runs Cyclone Industries. Their fingerprinting system ‘Live Register’ is being used for attendance and managing school dinners. It has been installed at the grammar school and Humphrey Perkins High School in Barrow-on-Soar (Leics). According to the company, around 200 schools across the country had expressed an interest in the scanners.

In 2004 a Cambridgeshire secondary school, Impington Village College, was thought to be the first state school in the UK to use fingertip-recognition registration system for pupils. Class teachers watch children arrive and check that each fingertip scan has been logged. If a pupil fails to register, repeated email and text messages are automatically sent to the parents' computers and mobile phones. According to the local BBC, Cambridgeshire County Council was monitoring the trial to see if the system could be introduced in other schools. This now seems to have happened, judging by protests by parents at St. Matthew’s primary school. At primary schools, children who are too young to place their fingers on scanners are being helped to do so by school staff.

Toot Hill school in Bingham, Nottinghamshire, have apparently been using a biometric system in their Learning Resource Centre “for years”. LRC Manager Mrs Litherland, proudly reported in their Xmas 2005 bulletin that, “The LRC does not use a dated library card system but is fortunate to have a fingerprint reader, which recognises students by their thumb print; this system enables a faster loan service when issuing stock to students.” But we also hear that, “Once a student leaves school their record is deleted from the LRC database” and that “All users have the option not to be fingerprinted but found manually.” A result of student complaints perhaps? Or at least a recognition that there might be a problem with such a wonderfully efficient system.

Another factor in the rise of biometrics is the idea that schools need to see what children are eating at lunch to make sure they are getting proper nutrition. This was the main justification for one of the Loughborough schools. It’s great if some schools are managing to cook fresh food again rather than rely on heated-up rubbish from mass catering outfits like Scolarest, but why do we suddenly need fingerprinting? It just doesn’t follow. Then we hear it’s about cashless school dinners so children don’t get robbed of their dinner money, or so there is no ‘free school meals’ stigma for those without, or the nutrition argument is rephrased so it is about fighting obesity. It seems like someone is coming up with any number of reasons to introduce the new technologies - security companies looking for any ways they can to sell their kit, perhaps?

In another example, the Venerable Bead Secondary School in Sunderland won a 2005 Computing Award ‘Public Sector Project of the Year’. Amongst the fancy technologies they were using was iris-scanning school dinners and finger-printing for library books. Again, it’s perhaps not surprising that computer industry is so pleased to acknowledge any high-tech installation that will ensure their continued existence after the IT stock-market bubble burst that destroyed many companies and ruined the profit of the ones that did survive.

The industry buzz-phrase to counter any privacy concerns is that “children’s fingerprint images are not stored, only a numerical code”. But hang on, aren’t codes generated from points on your fingerprint going to become as personal as the fingerprint itself, especially if the code is produced according to a national or international standard? The same for passports - it’s no less invasive if they store some code for the distances between your eyes/nose/ears instead of a photo of your face.

Some school students are starting to organise their own campaigns. At Edgbarrow school in Crowthorne, Berkshire, six formers have criticised plans to pilot a fingerprint registration scheme in September. Sixthformer Shaun Woodage, 17, said “clocking in and out” at each end of the day would make him and his friends feel like criminals. “The lack of trust and respect from the school to the students seems to be apparent. We have the right to hold on to our own biometrics and have the right to say who we shall disclose them to.”

Headteachers and other teachers who are wowed by these new technologies need to be challenged. Many people already see schools as places where our children learn conformity, and so understand that biometrics in schools are a way of conditioning them for ID cards and a lifetime of being tracked by the authorities and future employers. A new website Leave Them Kids Alone has been set up as part of a campaign to counter the expansion of fingerprinting in schools and show that thousands of noddy biometric systems are being installed across the country.

Sources, including pictures of children being fingerprinted and iris-scanned:

http://www.toothill.notts.sch.uk/data/contact/contact1205.pdf
Leave Them Kids Alone (against fingerprinting in schools):

More about fingerprinting in schools - Cambs, and Leics

Also note that the video in the main article is from BBC East Midlands today, 5 Oct 2005 (6.30pm ish), and the school might be the Barrow-in-Soar one rather than Loughborough, but it's certainly one of the two Leicester schools being supplied by Cyclone Industries.