Marco Camenisch was born in Switzerland in 1952. In the late seventies, Marco, as a militant of the movement against nuclear power plants, was engaged in many struggles to fight the local Swiss nuclear mafia. Direct action was the base of such struggles; cutting down pylons, sabotage against power stations, attacks against the people involved in nuclear mafia. 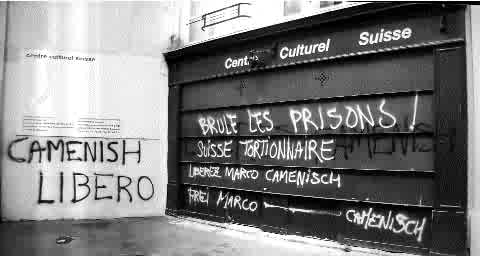 
In January 1980 Marco was arrested and sentenced to 10 years for his assaults against NOK power station, responsible for destroying the natural environment of the Grigioni area in Switzerland. During the trial, Marco refused to talk to the judge, but read a statement in which he claimed his actions as a protest against the criminal bosses of the class dominion, and for the liberation of the Earth. In December 1981, Marco escaped from the prison together with another five prisoners. A prison warder was shot dead and another seriously injured. After 10 years of hiding and clandestine struggle, Marco was arrested again (1991), this time in Tuscany, Italy, and sentenced to 12 years. He served 9 of those years while in solitary confinement in a maximum-security prison. He was also sentenced for a series of acts of sabotage including the killing of a border policeman which he has always denied. In the Italian prison system Marco went through terrible conditions of detention, aimed at destroying his strong personality and breaking the International solidarity network towards him. Such solidarity has never stopped, on the contrary it has been increasing more and more, both through public demonstrations and direct actions. In April 2002 Marco was extradited to Switzerland, where he was sentenced to another 8 years for his escape from prison in 1981 and the killing of a border policeman. In Switzerland too, Marco has been subjected to a regime of isolation and every kind of abuse and oppression including continous transfers from one prison to the other, without any regard for his conditions of ill health.

Here are few of the thousands of actions in solidarity with Marco Camenisch.

25 July 1999 - Novarra, Italy - Demonstration of solidarity outside the prison.

1 August 1999 - Turin, Italy - Explosive device full of red paint is thrown against Swatch shop in via Garibaldi, in an attack against Swiss business interests.

13 September 2002- International day of solidarity with Marco, he has just been through 3 months of special treatment. Moreover his correspondence is strictly censored and his incoming and outgoing mail often doesn't arrive, he spends recreational period in handcuffs and chains to his feet, he has closed visits after a few months waiting. And finally the torture of having spent 20 minutes inside a scanner machine with his wrists handcuffed behind his back, not to mention the humiliation of having walked though the long corridor of the hospital with his feet in chains. There are Demonstrations in Bergamo, Bologna, Florence, Genova, Naples, Triest, Madrid.

16 September 2002- Pavia, Italy - Fire to a mobile phone antenna in solidarity with Marco and all prisoners in struggle.

December 2002- Rome, Italy - An envelope full of bullets is sent to the Swiss ambassador in Rome with the message: Free Marco, death to the Swiss State and its cops.

12 January 2003- Paris, France - During the night a few boutiques of Swiss bosses were damaged and the surrounding walls filled with writings such as 'Free Marco' 'Switzerland is destroying you, we are gonna destroy it'. The locks of Adia and Adecco (Swiss work agaencies) and of Lloyd Continental were blocked with glue.

18 January 2003- Buenos Aires, Argentina - Posters claiming Marco's freedom are put on the walls of the Swiss embassy and Swiss International Air. From today Marco is on hunger strike in protest against his conditions of detention. Demonstrations also in Brussels in front of the Swiss embassy.

18 January 2003- Abetone, Pistoia - The ski lift in this ski resort in Appenines is completely destroyed by fire, causing 6 million euros of damage, sabotaging the tourist industry for the season. The claim 'Fire to the Exploiters, Free Marco'.

1 February 2003 - Barcelona, Catalonia - The locks of Zurich Insurance Company are blocked with glue and on the glass of the windows is written 'Destroy all Prisons' 'Free Camenisch' 'Stop nuclear power'.

Between September and October 2003, following the orders of the Genoa Public Prosecutor, a series of raids takes place all over Italy against a great number of comrades who showed their solidarity to Marco.

All those who were raided are eco-activists/eco-anarchists who have actively supported Marco either by taking part in demonstrations outside Swiss Embassies or by creating websites and other information about Marco. The measure starts on 17 September when the ROS (Carabinieri Special Operations) search Marco's cell and seize his computer, notes and letters. Soon after even Manuella, Marco's wife is searched. Both are accused of 'terrorist activities'. About one hundred Italian comrades from north to south underwent the same treatment and some are still under investigation.

Our struggle against nuclear power, environmental destruction and the capitalist system demands we support our prisoners, for more information, check out: