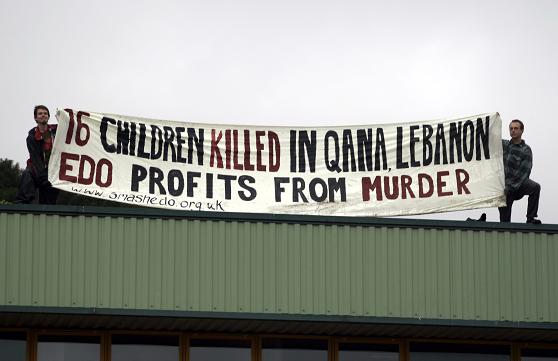 Protesters are currently occupying the roof of an arms manufacturer who supply weapons to the Israeli army used in the bombing of Gaza and Lebanon.

In the early hours of Wednesday morning (today) protesters climbed 40 feet onto the roof of EDO MBM on Home Farm Road, Brighton . Activists aim to draw attention to the production of weaponry used in war crimes.

Sarah Johnson, press spokeswoman for Smash EDO, said 'Over a thousand civilians have died as a result of Israel's bombing of Lebanon. Israel continues to kill civilians in the West Bank and Gaza with weaponry armed with components made in Brighton. EDO MBM are profiting from murder, we will not tolerate their presence in Brighton.'

This is the fourth large protest at EDO MBM since the beginning of the war in Lebanon. Shortly after the war started activists blockaded the factory by chaining themselves to barrels of cement, soon afterwards local artists brought impressions of the horrors of war to the factory gates and a held 'day of rage' was held outside the factory.

Andrew Beckett, press spokesman for the campaign said 'EDO produces components for the Hellfire missile, it was a Hellfire that was used to destroy the ambulance leaving Qana, on 23rd July this year. The directors of EDO are complicit in murder'

There is a noise protest outside the factory today between 4-6pm. Come and support the rooftop occupiers.

EDO MBM makes electrical weapons components for the Israeli military. EDO MBM manufactures components to be incorporated into the Hellfire missile, which the Israeli army has recently used to attack the civilian population of Gaza . They have organised conferences on the development of UCAVs, unmanned aircraft which are widely used in aerial attacks on Gaza . EDO Corporation, of which EDO MBM Brighton is a wholly owned trading unit, has a direct contract with the Israeli Navy who murdered 10 civilians on a beach near Beit Lahiya, Gaza, earlier this month.

The campaign started in August 2004 with a peace camp. It's avowed aim is to expose EDO MBM and their complicity in war crimes and to remove them from Brighton .

BBC News online has the story now too.

The international financial news agency AFX has picked up the story.

Forbes magazine has syndicated the story on its website.

The story came in the US just after New York Stock Exchange opened 9.30am Wall Street time.
Looking at

http://www.google.com/finance?q=EDO it can palinly be seen that the news
caused a sudden drop in the stock price.

is even better because it compares EDO Corp's performance for the day compared with the whole industry and shows how up till just before 10am in New York on 23rd august 2006 EDO were above average but at exactly the time the news of the rooftop protest came out they dropped like a stone.