This beach would usually be packed at this time of year. Every lifeguard station would be operational and the sand would be obscured by tens of thousands of sunbathers and local families. This was the hub of Beirut’s growing tourist industry. Now the bars along the sea front are as deserted as the beach itself. It is closed to the public for reasons of safety. Only press and volunteer clear-up teams are allowed in. Last night CNN ran a highly biased documentary about the effect of the war on Israel’s tourist industry. What about Lebanon? Tourism was the fastest growing part of this little country’s economy. Unlike Israel there is no American money to plug the gap left in people’s livelihoods. The damage to the income of the coastal towns and cities is high; the environmental damage is nothing short of a catastrophe 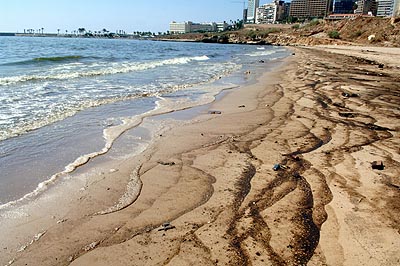 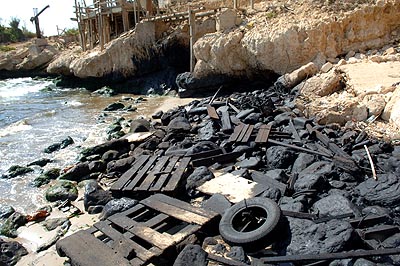 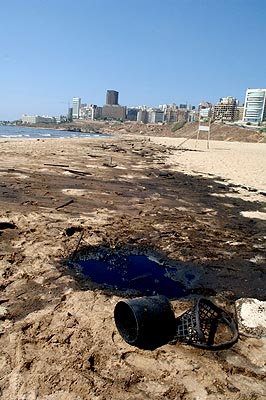 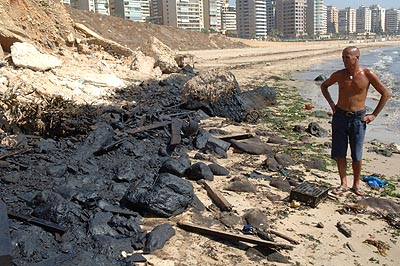 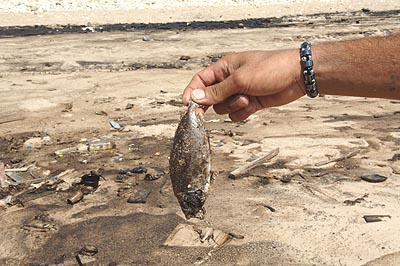 In the first few days of the war the Israelis launched an airs strike against Jnah powerstation on the coast between Sidon and Beirut. It has been targeted before. In the past the turbines and generators have been taken out. This time the fuel storage was hit and it’s contents have spilled straight into the sea. The currents flow north away from the Israeli coast and straight onto the beaches of northern Lebanon and Syria. This is an act of environmental barbarism that makes BP look like Greenpeace.

‘This from today,’ says Abdul, a local man whose usual job is to maintain the beach for holidaymakers. He is indicating a brown sludge of oil mess that has left a series of ugly tidemarks 20 metres into the beach. Behind, thick black pools of oil sit on the previously unblemished sand. These have been accumulating over the last few weeks since the disaster struck. ‘Ah we have new visitor,’ he exclaims, as further down on our tour we find a new diesel slick bubbling onto the shore.

The stench here is unreal. Imagine being in a fishmonger’s that had been without power for a week. Everyday the volunteers clear the dead marine life from the shore. It’s hard to believe that what I see before me has all arrived since yesterday. ‘In the first 12 days we cleaned 4,000 kilos of dead fish from here,’ Abdul tells me. How many more are rotting out to sea and depositing their toxins into the eco-system is unclear. This pollution has been caused by refined petroleum which on the whole causes less damage than spills of crude oil. I’m told this could have been ten times worse. Hard to imagine really.

Words and images copyright the author but availible for free to progressive media NGOs ect. Contact by email for details.