Like on every last Friday of the past few months, a picket was held yesterday at the immigration reporting centre in Solihull. The 'theme' for this month was "stop racist deportations!" Many of the 'usual faces' could not make it down (was it due to the Climate Change Camp, the newly occupied Cottage Social Centre or, perhaps, summer holidays?), so the turn-up was less than in previous month and the demo less lively. But the 'pitch' still looked crowded as bigger-than-normal numbers of asylum seekers had to sign on on that day due to the Bank Holiday on Monday. 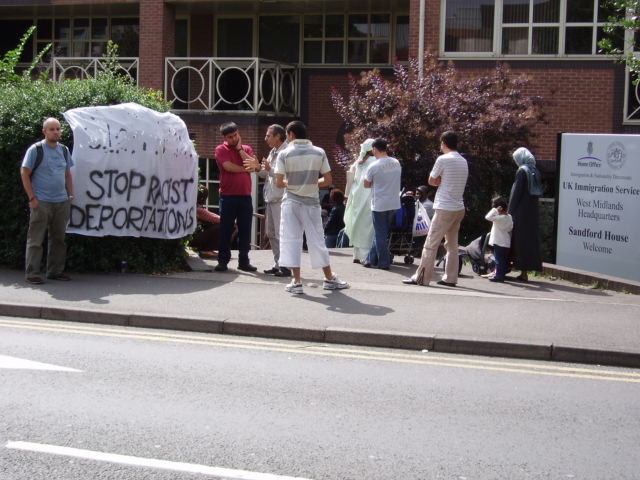 Shortly after arrival at 12noon, 2 police officers, from the police station across the street, came over and asked us "how long the demo would go on for." The only answer they got was, "As long as it takes to stop deportations!" Later on, they paid us another 'visit', apparently after Snadford House had complained that someone had gone round the back and took photos of the 'snatch vans'.

Eye witnesses (i.e. asylum seekers who go there to sign on every week) told us of seeing people being arrested there and taken away when going to sign on. According to the Home Office figures, the number of persons who were removed or departed voluntarily from the UK in 2005 was 58,215, 37 percent of which were removed as a result of 'enforcement action'. That's more than double the number of new asylum applications for the same year (25,710, excluding dependants). Many of them, apparently, get nicked at these 'reporting centres' up and down the country.

Others told us of their hardship having to travel every week all the way down to 'Solihell' from wherever they live in the West Midlands, while being given only £30-something a week by NASS to live on. One asylum seeker had just been told by an immigration officer that he was not entitled to travel expenses (one-day bus ticket), while a neighbour of his, with almost identical circumstances (who was, funnily enough, signing on that same day), had been given one.

We also had an 'interesting' conversation with a man who works there for G4S, one of the private 'security' companies contracted by the Immigration and Nationality Directorate to run reporting and detention centres. He argued that, although sometimes "cruel or out of control", it is "necessary to have such measures" (detention, deportation etc.) in order to "keep things under control and prevent others from abusing the system." Well, only last month the Chief Inspector of Prisons, Anne Owers, criticised G4S for "systematic deficits" in a report on detention centres.

Interestingly, he also informed us that some pictures of previous pickets had been published on Red Watch, a fascist website dedicated to profiling left-wing activists. So, watch out!

One of Birmingham NoBorders 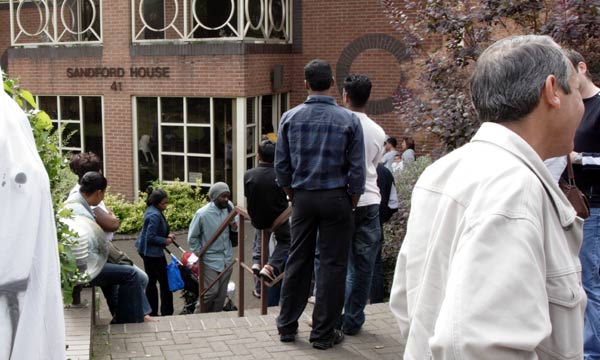 queue of asylum seekers waiting to get in to 'sign on' 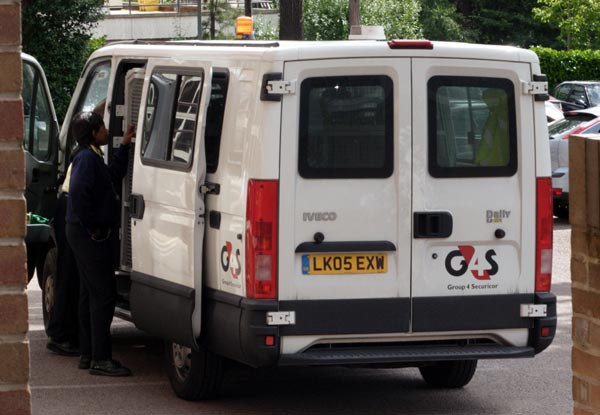 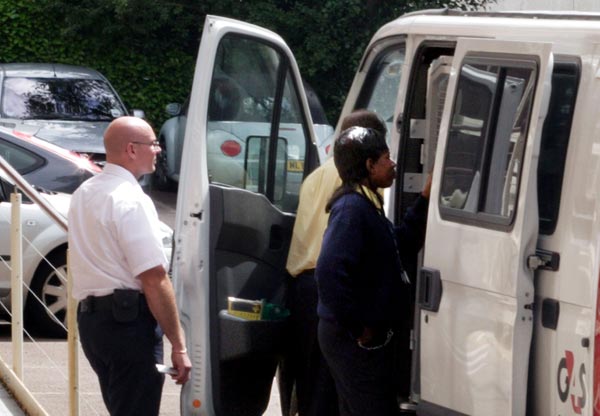 some photos from the picket.