Australians: Defend the right to strike! Aug 29 solidarity with CFMEU 107

August 29 is a national day of solidarity with the 107 construction workers on the Mandurah to Perth rail line who are facing fines of up to $28,600 each, simply for taking industrial action in defence of their union delegate. On 5 July 2006, the Howard Government launched an unprecedented attack on 107 individual Australian workers and their families. 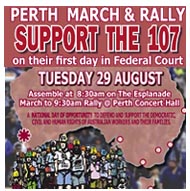 Making first punitive use of its new pro-business anti-worker industrial relations laws, imposed on Australians by abusing its absolute control of both Houses of the federal parliament, the conservative Howard government has initiated 107 prosecutions in the Federal Court, seeking to force each of the 107 to pay personal fines of up to $28,600. Howard's laws, in contravention of ILO conventions, make industrial action taken by workers or unions to protect or improve wages and working conditions unlawful.

The 107 have been singled out as Howard's first targets for persecution amongst a group of 403 construction workers that took 7 days of industrial action in February and March 2006.

They withdrew their labour when multinational joint venture partners Leighton Kumagai (LKJV) refused to reinstate sacked union representative Peter Ballard unless the workers and the union unconditionally dropped all negotiations to fix long-standing safety concerns and excessive working hours issues on the trouble-plagued New MetroRail project and accept all company-imposed changes to agreed work practices without negotiation or resistance.

For 18 months, the workers had been working from 56 to 84 hours per week for multinational joint venture Leighton Kumagai (LKJV), building a new rail line from Perth, the capital of Western Australia to the southern city of Mandurah, for the state government.

As low bidder LKJV fell farther behind on the project, it placed its workers under increasing pressure using the Howard Government's new laws. It obstructed union access to the project in an attempt to isolate their workers and onsite union and elected safety representatives. It refused to use the industrial relations commission to negotiate solutions to problems in the workplace. It demanded excessive working hours at the sacrifice of leisure time off with family. Workers were pressured to cut corners. The management of good safety practice deteriorated. When elected safety representatives spoke up, they were sacked or given first and final warnings of dismissal. LKJV launched multi-million dollar lawsuits against the union.

By the time LKJV sacked union representative Peter Ballard, the frustrated rail project workers had hit the wall. LKJV had been dousing them with fuel and then lit the match when they sacked Peter. The workers, in response, choose to take a stand on principle, and defend the workmate who had always defended them.

Now those same workers and their families face ongoing and expensive litigation to defend their civil rights. They stand to lose family homes and assets if the Government's prosecution succeeds.

Many more of the original 403 could now face the same fate. The special building industry police-like agency (ABCC), set up under Howard's new laws (BCII Act) to restrict the civil rights of building workers (only), has stated that it is continuing investigations and expects to initiate prosecutions against more workers. It has also indicated that, on behalf of employers like LKJV, it will make first unprecedented use of its powers to sue unions for millions of dollars of damages and costs over industrial action now considered unlawful. The BCII law was made retrospective and the ABCC is already investigating the CFMEU for allegedly taking industrial action that was still legal at the time.

Hundreds of protesters at a rally in Perth have been urged to unite against the Federal Government's industrial relations laws.

The protest is being held to support rail workers facing charges in the Federal Court today.

Earlier this year, 107 workers walked off the Perth to Mandurah rail line to protest against the sacking of their union representative.

Today, 60 of those workers face fines of up to $28,000 each in the Federal Court for breaching a lifetime strike ban imposed by the Industrial Relation Commission.

The ACTU is launching the next phase of its 'Your Rights at Work' campaign today. Radio ads will air across the country, highlighting who the unions say are the winners and losers under the Federal Government's new industrial relations system. The ads will run across the country, along with the current television commercials.

100 reasons why you should vote out of office, the scum federal liberal government

Maybe this is 100 reasons why the howard government should be placed in the rubbish bin of history,vote the scum out of office please scribes. The Cold 100 worker shame file dudded workers by bosses,and the scum liberal government.