Police was allowed this morning into the Climate Action Camp, after they threatened yesterday to enter by force if they were not allowed to do so. After more than 24 hours of negotiations, it was decided to allow them in and walk around the camp, whilst being escorted by legal observers and activist media. 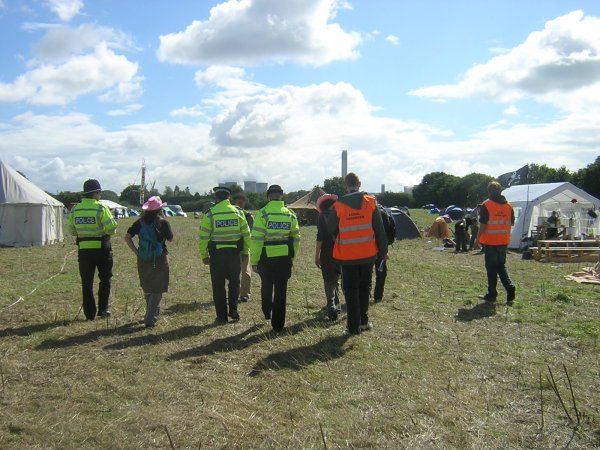 Three police men came into the camp at 11.15 in the morning, and spend half an hour walking around the main path. They were not allowed to take any pictures or film inside the camp, nor to enter any of the neighborhood areas, any of the workshops, media tents or any other camp infrastructure spaces.

Three legal observers, two activist video cameras and one photographer, followed them at all times, whilst explaining to the police the reasons to be here, and how the camp was generally structured. Police tried to get information about the plans for Thursday's actions, by stating that "if they knew what the plans were for the actions, they would be able to facilitate them". When they approached the big tripod set up for the occupation of the field, they showed concerns that "they were aware of tripods having been used in the past to cause an obstruction".

They then left the same way as they came in, and didn't cause any uproar to this morning's proceedings. Workshops continued as planned, so did the affinity groups meetings. Neighbourhoood kitchens kept cooking lunch, and the sun has come out again! No need for too much police facilitation I guess :-)