Israeli Company Blockaded For the Second Time in Bid to Gain Ruling on
Lawfulness of Trading with Settlements. 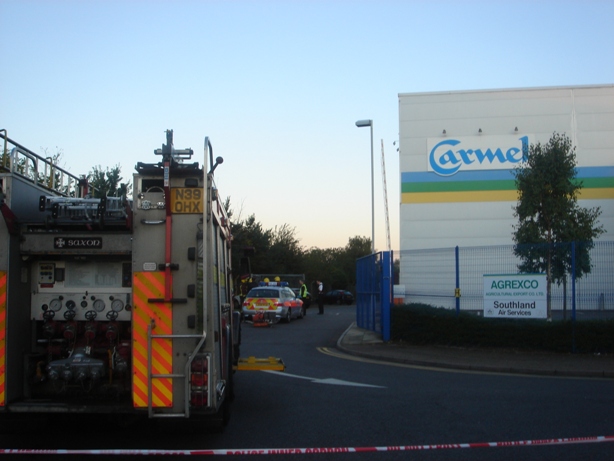 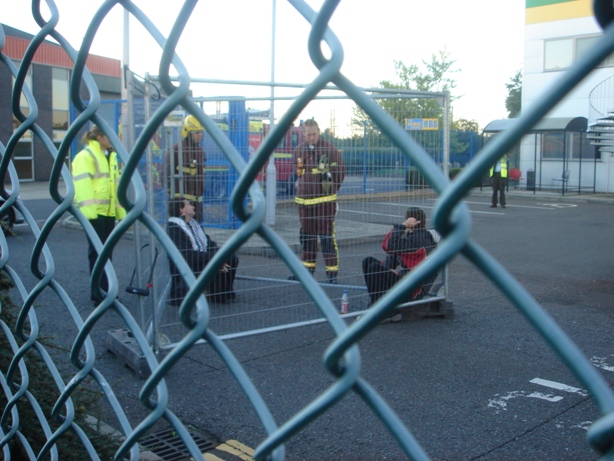 Early Wednesday morning Palestine solidarity activists blockaded the
Israeli company Carmel Agrexco’s UK headquarters. This was part of a
non-violent protest against recurrent breaches of human rights and
international law in the occupied territories of Palestine.

The action follows a legal warning letter to Carmel stating clearly why
they are in breach of the law.

Protestors used wire fencing and bicycle D-Locks in a well planned
blockade at the two entrances to the building.

Before taking part in the blockade, many of the protesters had witnessed
first hand the suffering of Palestinians under Israeli military
occupation.

This follows on from an action of 11th November 2004, when seven
Palestine-Solidarity protesters from London and Brighton were arrested
after taking part in a non-violent blockade outside the same company.

Last September a Judge ruled that Agrexco (UK) must prove that their
business is lawful. The acquittal of the seven activists before they were
able to present their defence meant that the court did not have to rule on
the legalityof Agrexco-Carmel’s involvement in the supply of produce from
illegal settlements in the occupied territories.

Today’s blockade aims to draw attention to this company’s complicity, in
murder, theft and damage of occupied land, collective punishment,
apartheid and ethnic cleansing, and other breaches of International Law.

Report on Carmel’s Involvemnt in the Jordan Valley:


One non blockader arrested has been de-arrested and released.

No-one remains under arrest any longer.

Police are saying to people on the scene that they will not be charging anyone with any offence today.

Carmel-Agrexco employees have closed and locked their own warehouse gates with blockaders inside-completely shutting down the facility. Agrexco's main distibution centre in the UK.

There appears to have been communication from the company to the police that they do not want to face another court case.

In January, seven blockaders from the Nov 2004 action were acquitted after it was found that their blockade had been on someone elses land. Amos Orr, General Manager of Agrexco (UK) had been summoned as a witness to face cross-examination on Agrexcos complicity in illegal occupation of Palestine.If the blockaders had not be acquitted , they would have been able to put forward a defence based on international law, that Agrexco's business is unlawful.

Today the blockaders had made sure they were well inside the gates in order to avoid this outcome, and be able to put forward the international law argument.

But Agrexco appear to have asked the police not to arrest or charge anyone to avoid the court case and are simply waiting for the protesters to go away.

Support requested by the blockaders

The blockade has been going since early this morning. The police are very reluctant to arrest anyone
Aggrexco Carmel are a state owned Israeli company that import produce from settlements. As these settlements are illegally occupying Palestinian land under international law, a court case about the illegality of the blockade would be very embarassing for both the Israeli and British Governments.

To get to the blockade get the train to Hayes. Aggrexco Carmel are on Swallowfield Way.

(I was phoned and asked to make sure that this text was on indymedia and that people should go if they can.)

one person has been arrested for alleged aggravated trespass but this was not one of the locked on blockaders.


Meanwhile the Israeli govt are refusing UN requests to lift their blockade of Lebanon.

No arrests of Israeli Govt officials have been reported.

Nice picture on BBC website of Kofi Annan shaking hands and smiling with an Israeli blockader and war criminal.

On behalf of Palestinians and supporters I would like to thank the British activists
who have been increasingly active recently in supporting Palestine and Lebanon and
are stepping up their campaign against the Occupation regime and those complicit
with it, such as Carmel Agrexco, the largest supplier of settlement produce to the
UK and Europe. Success for Agrexco is a tragedy for the Palestinians as it means
more theft of land and water resources, especially in the Jordan Valley. The
situation in the Jordan Valley is getting worse on a daliy basis. New greenhouses
for companies such as Agrexco, Arava and Ada are being built and soldiers make it
impossible for farmers to access their land in the Valley.

Meanwhile settlers are given all kinds of state support.

Today's Agrexco action offers support and hope for Palestinians as it shows that
there are people trying to reduce the tragedy being inflicted on them.