Alarm in Washington over deepening disaster in Afghanistan

Afghan officials told VOA that there could now be as many as 40,000 guerillas fighting against the occupation forces and the Afghan army. Extensive US and Pakistani military operations have failed to prevent insurgent groups using the mountainous regions along the Afghan-Pakistan border as a safe haven to rest, resupply, train and recruit. Large areas of the predominantly ethnic Pashtun provinces of southern and eastern Afghanistan are outside the Kabul government’s authority and regularly fall under the sway of Taliban forces. 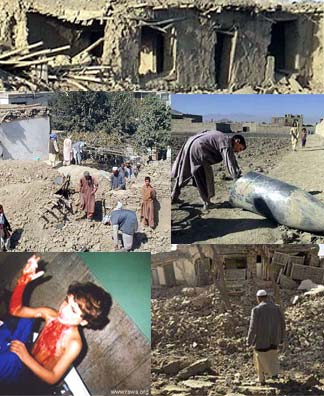 The New York Times vented the concern in US ruling circles over the deteriorating state of affairs in Afghanistan with a lengthy article on August 23 and an editorial the following day, entitled “Losing Afghanistan”. Close to five years since the country was invaded and occupied in the name of the “war on terror,” the newspaper made the bleak assessment that “there is no victory in the war for Afghanistan, due in significant measure to the Bush administration’s reckless haste to move on to Iraq and shortsighted stinting on economic reconstruction”.

The primary target of the editorial’s wrath, however, was not Bush and his administration, but rather the US puppet government in Kabul headed by President Hamid Karzai. It criticised Karzai, who won a contrived election in October 2004, for failing to bring “security, economic revival or effective governance” and thereby leaving his government “vulnerable to complaints about blatant corruption, the pervasive power of warlords and drug lords, and escalating military pressure from a revived and resupplied Taliban”.

The open condemnation of Karzai may indicate US moves to oust him. In her August 23 article, Times correspondent Carlotta Gall reported that, “Afghans and diplomats are speculating about who might replace him”. Opposition politician Abdul Latif Pedram stated: “There has never been so much corruption in the country. We have a mafia economy and a drug economy.”

Yet, Karzai’s failures are those of the US-led occupation of the country. Karzai, an exile who lacked any significant social base in Afghanistan, was installed as president in 2002 immediately after the US invasion. His regime has always been completely dependent on Washington—economically, politically and militarily. Outside the capital, its influence rests on an unreliable patchwork of regional warlords, tribal leaders and militia commanders. Any replacement would confront the same intractable political and social problems.

The US-led forces are fighting against an entrenched and expanding guerilla war. The Voice of America (VOA) reported last week: “Throughout the country, every type of attack is on the rise—from roadside bombs and suicide attacks, to massive raids on government outposts involving up to several hundred well-armed insurgents”. While some of the guerillas are members of the Taliban Islamic movement, there are indications that local tribal leaders or drug lords are conducting the armed resistance in many areas.

Afghan officials told VOA that there could now be as many as 40,000 guerillas fighting against the occupation forces and the Afghan army. Extensive US and Pakistani military operations have failed to prevent insurgent groups using the mountainous regions along the Afghan-Pakistan border as a safe haven to rest, resupply, train and recruit. Large areas of the predominantly ethnic Pashtun provinces of southern and eastern Afghanistan are outside the Kabul government’s authority and regularly fall under the sway of Taliban forces.

The NATO force tasked since July 31 with imposing occupation control over the southern provinces is meeting with bitter opposition. NATO commander, Lieutenant General David Richards, told the BBC this month that the 4,000 British troops in Helmand province were engaged in a type of “persistent, low-level dirty fighting” that the British military had not confronted since the Korean War or World War II. The 2,300 Canadian troops in Kandahar province have lost eight dead and dozens wounded this month alone.

So far, 27 American and allied troops have been killed in August, the highest monthly figure this year in Afghanistan and one of the highest since the occupation began. The number of deaths could climb even further in September. The 1,400 Dutch and 400 Australian troops currently moving into Uruzgan province are expected to suffer casualties, while the actions of the occupation forces are further inflaming hostility toward the foreign forces.

In the most recent incidents, eight people, including a 10-year-old boy, were gunned down during a US raid on a house that allegedly belonged to an Al Qaeda adherent. Karzai’s government has ordered an investigation into Afghan police claims that those killed were innocent locals. On Saturday, Canadian troops killed and wounded Afghan police who were approaching a checkpoint. Just 45 minutes later, they opened fire on two other police riding a motorcycle. The police have rejected the Canadian claims that they were not wearing uniforms.

Outrage over routine searches, detention and killing of civilians has contributed to the growth of the insurgency and the revival of the Taliban. This had been compounded by bitterness over the continuing economic and social disaster produced by the US-led occupation. Despite promises of billions of dollars in aid, unemployment and poverty remain endemic and essential services dysfunctional. Three million people depend on food aid to avoid starvation.

In the capital Kabul, many residents regularly face electricity blackouts for days at a time. At best, they receive five hours per day. Work has barely begun on plans to construct new power plants and transmit electricity from Central Asia. Wealthier layers, however, many of whom work for the occupation forces, receive continuous power.

The Washington Post reported early this month: “Residents of Karte Nau, one of the city’s poorest and darkest districts, live with a double insult. A row of new power poles and lines runs across their neighbourhood, for which some families have paid up to $250 for a connection, but none has received electricity yet. When they peer down from their huts at night, they see a row of ornate new mansions beside the main boulevard, lit up like a holiday party.”

In the rural areas of southern Afghanistan, next to nothing has been done to alleviate the misery of people who have endured decades of war. Lacking any alternative, tens of thousands of small farmers have turned back to growing opium, encouraged by local warlords who reemerged after the US ousted the Taliban regime. As much as 90 percent of the world’s heroin supply now originates in Afghanistan.

The drug trade takes place with the complicity of Afghan officials, troops and police working with the US forces, who are notorious for their corruption and brutality. Marvin Weinbaum, a former analyst on Afghanistan for the US State Department, told Agence France Presse last week: “Many believe that there is drug involvement right up to provincial officials, governors and even to cabinet members, but Karzai has no stomach to confront this problem because his own political survival may be threatened.”

Opium is believed to be generating significant resources for Taliban fighters and other anti-US militias, who levy taxes in exchange for not disrupting the trade. Southern Afghanistan is estimated to have more than 180,000 hectares planted with opium poppies, producing over 4,000 tonnes of opium worth an estimated $US2.7 billion. Taliban fighters are reportedly using drug money to purchase better equipment and weapons.

Within this context, the conclusion of the New York Times editorial on August 24 has chilling implications. It declared: “Americans are coming to see the war in Iraq as something apart from the war against 9/11-style terrorism—and a distraction from it. The war in Afghanistan has always been an essential part of that larger struggle. That makes it a war that America cannot afford to lose.”

If “winning” the war in Afghanistan is defined as establishing occupation authority over the entire country, it necessarily implies a massive escalation of the violence against the Afghan people.

Government Wants 2,600 extra troops - is conscription on the horizon?

The Howard government has announced a $10 billion plan over 11 years to boost the armed forces by an extra 2,600 soldiers. Greens Senator Kerry Nettle attacked the plan saying "The answer is not to get a bigger army but to pull out of Iraq and Afghanistan and rethink the ADF's involvement in supporting US foreign policy adventures,". The rationale for this increase is to prepare the defence force for intervention in more failing states in the asia/pacific region. The question arises with the amount of military nationalism occurring recently, are we being prepared for the reintroduction of conscription?