Yorkshire today is reporting that power lines in West Yorkshire have been cut over night and police and attempting to make a connection between the the incident, a blockade at Hartlepool Power Plant and the Camp for Climate action...

http://www.yorkshiretoday.co.uk/ViewArticle2.aspx?SectionID=55&ArticleID=1728710
With the headline 'Power protest spreads as lines are cut', Brian Dooks reports that police were investigating into the cutting down of power lines at Fryston, near Castleford in West Yorkshire. The Deputy Chief Constable of North Yorkshire Police, Ian McPherson, said "It is certainly a remarkable coincidence that there should be three events within 24 hours all involving the power supply" although he admitted there was no apparent evidence to link the damage with the Camp for Climate Action at Drax or the anti-nuclear protest at Hartlepool.

Mr McPherson was also reported as saying, "Demonstrators have the right to make their point publicly but within the law. But no one has right to cause damage, spread fear or break the law in support of their argument. We will facilitate lawful and peaceful protest, but criminality or disorder will be dealt with swiftly and firmly."

further reporting on this alledged incident 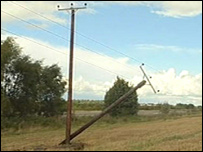 here is the picture taken from bbc news online and a link to the article, which leads on the section 60 stop and searches at the camp:

Campaigners protesting at Britain's biggest coal-fired power station are being stopped and searched by police as they enter and leave the campsite.

The move comes after police issued a warning to campaigners when power lines were cut down at Fryston, near Castleford, West Yorkshire, on Tuesday.

About 500 people have camped near Drax in Selby, North Yorkshire, to protest over carbon dioxide emissions.

Police found no evidence of a link between the damage and the protest.

But campaigners were warned not to break the law.

A spokeswoman for event organisers, Camp for Climate Action, said she could not comment on the damage.

But, she said, campaigners objected to being searched by police.

She said: "We think it is unreasonable. People have come here to talk about climate change, and to educate themselves with workshops.

"Some people are choosing not to leave the site as a result of this."

Campaigners have also been protesting outside Hartlepool nuclear power station. Six people who chained themselves to the power station's gates were arrested on Tuesday.

North Yorkshire Police Deputy Chief Constable Ian McPherson said: "It's certainly a co-incidence that there should be three events within 24 hours all involving the power supply.

"I would be very disappointed if it turned out that the demonstrators at the climate camp were involved in any illegal action."

Mr McPherson said while the force would facilitate a lawful and peaceful protest it would deal "firmly and swiftly" with anyone who broke the law.

Police have been drafted in from across Yorkshire in case there is any trouble.

The protesters, who are camping on land next to Barlow Common nature reserve, are planning a day of "mass action" on Thursday in an attempt to shut down the site.

The power station has secured an injunction prohibiting any trespassing on the site and restricting the use of a nearby footpath.

Drax said it wanted to ensure the protesters did not force the station to close or put their own safety at risk.

It had no objection to "peaceful and lawful demonstration" but did not want protesters exposed to the dangers and hazards "inherent to our highly complex industrial site".

Please don't do this

I don't think any there's any connection between those attending the camp and this incident, although maybe someone felt inspired by real media or even indymedia reports of the camp to commit this act of mindless damage.

The lines pictured are low voltage lines (they will still bite if you come into contact with them) which supply one or two houses. Those people will be without power for a day or so, maybe prevented from working but there will be no effect on Drax whatsoever. Rural areas are frequently regarded as the scrag end of the electricity network and are always last to be reconnected after storm damage.

The lines connecting Drax to the grid are a different matter. If you mess with them, you will die. Even on a dry day 400kV can jump several metres. Even if you get away, leaving electricity lines in a dangerous state endangers others, especially children.

National Grid infrastructure is very well documented in the public domain and there is no way that the Grid can protect every pylon. There is redundancy, but it would not take a genius to work out where to attack to defeat it and black out a major urban area. Major substation transformers are not 'off the shelf items' and take time to replace.

That the Grid has never suffered a total outage (known as 'blackstart') and nowhere has ever suffered prolonged outage suggests that maybe the terrorist threat is not quite what it is made out to be.

Play safe. Away from powerlines.