On two occaisions during today's day of action against Drax power station, a farmer drove his tractor striaght at groups of protesters. The first, in a field being crossed by white suited protesters and the samba band, caused people to run out of the way before the police shouted at the man to desist. The second, against the Kid's Block protest at the main gate, was prevented by police, who dragged the man from the cab and arrested him. Footage shows that it was the same farmer on both occaisions.
An eyewitness to the first incident reports, "as we were marching along the side of one of many fields between the camp and the perimeter fence, a tractor appeared and raced across the fields towards us. As he drew near, it became obvious that he did not intend to stop. He shouted abuse, then turned his tractor round for a second shot. At this point he was driving straight towards the column of protestes, which split in two around him. If anyone had failed to realise in time, it could have been lethal.

"When he stopped the second time to continue his yelling, the police attempted to calm him down. He claimed that there was some agreement between the police and himself that we would not be allowed on his fields."

Another eyewitness, present at the second incident, reports: "The tractor then appeared at the main gate of the power station, and rattled towards the childrens block, byepassing the police lines, on to the pavement and tried to head straight towards families sat round having their picnic. The police managed to stop the tractor by jumping into the cab. They then disarmed the farmer who was carrying a hockey stick. The police continued to punch the farmer and restrain him whilst pulling him out of the cab. Once on the ground, covered in blood, the police arrested him. This is the same famer who's given land to the police for their vehicles, so perhaps he may get off with a caution??"

These acts were without doubt, attempted murder. You can not drive a vehicle directly into a group of people without being aware that the likely result of successfully hitting somebody would be to kill them. The police arrested this man but interestingly they did not cuff him. He was taken away in an ambulance with police refering to him by his first name! Even more incrediably, the hockey stick which was found in his possession, was simply returned to the tractor rather than being taken as evidence. Clearly the hockey stick was an offensive weapon and the fact that it was simply placed back in the tractor is an outrageous insult to the protesters who have had forks seized from them during searches with police claiming that they could be used as weapons! As yet, nobodies knows what the farmer was arrested for and whether he has been charged. However, we do know that the police are on first name terms with both the farmer and his dog and that they have been using this farmers fields to park their vehicles! Will justice be done in this case? We'll wait and see.

With perhaps 400 people taking part in todays protests, the police have proved themselves totally incapable on all levels. With eight forces (plus the British Transport Police) mobilised to prevent disruption to the power stations around the camp, it is incrediable that not only have dozens managed to enter Drax, but also a homicidal farmer has twice been allowed to threaten the lives of people the police claim to be protecting.

just to clarify the above comment. yes the farmer should get a serious charge for trying to drive into people. He wouldn't stop when the police tried to wave him down. they did take photos of the hockey stick though and wouldn't have been able to cuff him due to the extensive bandage on one of his arms. i think he took a bit of a battering on the short journey from his cab to the ground

PA Picture of farmer pulled from cab (aka protestor!! acc to PA)

"Police drag protestor from his tractor during the power station protest"

PA / MPICS have four pics of this incident - two of the tractor, one of the driver surrounded by police and medic, and one of the JCB driver being pulled from his cab too.

The strapline's are correct, as opposed to the one referenced in the 24dash article:

"A local farmer is pulled from his tractor after appearing to attempt to force his way through a demonstration outside Drax power station in North Yorkshire."

"The driver of a large digger, which appeared to be attempting to get through a road blocked by police vehicles and demonstrators, outside Drax power station in North Yorkshire, is taken from his cab by police."

In total they have 18 pics of the protest, many of which have of course been used in the main media coverage of the day of action. 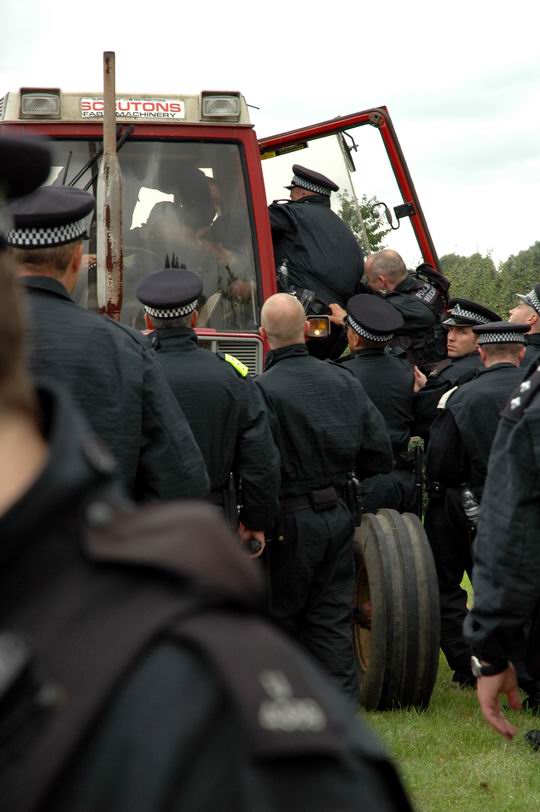 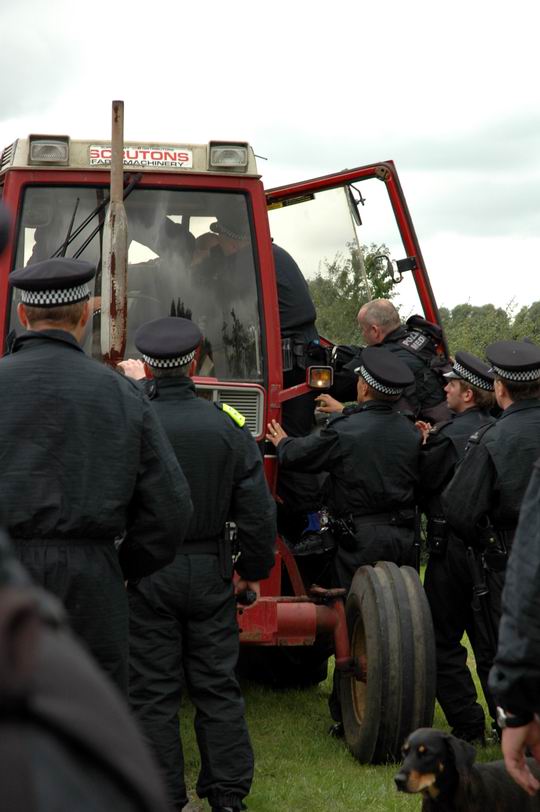 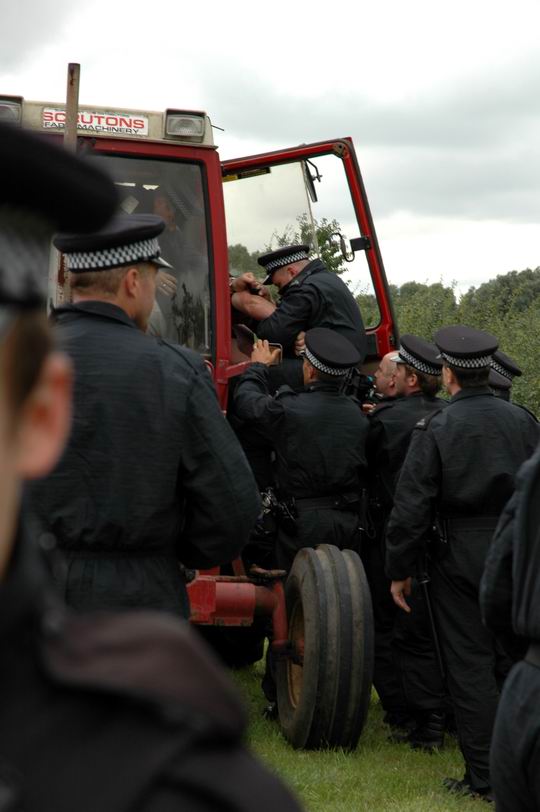 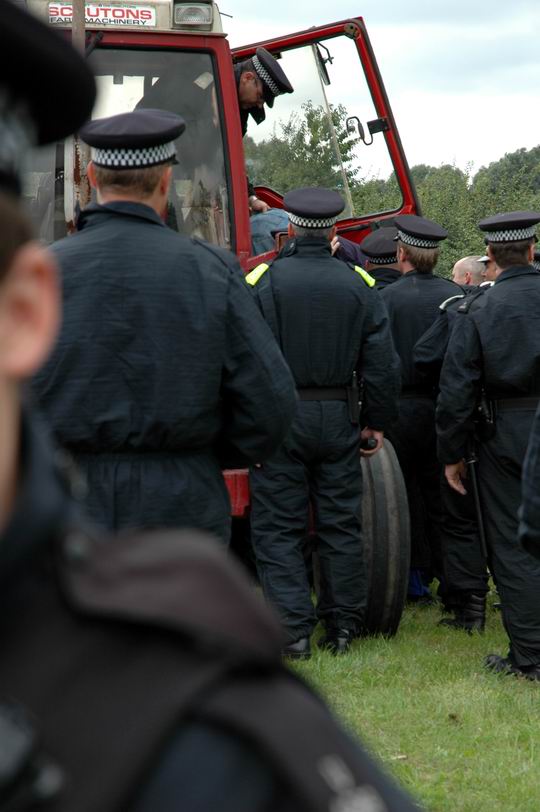 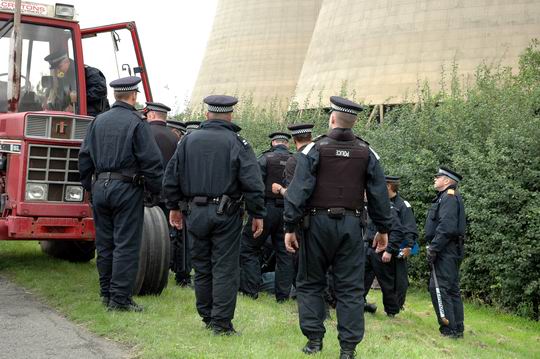 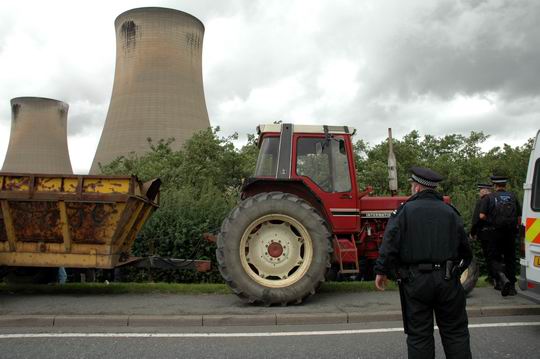 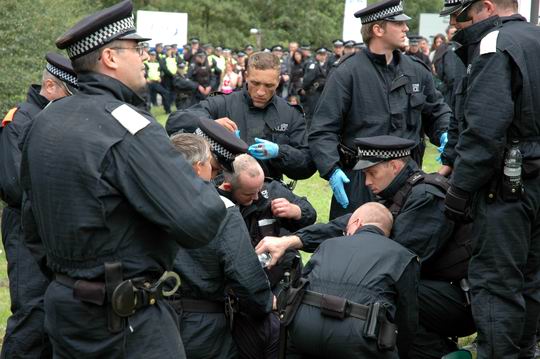 The farmer is 'attended' to. 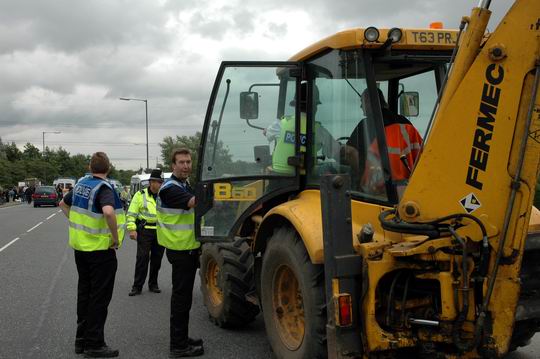 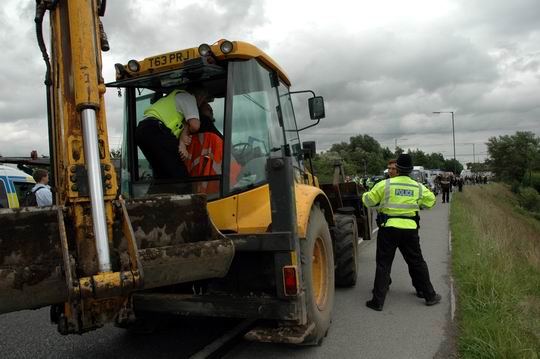 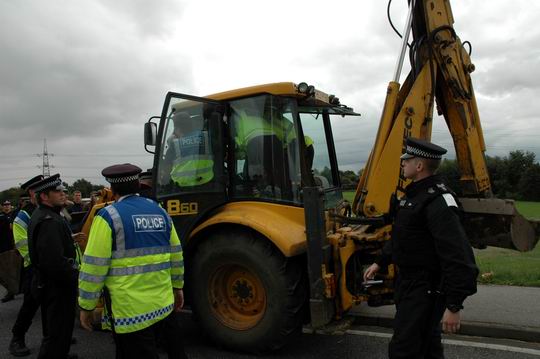 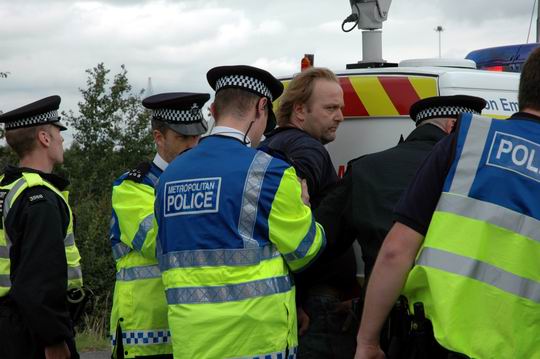 Same farmer! Bit of a loose canon this one. 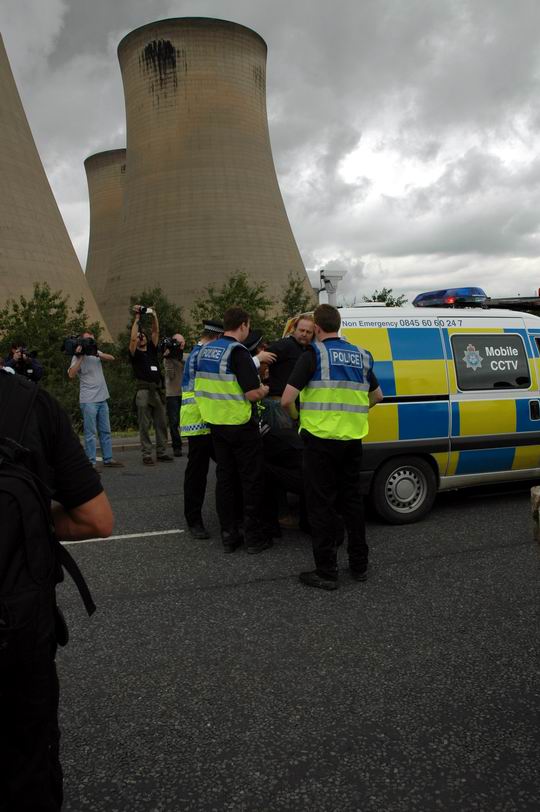 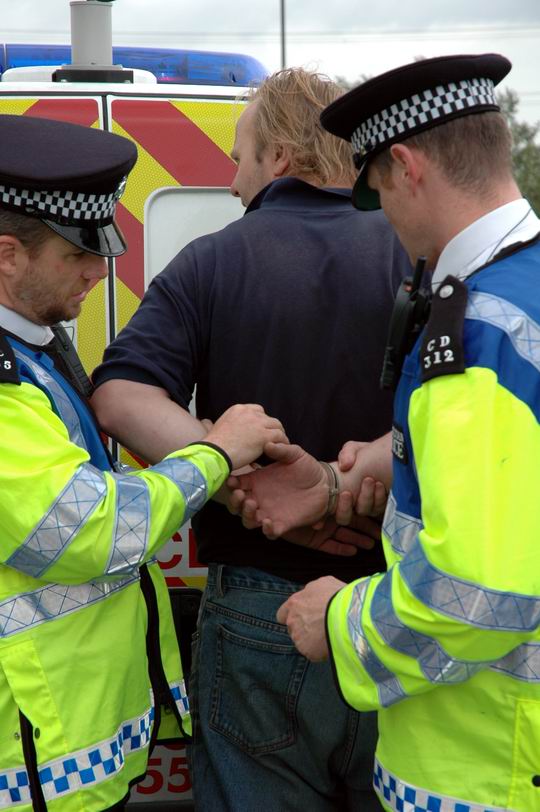 Steel cuffs...looking quite tight too.

a further series of photos of the mad farmers antics: