Inaccuracies from Reuters in their reporting. Article subsequently removed from their web site. 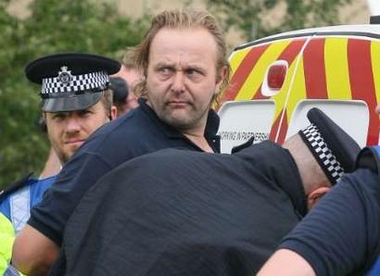 "A protestor is led away by police during a demonstration organised by The Camp for Climate Action group at the Drax power station near Selby in northern England August 31, 2006. Twenty eight people were arrested, mostly for possession of weapons or criminal damage, as some 600 protesters staged a demonstration at Britain's biggest power station on Thursday, police said. REUTERS/Nigel Roddis (BRITAIN)"

The person in the photo is clearly one of the two farmers who drove tractors at the protestors and police. This being I believe the farmer's son who drove the JCB. Also the arrests were mainly for trespass and not at all for possession of weapons nor criminal damage.

A clear example of the press failing completely to get their facts straight.

same mistake made by a few