Then the concluding paragraph must use the words "injustice", "so-called war on terror", "racism", "anti-muslim prejudice" and other such buzz words as many times as possible. 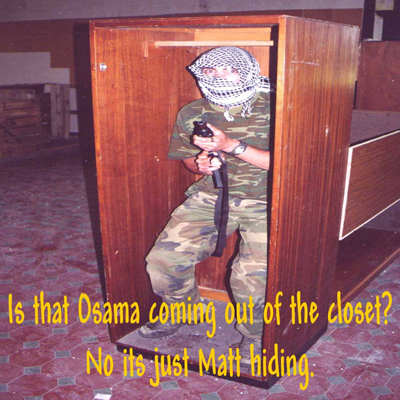 After the so-called liquid bomb plot and the public embarresment the British police have faced, another group of muslims has been targeted.

In what can be only described as a case of victimisation 14 muslims were arrested on trumped up "terrorism" charges.

The group of Muslims from south and east London were enjoying a meal at a local chinese restraunt when armed police brutally arrested/unlawfully detained them.

The arrests in South London have also worried civil libertarians....

Local politicians have responded with some skepticism at the arrests.
INSERT RESPONSE FROM GEORGE GALLOWAY

Then the concluding paragraph must use the words "injustice", "so-called war on terror", "racism", "anti-muslim prejudice" and other such buzz words as many times as possible.

Oh! And add a good photo:

Lots more Australians have become aware that feral tyranny-general philip duddock is a terrorist and still believe they're vulnerable to his terrorist attacks.

Liberty City Terror Scare that Came on Eve of Historical Senate Debate on Withdrawing Troops from Iraq Was a Bush Administration Entrapment Set Up to be Used When a Media Diversion Was Needed. It was a Stalin Style "Show Arrest," Timed to Distract Americans from the Failed Fiasco in Iraq.

British police are questioning 14 men arrested over the alleged training and recruitment of extremists in the country's latest high-profile anti-terrorism raid.

British police say they have arrested 16 men in two separate anti-terrorism operations just three weeks after uncovering a suspected plot to bring down US-bound airliners over the Atlantic.

"Our philosophy here is that we try to identify plots in the earliest stages possible, because we don't know what we don't know about a terrorist plot," he said. It is dangerous to evaluate in advance that "this is a really dangerous group; this is not a dangerous group," Alberto R. Gonzales.

The Four Pillars of Wisdom for 911 Truth

A former Army intelligence and public affairs officer looks at four key principles that should guide the 911 Truth Movement on its road to becoming a majority movement. The opportunities for 911 truth have never been greater -- nor have the perils.

And you don't need The UN to impose sanctions

The ricin scare was used as part of Washington and London’s justification for invading Iraq. But when the case came to trial in April 2005, it turned out that there was never any ricin, just castor oil, cherry stones and apple seeds. The positive test was faulty and subsequent negative results did not come to light for more than one year due to “errors.” Eight people were cleared of all charges (a ninth was convicted on a separate charge).

It's best to fly first class and order Champagne. The bucket full of ice water, which the airline ought to supply, might possibly be adequate - especially if you have those cold gel-packs handy to supplement the ice, and the Styrofoam chiller handy for insulation - to get you through the cookery without starting a fire in the lavvie.

This is a very good 1 hour radio shown on the plane terror threat.

BRIEFING revealing the truth and reality behind the massive illusions and deceptions of the Traitor Cabal.

What the US & UK war profiteers and fear mongers don't want you to know...

For those who still believe in the "Official" story about 9/11, and those who think that the Earth is still flat, visit:

Please comment on what you think about these websites & movies...

After five years of the War, on Terror, Iraq, Afghanistan and Israel’s joint and assisted slaughter, Millions of civilians have died in recent times.

However In the last six years western civilian deaths due to Terrorism is at a miserable 4500, 911, Madrid, Bali , London, Egypt Saudi and Indonesia, a lousy 4500 Max!.

However, regardless of the no threat, low western casualty figure Muslims have become a greater threat to Australians than American right wing Christians and their generic hypocritical gang of fellow goof ball psycho’s

The present day situation Makes Australians look like idiots to be so obviously fooled, But then I guess some people still think the crusades were about the spread of Christianity.