brian haw appeared at marylebone magistrates court on tuesday afternoon to ask for an adjournment of his socpa trial while a judicial review investigates the lawfulness of police actions. the end of the hearing descended into farce as superintendent terry ran from the court and called for two units of back-up after brian accused him publicly of his involvement in harrasment and intimidation of an innocent woman. 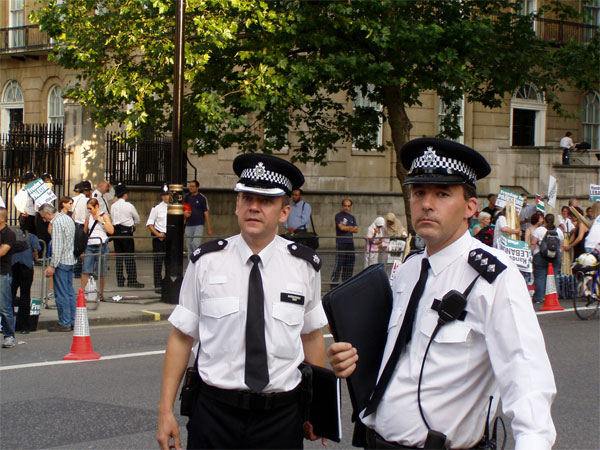 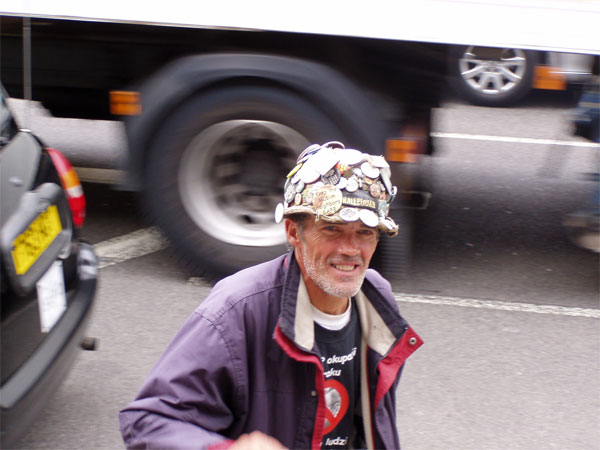 brian arriving at the court

the police, namely chief inspector robinson and superintendent terry, sat in the court looking like a pair of naughty conspiratorial schoolboys, waiting for brian who was late because he had been attending the dubious trial of barbara tucker reported elsewhere.

brian's defence barrister outlined the request for adjournment as follows. brian is due to stand trial on the 12th september for breaking conditions imposed by police on his parliament square protest after the high court overturned a previous ruling against the government and brought his demonstration under the control of the serious organised crime and police act 2005 (socpa). although there are no real issues over the facts of the case, the defence are challenging on two grounds the legality of the conditions which had been imposed by superintendent terry. firstly, whether it was correct for the commissioner to delegate responsibility to terry of framing the conditions, and secondly, whether the conditions themselves (ten of them) were disproportionate and so a restriction on brian's human rights of free expression and freedom of assembly. the defence argued that the high court was the most suitable place for these issues to be heard for several reasons. firstly, the matter is quite complex and of great public interest as the socpa legislation is quite new and untested. also, that a high court judicial review can be more wide-ranging, especially in the matter of the conditions imposed. a magistrates hearing would only cover the three conditions that brian is accused of breaching, whereas the high court would be able to look at the legality of all ten conditions in context. finally, administratively, should brian be found guilty in a magistrates hearing it is quite likely that the points of law would be challenged in an appeal later anyway, so it might be better to cut to the chase. if a judicial review found that the police had acted lawfully, then an adjourned magistrates trial would be much more swift afterwards as everyone would have a clear idea of how they stood legally and only the facts would need to be proven.

both the defence and the prosecution referred to a test case ' boddington v british transport police' which was a case where the legality of 'no smoking' signs on a train were challenged by a smoker who had been charged under new bye-laws. the prosecution quoted lord irvine's ruling that 'citizens should be able to challenge laws in any court' and suggested that it was not correct to belittle the power of a magistrate's court. the defence pointed to other parts of the ruling that implied that this only meant that a citizen should certainly not be precluded from raising legal challenges in lower courts, but this didn't mean that the lower courts were the MOST appropriate.

the prosecution made much of the fact that brian's lawyers had left the application for a judicial review very late in the day, but the defence pointed out that since brian has adhered to the conditions and not breached them in the months since the socpa ruling, and since the simple facts of the case were not a matter of great dispute, any delay in bringing the trial would not be of particular benefit or prejudice to either side.

the judge was clearly not happy that the judicial review application had been finalised so late in the day, and as it was still not clear whether the application would be accepted, she was reluctant to postpone the trial set for next week. on the other hand, she seemed swayed by the defence arguments in principle, and after a short adjournment for her to consider, she came back into the court and said that if the defence could get a commitment before friday evening from the high court to proceed with the review, then she would reconsider, but otherwise the trial date should stand.

even if the trial does start next week, and at the moment that seems possible, there may be a further technical reason for its adjournment on that day. the defence has applied for a list of 17 witnesses, and although the prosecution has questioned the relevance of many of these, and the judge has warned that she would take a very dim view of any irrelevant testimony, if the defence stick to their guns on this there will not be enough court time set aside for a full hearing. all sides agreed a part hearing was unappealing, and so an adjournment may be the only course.

brian himself had no official platform at this trial, it being an afternoon of legal argument, but faced by superintendent terry in court he could not contain himself and asked to address the magistrate at the end of the two-hour hearing. he stood up and asked how a fair trial could be possible when this man (terry) had stolen from him his evidence, various legal papers, confidential correspondence, and his personal possessions. the magistrate ruled brian out of order and left the court, but he carried on, pointing his finger at robinson and terry and, in reference to charing cross police's continued harrassment, intimidation and assault of anti-war campaigner barbara tucker, he accused them of being liars, corrupt officers, thieves and finally torturers. as members of the public gallery shouted out 'sack him, sack him', superintendent terry fled to the front of the court buildings and radioed urgently for two police units. the public gallery was cleared, brian calmed down, and he left the court building without further commotion, but as a few supporters spoke on the steps, and brian talked with his barrister, they were watched by several police while more of terry's gang hid round the corner.