When children behind the wire start to call Yarl's Wood IRC 'home' it clearly shows that their perception of living in Yarl's Wood, is that they have lived there a long time. 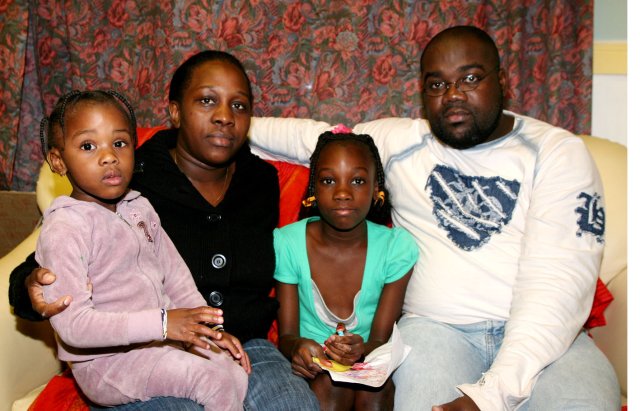 Molly Ssebatta aged 6 spent six weeks in detention with her mother. Three attempts to remove them failed, on getting back to Yarl's Wood the third time Molly said to her mum 'We are home" The resident Social worker wrote in the Family Welfare assessment weekly Review, that Molly continues to show, signs of increasing institutionalization. Molly's mother said we were released after the social worker's intervention.

Sisters Annarose, Joanne and their parents Judith and Juslain were released on the 3rd August 2006, from Yarl's Wood IRC. They went back to their home in Dudley where they had been snatched from; only to find the house had been boarded up and found out they were no longer tenants. The Refugee Council found them emergency accommodation in Birmingham, which was one room.

When I first spoke to Judith after their release she said to me, can you hear how happy the children are "free at Last" Judith, said even though the four of us are still living in one room since our release "it is better than that Prison Yarl's Wood"? Annarose the eldest is still suffering because of her experiences of detention, I regularly meet with the family, and we have to be careful about mentioning Home Office and Yarl's Wood as she becomes very distressed.

Joanne is just a toddler a mere two and half years old, what is most disturbing is that every time she sees a Policeman, Traffic Warden or anyone in security uniform or the word search is mentioned she lifts up her arms to be body searched as this was the norm at Yarl's Wood, where body searches on the girl child and mothers are carried out by both male and female officers.

Another thing is that when she picks up the phone she says 244, which was the family's pager and ID number to obtain meals and other services. Yarl's Wood they have a pager system for receiving phone calls, another thing Joan does regularly is when she hears a phone ring she shouts out 244 as that was their pager and room number. I have witnessed some of Joanne's behaviour and it's enough to make me weep. How can such things happen in what is supposed to be a civilized society?

I have just been speaking to Judith and Juslain who have told me they are being dispersed again, this time to Cardiff. For Annarose to start another school she needs her birth certificate the family have gone to Anna rose's old school on the hope of getting a copy.

They were on the bus to Dudley to try and get Annarose's birth certificate as no school will accept her without it, can we all imagine what it must be like to a 9 year old who loved her school, teacher and friends to go back to a school she can never again attend.

Just how many times can Home Office/NASS displace one family in just four months all in the name of proving that Britain is no longer a soft touch?

There are many difficulties these Children face upon release not least that they might not be able to go back to the communities they came from. They loose their school friends, their friends in the community, re-registering with a Gp has proved to be extremely difficult for many of the children. Depending on how many times they have been detained, they may have to start rebuilding their lives again.

Judith said when Annarose heard that they were going to Dudley, she was so excited as she thought she would be going back to her old school to be with her friends, when mom told her that it was only to fetch her birth certificate, she said to her mother, "please let me go back to my old school".

"Immigration policy should not be akin to the systematic destruction of children and their families. In this particular case, it is harrowing to hear about the trauma these children are displaying as a result of their experiences in detention and the constant disruption caused to their lives by inhumane procedures which seem to serve no useful purpose other than subjecting human beings to yet even more suffering. This abuse of children and families must end and be replaced by something that resembles both sanity and humanity." Nushra Mapstone, Professional Officer England, British Association of Social Workers (Basw)

Most of the children that I have been writing about and have left detention, have left Yarl's Wood with skin conditions, parents are quite clear that their children were not infected before detention.


Editors note: The information in this message was compiled from phone conversations with the parents of detained children, who have read and agreed the contents.