Just a tiny example how the IsraHell' dirty tactics work. 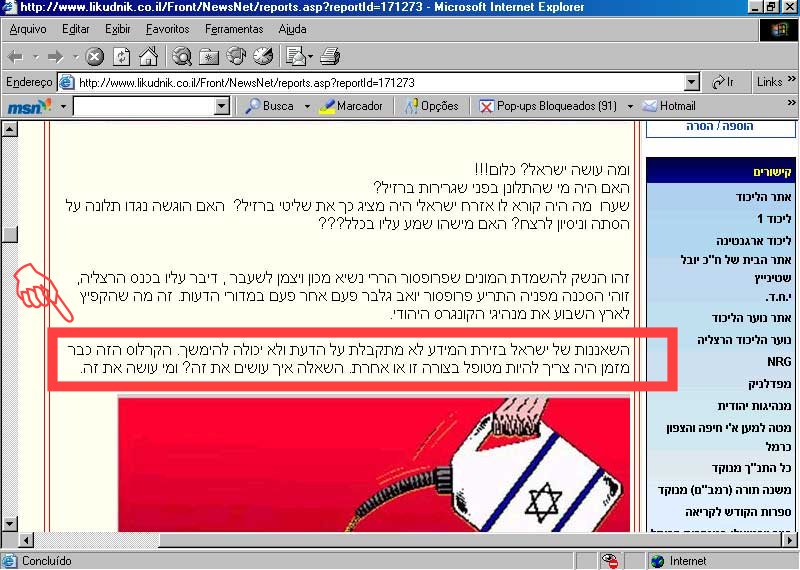 Now guess what! I'm being threatened by Likud, a right wing party in Israel (former party of Sabra and Shatila butcher Ariel Sharon). In their page,

http://www.likudnik.co.il/Front/NewsNet/reports.asp?reportId=171273, my picture and some of my cartoons are shown. Along the same old name-calling (Nazi, anti-Semitic...) they say that "This Carlos should be 'taken care of' long time ago, in some way or another".

Check translation of the page's content (from the Hebrew):

He has a reference in Wikipedia; at Google you can find 8 pages about him. But what does the Foreign Affairs Ministry know about him? The Mossad? The Committee of Foreign Affairs and Security? The Israeli Army? Any other element that deals with Israel's security?

Carlos Latuff - an Arabic family name. Born in Rio de Janeiro, 36 years old. In his homepage he is photographed with Leila Khaled, the terrorist who hijacked an Israeli airplane. He is one of the biggest Israel-haters.

He is the headmaster of one of the biggest factories for propaganda and incitements against Israel, he distributes poison in every place. The damage he's doing to Israel amongst youth around the world is enormous. He is one of the most influential Anti-Zionists in the world wide web, an awesome graphic talent, and a great cartoonist. He knows how to influence and use the internet. He is a top player in the Iranian evil industry, and his cartoons participate in the holocaust denial gallery in Teheran.

He hates America & Israel, his cartoons show Israelis and their rulers as demons. He sends missiles of hatred no less powerful than the missiles that Iran is developing, and he takes part in a gigantic genocide industry, with one goal - the destroying of the Jewish state.

His satanic cartoons are published in the world journals, and in endless number of websites. He does not ask for copyrights and he urges people to use them freely.

And what Israel is doing? Nothing!!!

Did they complain to the Brazilian embassy?

Think what would happen to an Israeli citizen that was exposing the leaders of Brazil in this way. Did anybody try to charge him with incitement and attempted murder? Did anybody hear about him at all??

This is the WMD that Prof. Harari, the ex-headmaster of Weitman institute lectured about in the last Hertzlia convention. This is the danger Prof. Yoav Gelbar is warning in his publicity work. That what brings the heads of the Jewish Congress to Israel this week.

The Israeli carelessness on the information front is not acceptable and can't go on. This Carlos should have been "taken care of" a long time ago, in some way or another. The question is: what should we do, and whose responsibility is it to do so?

I call you all to be active. There is no one institute that can challenge this kind of genocidal war. Not the Ministry of Foreign Affairs, nor the Ministry of Defense, or even any other ministry. We have to unite, as Carlos suggested, and act together.

We are witnessing a systematic & basic way of giving legitimacy to hit the "Zionist demon". Carlos Latuff excels at this kind of propaganda. The problem will be solved - the "final solution" - by the Iranian President, who enjoys those drawings & cartoons, Nazi Germany, Holocaust denial, Hizbullah & its rockets. This is the reason he needs those atomic plants, he needs them to kill all those disgusting creatures that Latuff is drawing, and then the world will be a better place. There were others that tried it before, remember?

Goebbels was the propaganda minister of the 3rd Reich and made propaganda a powerful weapon for the Nazi regime. His basic assumption was that a lie said enough times became truth in the consciousness of people. Now
we know that Hitler wrote his books and then manifested them in the
Holocaust. The things that are said against Israel in internet forums & visual elements are copies of the Nazi propaganda. This is an ideology of genocide that has proven its power in the past."

Of course, we can expect anything from IsraHell. If they can carry on "selective killings" of Palestinians, and carpet Beirut with tons of bombs murdering hundreds of civilians, what is the big deal about "neutralizing" one cartoonist in Brazil? Death threats, cheap attempts to terrorize me, however, will not prevent me from supporting Palestinians in their struggle against brutal Israeli occupation. The most that Likud creeps can do is silence me with a bullet, but they will never be able to silence my art.