Institutional racism and torture in Austria

A trial against four police men, who tortured a man that resisted his deportation on 7th of April 2006, has been ended without any consequences on 31st of August 2006 in Vienna. Though the Cruelty was confessed by the officers, three of them were sentencd to 8 months on probation and another officer to 6 months on probation. 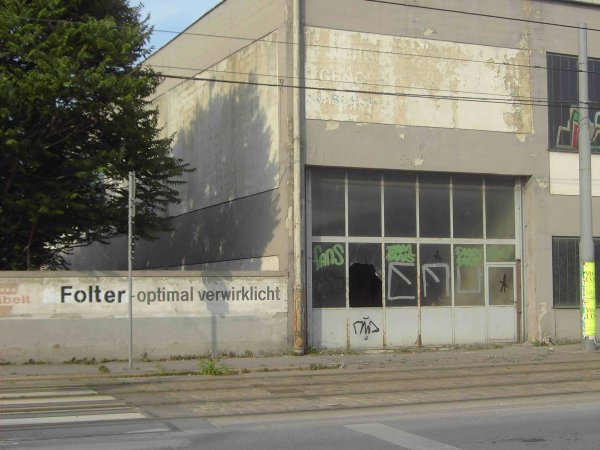 Place in Vienna were Bakary J. got nearly killed by the Police

On the first day of the trial, August 30, the police officers confessed the cruelty, because it was impossible for them to hide what realy happened on 7th of April. They argued that their nerves ran out and presented themselves as victims of the deportation bureaucracy.

Every evidence was against them: The pictures of Bakary J. after he was tortured, the reports of the experts .... also the media reported during the last months on this case. And at least Bacary J. himself, who told what happened with him:

On 7th of April 2006, Bakary J. could prevent his deportation. He told the stewardess that he should be deported against his will, so the pilot denied to pick him up. Instead of taking him back to deportation-prison, the 3 police officers requested a 4th one over telefone, who was in charged of a stockroom situatited in 2nd district of Vienna. This stockroom is being used as a location for trainings of riot police. Bacary J. was being taken there.

Before the torture begun, according to Bacary's voice, the squad leader of the police officers asked him: "Do you know Hitler?" He answered: "Yes, I did, I heared he killed 6 billion jews." The police officer responded: "I hate blacks and jews. You will be number 6 billion and one." The police officers also threatened Bakary J.: "We have the order to kill you". After that Bakary J. was beaten up by 3 police officers very brutaly. A defender of Bakary J. described the scenes as "execution in pretence". Already five months have been passed, but the injuries are still hurting.

The evidences seems not to be strongly enought to convince the court to judge this case of torture. Like in many similar cases justice did not show up. Even when it was proved that police officers had killed one person, they didn't have to fear consequences. Usually they weren't found guilty.

In this case the officers used a new strategie: They told the court that they are guilty. Nobody had expected this before. After questioning the police officers the judge recessed the trial to the next day.

On the next day, August 31, the trial was continued with the questioning of Bakary J. For observers it seemed that Bakary himself was incriminated, because he was asked on a case were he was convicted on drugs. But he had already spent two years in prison on this and so paid his guilt.

You have to know, that in Vienna a racist stereotype exists, which blames every Black man as a drug dealer, as a criminal and dangerous person. Hundreds of Africans are imprisioned and many of them have to stay in jail for a couple of years without any proof. Only the testimony of whitnesses, which are often forced by police or cooperating with them on several reasons on their own will, is enough to convict a Black person for dealing drugs. It is not necessary that they find any drugs on the suspected person. And it is well known that the police use deliberately misrepresentations in trials particularly against Africans. (For more information on this read: The Dangerous Odds Against Black Africans In Austria,

Under this circumstances, the conviction sounds like a bad joke. Three of the police officers were sentenced to 8 months in probation for mistreatment of Bakary J. The fourth accused was sentenced to 6 months because he didn't stop his collegues. This sentence is like an acquittal.

As reaction on the judgement about 300 people marched through Vienna on 1st of September 2006 to protest against the legitimation of torture and against racist violence of police and courts.

Call for spontaneous demonstration against judgment playing down torture

Demonstration Against the Legitimation of Torture by the Austrian Jurisdiction, against Fascist Tendencies within the Police Forces.

With yesterdays (31st of August 2006) sentence the Austrian state has proven, that torture again is presentable. For years now Black People are killed during their detention. Marcus Omofuma, Cheibane Wague and many others are the sad victims of racist practices. The police forces don't have to fear anything from the courts. And since yesterdays sentence it is official that torturing by the Viennese special forces is legitimate.

"I hate you Blacks and Jews" one of the involved officers was accused to say, while Bakari J. was being tortured and threatened with death in an empty storage depot. Sentenced was only the aggravated assault as the "torment of a detainee"� with 8, respectively 6 months conditionally. Which means none of the officers will spend a single day in prison and they all continue their service as nothing has happened.

The question how National Socialism was possible in this country we don't really have to ask, if we see how these fascist tendencies are protected by the courts and how special forces torture and kill without being judged.

Separation of the powers doesn't seem to exist. And the fact that two of the officers confessed their actions, but the prosecutor after the verdict didn't even appeal to court in succession, hints at a state-approved arrangement of a limitation of damage. It's the year of the elections after all!

We won't accept this institutionalized racism and anti-semitism. We won't accept that torturing special forces will be covered by the Austrian courts. Not a second time "we won't have known anything about all this" and we won't be presenting ourselves as the "first victim".

More information about racism in Austria:

Information about the death of Marcus Omofuma
-->