Report/review of 9/11 Press for Truth 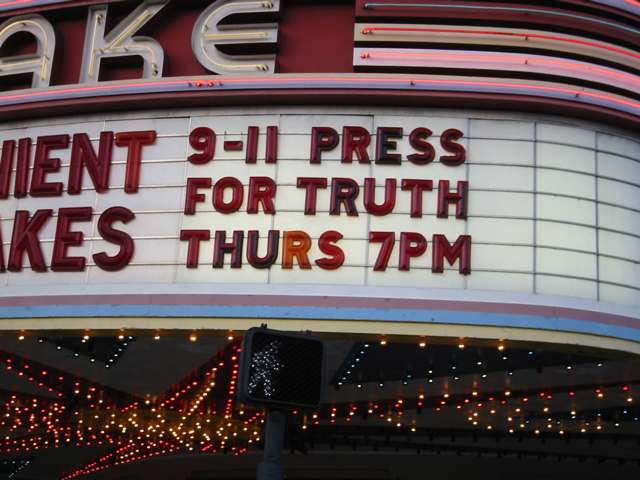 A new documentary on 9/11 drew press and public to the Grand Lake Theater Thursday, September 7, 2006- and promises to have a major impact on public understanding of 9/11.

Last May I got a review copy of an unfinished documentary called 9/11 Press for Truth; I was very impressed and thought that this might be the film to wake up the country. In late August, the film was finished and finally, suddenly, available for theatrical release, just in time for the 5th Anniversary of 9/11. Unfortunately we had already a string of events that we were organizing and promoting and I suggested doing a big event in October, which would give us more time to do outreach. Ken Ellis and Kyle Hence, the co-executive producers decided to go ahead with a national release on September 7th, so we let Ken Ellis organize it, and the Northern California 9/11 Truth Alliance just helped to do publicity and outreach in less than two weeks, not even enough time to put up posters and flyers.

Almost four hundred people attended the 7 & 9 pm showings at the Grand Lake Theater. ABC and Channel 2 also came by for interviews and film trailers. On my way to the Theater I picked up a stack of Silicon Valley Metro’s with “It’s not just conspiracy theorists who want answers to 9/11” emblazoned on the cover- and a great article- Unquestioned Answers- Nonconspiracy theorist David Ray Griffin takes aim at the official 9/11 story by Steve Bhaerman. David Ray Griffin had filled the Grand Lake Theater last spring, and the Metro placed two huge ads, in color of our upcoming 9/11 Film Festival which will feature Griffin in the new film “9/11 the Myth and the Reality” on September 11th.

Although we hadn’t filled the Grand Lake (which can hold almost 700), there was a good crowd and high energy. I welcomed folks and told them a bit about Northern California 9/11 Truth Alliance, Cooperative Research, and the 9/11 Truth Movement, urging them to join us for our 5th Annual 9/11 Truth Rally and March on Saturday, September 9th, 2006, and to pick up the calendar of the numerous 9/11 Truth events coming up. I had finally met Ken Ellis in person, that evening, after trying to help publicize and coordinate the event over the phone, so was unable to sing his praises beyond his major accomplishment of being the Co-Executive Producer of the film. Ken polled the audience initially to find out just who had come. In the “believe the official narrative about 9/11 category” only one person raised their hand. In the “Incompetence category” a good thirty or so raised their hand. In the “They knew and they consciously let it happen on purpose” category, over 50 to 60 raised their hands. In the “they made it happen on purpose category” about 60 to 70 raised their hands. Ken left it at that, but there was a small outcry from the audience from the 5th box category which is very rarely voiced publicly. Ken made it abundantly clear that the film was designed to bring Middle America on the path towards 9/11 Truth, a journey that many of us had already traveled some distance, and not everyone moved at the same rate.

The film centers on the victim’s families, those who met, organized and lobbied for an investigation into 9/11 to get their questions answered, and to prevent future 9/11’s from happening, as one mother said, “to make the world safer for my children.” They went through an amazing experience, dealing with government bureaucracy and with the media. In order to get the media on their side, they had to give the media something- share their very personal grief. The power of the press is enormous, and for awhile they wielded some of that power and won a significant battle- to get a Commission, despite opposition from the White House. However, the 9/11 Commission completely failed them, failed to ask and answer the majority of their questions. Some very powerful evidence and information did come out of the hearings, but never made it into the official report.

One issue that they tried to raise in the media, not successfully, was that the director of the 9/11 Commission, was part of the Bush National Security transition team, a close friend of Condoleezza Rice, who co-authored a book with her; Zelikow also wrote the “Pre-Emptive War Doctrine.” He was a Bush insider directing the staff to investigate some areas and ignore other areas completely. The families demanded his resignation and lost the battle and most Americans didn’t hear about it.

When Michael Moore, Fahrenheit 9-1, and the footage of Bush’s “non-reaction to news of the second plane hitting the building surfaced, the audience applauded the guy who brought out some of the “uncomfortable facts” about 9/11. Greg Palast drew audience applause. Conversely, Kissinger drew a few boos and hisses, clearly the audience could figure out the emerging heroes and villains in a very different narrative about 9/11 that was emerging. The largest applause getter was our local hero- Paul Thompson, a Stanford grad, who started looking at 9/11 in 2002 and came up with an amazing Timeline, which is still growing, although an earlier version of it has been published as a book by Harper Collins.

Paul’s work and the work of Cooperative Research founded by Derek Mitchell is the glue that connects the dots on the 9/11 story and often the source material for the many, many books, and articles that have been written since then, seeking to come to a deeper understanding of 9/11 than the selective, politically motivated narrative that the Commission came up with.

I must add here that I was interviewed by the filmmaker in Toronto in May 2004, (one of many interviews that didn’t make it into the film); he had done an extraordinary number of interviews and gathered amazing clips from many mainstream sources, as well as obscure, hard to find, rarely seen footage. The film doesn’t follow just one person, but jumps from one event to another with a bit of narration and interviews to clarify our understanding. It is very engaging and very emotional. I know it drew tears to my eyes, and few could watch it and be unmoved by the very real pain and suffering of those who lost the people they loved on that terrible day.

It was that pain that kept the widows awake, that got them searching the internet for answers, helped them to formulate the hard questions that needed to be asked about 9/11.

Thompson’s research helped to look at 9/11 in a broader historical context, seeing the birth and evolution of Al Qaeda, its relationship with the ISI and the very close relationship between the US and Pakistan. This is the murky cloud that the press has avoided for five years, except in a few buried stories which are often buried in the paper. Only three quarters of the way into the film, does the stunning information surface about the $100,000 sent to Mohammed Atta under the orders of Pakistan’s ISI General Mahmoud Ahmad. From September 3rd through the 14th Ahmad was meeting with top US officials and became a “great ally” in the war on “terrorism.” This is followed up by the stunning escape of Bin Laden and top Al Qaeda fighters from Tora Bora and a another stronghold in Afghanistan from which a huge number were airlifted to Pakistan.

Laced throughout the film are the official statements of Ari Fleischer, Dick Cheney, Condoleezza Rice, George Bush, which are shown to be lies or misleading or damning when fully understood.

Patty Casazza, one of the Jersey girls, says, very movingly, in the film “They lied. They all lied. Whether consciously or unconsciously, and we need to know why.” My favorite character in the film is Bob McIlvaine who lost his son in the attacks and describes his child who had a sign up in his room that said “Knowledge is Power.” He continues to fight for truth in tribute to his son.

Indeed the message of the film is more than simply getting out some of the facts about 9/11. The film stresses how important media is, how it can mobilize people to support horrendous policy or can be used to demand accountability. The public plays a huge role in electing, tolerating, changing public policy. It urges us all to be more responsible and more active in raising questions, demanding answers, and demanding accountability.

After the film, Ken Ellis spoke briefly again about the need for us to challenge ABC’s upcoming “The Path to 9/11” which seems like the Republican’s hope to cast the blame for 9/11 at the feet of Clinton. David Kubiak, director of 9/11Truth.org also spoke about the challenges in the information battle ahead where we are so outfinanced and outleveraged, but have the strength of truth, growing numbers, the vision of hope, peace and a better world on our side. 911Truth.org is launching Politics 9/11 a campaign to get all contenders for public office to look at the issue of 9/11, and hopefully persuade them to champion for a real investigation and accountability.

Between the two film showings, was a bit chaotic for me, and I missed the first Q &A, beyond setting up the sound system. There was a silightly smaller turnout for the 9 pm showing, but a good crowd. The film was a success on many levels, and so was the event. Ken Ellis brought 150 DVDs to the event, and ran out of them. Luckily I brought an extra case in case he ran out, and was able to supply them to people, along with our usual assortment of 9/11 literature and DVDs.

I hope that I’ll be able to organize more theatrical showings in my neighborhood and in San Francisco. If enough people support it, perhaps we can all get it shown on public television. The plan is to give DVDs to all the legislators in Congress, but I think we need to demonstrate the real demand for 9/11 truth. The polls show that we are many, but we need to make more noise and be more visible. I hope that 9/11 Press for Truth will be the tool that will help us win over the American people, so that the desire for the truth about 9-11 becomes a priority for the majority of Americans and will force a change in the horrendous US policy decisions whose foundation has been an enormous lie.

The theme of tomorrow’s 10 am rally/march at the Panhandle (@Ashbury) is “Impeach the Terrorists!”; it’s time to reframe 9/11 and recognize the true criminals.

(For Details on the upcoming rally/march see http:

9/11: Press for Truth on Google Video

I just watched this film and it's the best intro film to 9/11 truth so far, well worth watching:

And then you will have an idea about what the 9/11 truth momement is about...