The article gives impressions of what the climate change camp was like as a performer, workshop leader, and participant of workshops.
My Experience at the Climate Change Camp near the DRAX Power Station

Just lately, I've come to realise that I was born in 1950 at the time when the great industrial expansion started. As my standard of living has improved I have been contributing a lot of carbon to the atmosphere and so driving climate change . I had been part of the problem, now I was determined to be part of the solution. As a result of my lifestyle and those of millions of others I will leave considerable problems for my children to sort out in the future. It is they who will inherit the suffering generated by climate change when I will be long dead. The government and the majority of people do not understand the great significance of climate change to the age we live in. Most people think that we will just go on as before consuming more and more. I saw the Drax Power station action as part of a new radical approach to pointing out the causes of climate change.

When I arrived at the camp I thought I might face chaos but it very soon became apparent that this was a well organised event. Marquees were already erected, mains water supply connected, and biological toilets installed. I found out that the camp was arranged in districts according to the geographical location where people came from. So I opted to camp in the Oxford group area. Each district had a food kitchen to provide food for people camping nearby, which was totally manned by volunteers. Each morning, I found that there was a meeting in the local area, and any concerns taken to a larger meeting of the camp. I experienced the revolutionary way of working, where decisions were made by consensus, however long it took. Most of my life I had worked with hierarchical structures where elected leaders made all the decisions. I found out that the districts provided volunteers to do many jobs at the camp, such as looking after toilets, cooking, medical services , communications, providing security and mediation. Quite frankly, I was inspired and amazed by the depth and detail of the organisation of the camp which was the result of months of planning..

I'd come to make a contribution by putting on magic shows as Kristoff the clown. I wanted to provide some respite to green activist parents by performing for their children in the kids tent. I found the children appreciative, pleasant and responsive.

I’d also come to help provide music for members of the camp and hold a workshop on writing environmental songs. Our band, the Eco Worriers were well received throughout as people appreciated us entertaining them with traditional songs and our own eco songs.

The most inspiring aspect of the whole camp to me were the 150 workshops dealing with climate change. I attended excellently run workshops on permaculture, peak oil and green futures . This was a massive think tank where people could explore with others radical ideas about how to create an alternative society when climate change had completely and irrevocably demolished the mass consumerist lifestyle. I was honoured to offer my own contribution when I held a green spirituality workshop, based on a book that I had been writing some nine years. My workshop was well attended by deeply concerned Buddhists ,Pagans, Christians, and atheists who indicated that they were deeply concerned about how to change peoples current value systems..

I found the whole experience of the climate change inspiring and motivating. It was a privilege to be with people who were deeply committed to tackling climate change and finding answers. I discovered the people at the camp to be the most intelligent and compassionate I had met in a long time. At least the camp fulfilled the objective of getting into the mainstream media the message that we have to cut our carbon use now. The BBC , ITV, and even tabloid newspapers covered the story fairly sympathetically and it even made the front page of the Independent for two consecutive days. 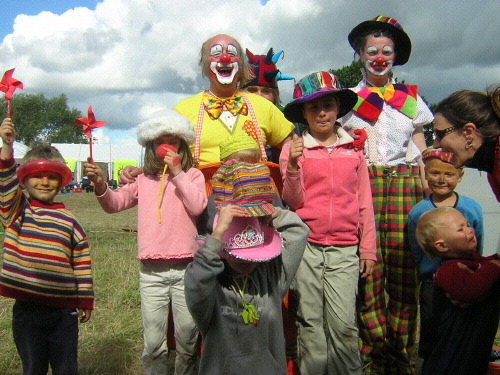 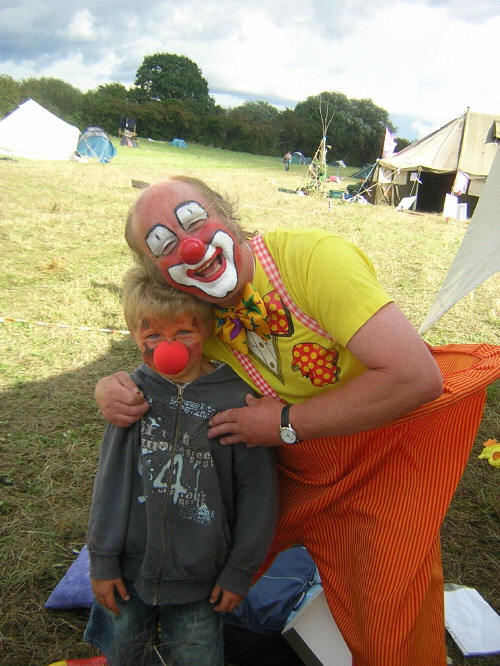 A couple of photos of Kristoff the clown with Camp kids: