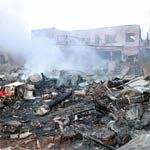 Noordin Mohammad Top just like Osama Bin Laden are shadowy figures that always seem to get blamed but then seem to get away and take along time to be captured, if at all. Then they come back like Freddy Krueger to be blamed for striking another target again, whenever the authorities need a bit of community fear.

Osama's tapes show up on the eve of September 11 and well you know this is propaganda but how come your abc delivers this nonsense to the people without screening it? If I can see it they can see it.

In my mind it is a planted story. What do you think? Is it acceptable for a public broadcaster subsidised by taxpayers? Did the abc ask Nasir Abbas the right questions? Or just enough to warrant question marks about our future, fears and uncertainties? Now that we've been so cleverly 'warned' time and time again prior an explosion and when considerable strength in the hand of the Coalition of the Willing is needed while pursuing their War on Terror. Here is an opportunity to harden the hearts of the Australian and US public against Islamic fundamentalists.

What will it take to convince us over war with Iran? Constant fear until the job is done.

A former leader within Jemaah Islamiah (JI) has told the ABC that the terrorist group's most wanted fugitive, Noordin Mohammad Top, will be trying to launch more attacks this year.

Nasir Abbas says Top, whom he has met, is committed to killing and will use all techniques available to him and his supporters, including smaller bombings or attacks using firearms.

Abbas worries there may be more terrorist attacks in Indonesia this year because Top has ordered his supporters to carry out attacks every year since 2002's Bali bombings.

But Abbas says attacks will occur at the most opportune time rather than coinciding with a particular time of year.

Abbas has also confirmed the existence of a manual being circulated in Indonesia, which describes how to set up small independent terrorist cells.

He says the manual is consistent with JI strategy.

Abbas has cooperated with Indonesian police since his arrest in 2003.

Murdoch’s media empire girds up for a war against Iran

It is not designed to convince, but to browbeat and intimidate. The editorial is one more indication that an assault on Iran is being planned for sooner, rather than later.

But don't believe a word she says because she my friends is a typical CIA agent. Sent to Indonesia to promote some type legitimacy to the alleged 'war on terror' and her 'radical statements' and 'terrorist theories'. And together with her spy mates and the pro-government media who seek to give her relevance because her job is to point the finger to have everyone look the wrong way, at the wrong enemy.

Why shouldn't you be convinced after all gunaratna says he's a dr and reported to be a 'terrorist expert'? He even lives in Indonesia surrounded by bombs going off in his own backyard. But even with his alleged expertise it has only led to even more relentless and 'subsequent bombings' in Indonesia. So I suppose that's how you know you need an expert?

Sure, we should be really angry now, that these terrorists should plot to blow up the Bali mourners! And that should buy hoWARd the coward a free kick to any draconian laws that he now seeks to enforce, based on the communities deep emotions, anguish and fears of another attack?