I case you were wondering 9/11 is not just the anniversary of General Pinochett's US backed coup which installed a fascist government and murdered 30,000 people. Nor is it just the day that the people of New York discovered what it is like to be Palestinian.

It is also the day that Gandhi announced his strategy of peaceful non violent direct action. A way of doing things that would eventually see the liberation of an entire continent and inspiration for many of the great civil rights movements of the last 100 years.

Whether or not such tactics could work now is a matter of debate. One of the first things that US troops did when 'liberating' Iraq was to gun down 'peaceful non violent' demonstrators demanding jobs from the 'Coalition' government. Personally I think that if Gandhi was alive now he would be carrying an AK47 and dedicating his spare time to making roadside bombs.

Anyway, yesterday was the 100th anniversary of Gandhi's declaration. So to remember the great man and his work, 3 women occupied the roof of St.Pauls Cathedral and dropped a banner. Below is their press release. 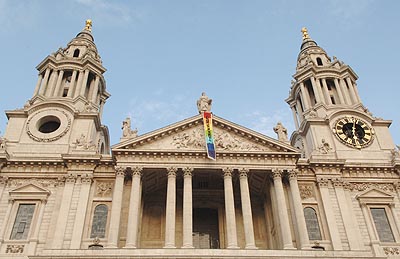 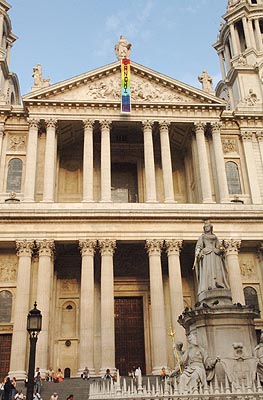 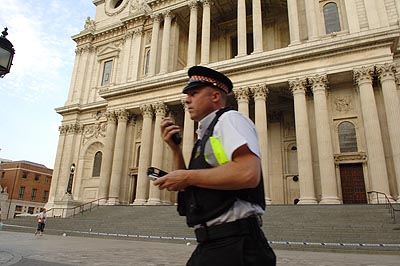 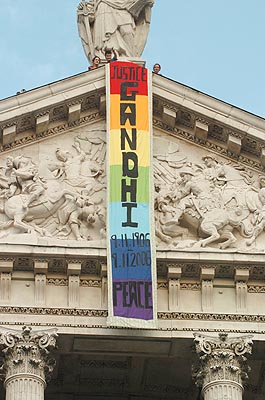 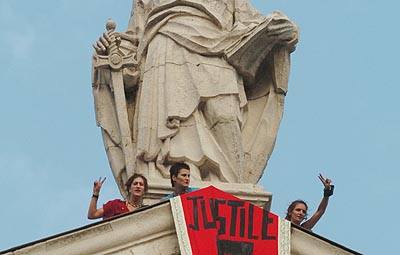 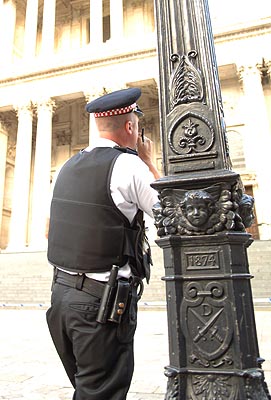 11 September 2006 celebrates 100 years of Gandhi’s Non-Violent- Direct
Action movement: Satyagraha. Gandhi has inspired millions; amongst them
some of the World’s best resistors against injustice eg. Nelson Mandela
and Martin Luther King.
On September 11th to mark this event, three people who believe in M L
Kings words that “peace is more than just the absence of tension it is
the presence of justice” scaled the scaffolding of St. Pauls cathedral
and dropped a banner to show another World is possible.
The activists Mel John, Liz Lindon & Sarah Behr from London said “We
are
doing this to call for peace to stop the ‘Errorism’ by the West. We
want
to remind everyone of their individual significance in preventing war,
poverty and environmental destruction in their every day actions. We
are
each significant and can make a difference- anyone who doesn't think
they can make a difference (because they are too small) obviously
haven't been to bed with a mosquito!”. In the words of Mahatma Gandhi
‘Be the change you want to see in the world’.

On 11 September 2006 South Africa in particular, and the world in
general, will be observing the centenary of the birth of Satyagraha. It
all started at the Empire theatre in Johannesburg when at a meeting
convened by Mahatma Gandhi who lived in South Africa for 21 years, and
it was during this period (when he transformed from a young lawyer to a
Great soul- the Mahatma) that Satyagraha, or non-violent action, was
born.

In opposition to a proposed new legislation in 1906 imposing pass laws
on
the Indian community in South Africa, (some of who had already been in
the country since 1860) Mahatma Gandhi and his colleagues in the
Congress movement mobilised the community to oppose this Bill.
Accordingly a mass meeting was convened at the Empire Theatre in
Johannesburg on 11.9.1906. Gandhi writes about that day, “The old
Empire
Theatre was packed from floor to ceiling. I could read in every face
the
expectation of something strange to be done or happen. ….The most
important among the resolutions passed by the meeting was the famous
Fourth Resolution by which the Indians solemnly determined not to
submit
to the Ordinance in the event of its becoming law in the teeth of their
opposition, and to suffer all the penalties attaching to such
non-submission….all present standing with upraised hands, took an oath
with God as witness not to submit to the Ordinance…. I can never forget
the scene….None of us knew what name to give to our movement,.. a small
prize was therefore offered in the Indian Opinion to be awarded to the
reader who invented the best designation for our struggle.” Thus the
word Satyagraha was coined. Gandhi explains, “Truth (Satya) implies
love, and firmness (agraha) engenders and therefore serves as a synonym
for force….the Force which is born of Truth and love or non-violence.”

Since then the use of Satyagraha as a mode of opposition to oppression
has been utilised by many leaders throughout the length and breadth of
the world. Satyagraha has been recognised as the most formidable and
the
best way of dealing with conflict whether in the home, in society or in
International affairs. Satyagraha was used by Gandhi to win India’s
independence, by Martin Luther King to win civil rights in the United
States, and by Nelson Mandela to win South Africa’s liberation.